Youth mayor has big plans for his 12-month tenure 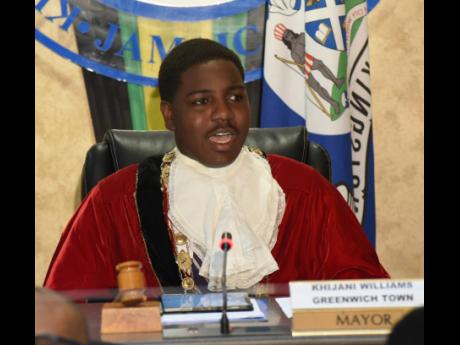 Youth Mayor for Kingston and Junior Councillor for the Greenwich Town Division Khijani Williams has one burning issue he wants to address during his 12-month tenure – he wants to see an end to the abuse and murder of homeless persons in the Corporate Area.

“We do see where homelessness is a huge issue across Kingston and St Andrew and I know it’s something dear to our mayor’s heart, and we have seen where there is the need to protect our homeless and to provide them with the necessary spaces to exist,” Williams told The Gleaner.

“I want to see where we could further address the issue. Just the other day we saw the opening of the Desmond McKenzie Transitional Home. I do believe that’s a nice step towards addressing the issue, but there is more work that we can do to address homelessness across Kingston and St Andrew,” he said.

Williams will be working with other youth councillors to implement approved strategies that will safeguard the lives of the homeless. Those he will announce in upcoming months.

The increase in violence in schools also weighs heavily on the heart of the youth mayor, and he wants to address that as well.

“As a young man who goes to Kingston College, I believe that it’s an issue that is affecting all schools right across the country. We have seen various schools in the news as it relates to violence,” Williams said.

“I believe that as a student, I have that responsibility to play my part in addressing such an issue,” the 18-year-old added.

He wants to partner with the Ministry of Education and Youth’s Just Medz It campaign which was recently launched to address the issue of violence in schools.

Williams said he was deeply humbled and excited when it was announced that he was selected as the Youth Mayor for Kingston.

“I’m hoping to accomplish the dream that we have in making Kingston the Pearl of the Antilles, following the steps of our senior mayor, Mayor Delroy Williams,” he said.

Williams has a love and passion for the operations of local government in Jamaica.

“Local government does play a very important part in the development of our nation. As youth mayor, I plan to make sure that we play our part in seeing to it that that vision is achieved,” Williams said.

He led the mock council event on November 25 during Youth Month with junior councillors at the Kingston and St Andrew Municipal Corporation, where they brought various resolutions to the forefront to address issues affecting youth and others in the capital city.

“We’re hoping that from these issues, we will be able to find our project for the coming year,” he said.

He hopes to study international business or finance at the tertiary level and already has his eyes on universities in the United States as well as Europe, and to be more specific, in Spain and Italy.

He said he intends to choose international business and finance because those two areas are interesting to him.

Williams said after his studies, he intends to return to Jamaica and perhaps enter either politics and/or the financial market.