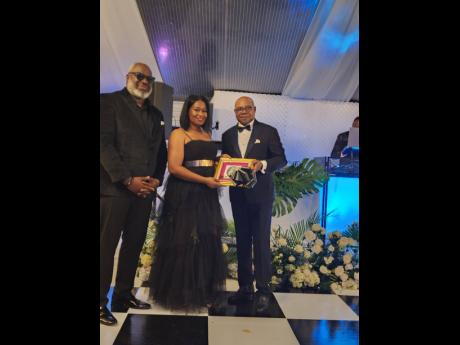 Janet Silvera
Minister of Tourism Edmund Bartlett (right) accepts a gift from Jamaica to Chike Nwobu and his wife Jackie of Munaluchi Coterie during their gala at the Half Moon on Wednesday evening.

Jamaica has recovered 120 per cent of its revenue pre-COVID-19 and the country has welcomed 97 per cent of visitor arrivals compared to 2019, the island’s best year in tourism. This means the country will end the year with just over 2.4 million stopover arrivals.

Minister of Tourism Edmund Bartlett made the announcement during the Munaluchi Bridal Magazine gala at Half Moon in Montego Bay, Wednesday evening.

“The earnings from that will be well in excess of 2019, some $500 million more than 2019. This is very significant, because what it does is to signal that not just that recovery is solid in terms of arrivals, but we have exceeded our expectations for 23 and 24 recovery as was projected,” he told The Gleaner.

According to the tourism minister, the building-out of additional rooms under construction, plus some 6,000 rooms, guarantee continual growth into 2023 and will see the country getting to the five-million stopover and cruise projection much earlier, providing these rooms are ready by the end of 2023.

He singled out the Afro-American market for mention, noting this group had opened up nicely to Jamaica and in fact the rest of the Caribbean. “I think that much of the flow from the US market into the Caribbean region and Jamaica, in particular, have been driven by the Afro-American market. This market is huge, it is a $3-billion market and it has not been tapped into sufficiently. The fact is that they are now the highest spenders.”

He is convinced that the reason Jamaica has been able to achieve 120 per cent on 2019 is a clear indication of the Afro-American spend in the region.

Bartlett said he was excited about the future as far as maintaining the US and Canadian market, even while accepting that there are likely to be headwinds. “As we all navigate the ravages of recovery to inflation and possibly recession, the war, food security issues, as well as energy issues, but the new markets that we’ve been looking at in the Middle East, Africa and India should provide us also with the increment required to keep Jamaica buoyant and strong, even during the recession if it comes,” he said.

Just before the existential threat of COVID-19, some 1.4 billion people travelled across the world, spending $7.9 trillion, Bartlett told the gathering of some 200 wedding professionals from all over the United States and Jamaica.

Weddings to Jamaica, he told them was a big item, and is one of the huge experiential values of tourism.