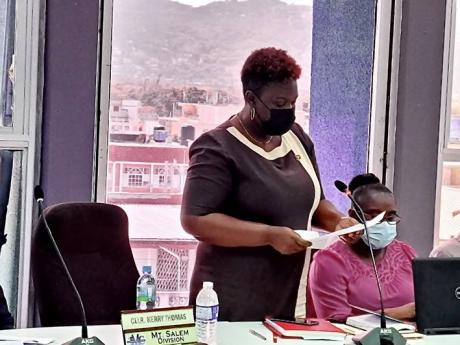 The St James Health Department is to conduct a food handlers’ training seminar in February 2023 for vendors who use sections of Montego Bay, to ensure that they are certified to sell food to consumers and are operating under safety guidelines.

“During the drive, the team had engaged over 50 food vendors, but we have seen that less than 50 per cent of that number showed up for the training. We posit that many of these vendors were maybe apprehensive due to literacy issues or not wanting to lose business, and, as such, we intend to conduct another training in February of next year,” Lewis added. “Vendors are asked to participate, as our public health inspectors will assist them in completing the training programme.”

In response, Montego Bay’s mayor and the StJMC’s chairman Leeroy Williams urged the health department to ensure that food vendors are properly certified, as his office has received reports in recent times about pan chicken vendors’ alleged unhygienic practices.

“We have been getting complaints recently from citizens about the operations of the pan chicken vendors on Fort Street (in the downtown district). We want to regularise their operations, but based on what we have heard, we want you to register them, make sure they are all registered, and we want to give them their vests and IDs,” said Williams.

“There are some problems that must be addressed. For one, I understand there are persons there who are selling food without food handler’s permits, and there are persons who are not cleaning their pans the way they ought to,” Williams explained. “So, I am going to ask the Public Health Department to visit them regularly and see that they conform to what the standard is.”

Food vendors in Montego Bay came under scrutiny in April this year, following a revelation from the St James Health Department that of approximately 600 food vendors operating in the parish, only 30 were found to have valid food handlers’ permits.

The StJMC reported that it had made multiple efforts in the past to get vendors compliant with health and safety regulations, including having them sell in designated sections of Montego Bay, such as the Charles Gordon Market.

Other measures include the health department’s thrust in 2017 to engage vendors in hygiene and cleanliness training as part of efforts to counter Montego Bay’s perpetual rat infestation problem. That training was held alongside a rat-baiting exercise along the Jimmy Cliff Boulevard, then known as Gloucester Avenue, a location where several food vendors often sold items such as jerked chicken and soup in the evenings.

During Thursday’s meeting, Lewis also sounded a warning for shoppers to be mindful of buying meat during the Christmas season, as unscrupulous people might try to sell meat that has not been inspected and deemed safe for human consumption.

“One of the activities of our Environmental Health Unit is a meat hygiene enforcement drive targeting all the major supermarkets, meat shops, and the meat market. With the Yuletide season, persons will be attempting to distribute uninspected meat for sale, so we are going to be ensuring that we will be doing our enforcement actions to ensure that these meats, which are unfit for human consumption, are not continued in the food trade,” said Lewis.