Judge hints that some testimony about gang-linked soldier credible 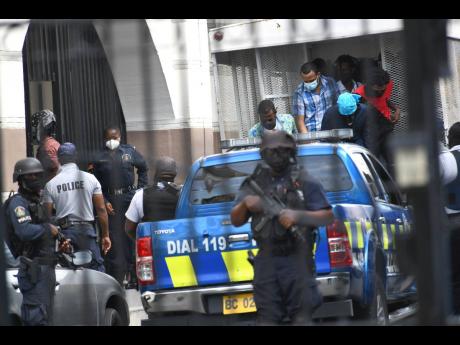 Although there was no mention of the ex-soldier and his alleged membership in the Clansman-One Don Gang in statements given by one of the prosecution’s star witnesses, Chief Justice Bryan Sykes acknowledged that the evidence suggested some truth in the testimony about the former army man.

The self-confessed gang member, who described himself as the organisation’s banker and personal driver for reputed leader Andre ‘Blackman’ Bryan, had testified that defendant Jermaine Robinson was one of Bryan’s bodyguards. He also told the court that Robinson had visited his home several times and had guarded Bryan with a gun, which was kept by the witness.

The witness also told the court that Robinson confided in him that he was a member of the Jamaica Defence Force (JDF) and that he had seen him with a broken arm at one point.

However, the witness had not mentioned any of those claims or even made any mention of the soldier in his statement, but pointed out the soldier during a dock identification of other alleged gang members ahead of his evidence-in-chief.

The witness acknowledged that he had forgotten all about the soldier but told the court that he knew him to be a member of the gang and had spoken to him.

Attorney-at-law Roxaine Smith, during her cross-examination of the witness, had suggested that his omission showed that he was fabricating stories about her client. She said further that it was not possible for her client to have been in a gang as he was transferred to St James shortly after his training.

But Justice Sykes, during his summation of the ex-gangster’s evidence on Tuesday, said despite the defence’s suggestion that the witness was lying, the evidence from the JDF confirmed that he was a member of the army and that he had suffered some kind of injury to his right arm.

The evidence, Justice Sykes said, also indicated that Robinson was placed on sick leave after he was initially allowed to work but was excused from certain duties.

The judge also recalled that Robinson, in his unsworn statement, had also acknowledged that he was a soldier and that his right arm was broken and he could not operate a gun then as he was not ambidextrous.

But according to the chief justice, the evidence “was consistent with the observation of Mr … regarding Mr Robinson, although the medical does not use the term broken arm.

“How would he know these things?” the judge asked.

Further to that, the judge pointed out that Robinson’s assertion that he had visited Jones Avenue in St Catherine to look for relatives and friends showed that the witness was not fabricating a story when he reported having seen the ex-soldier on the road, which the court heard was the gang’s headquarters.

Consequently, Justice Sykes said the omission has to be viewed in a broader sense. He also questioned what the witness had to gain “ from being soft” on the defendant when he had left him out of his statement.

Bryan and 26 other alleged gang members are being tried on an indictment with multiple counts of offences under the Criminal Justice (Suppression of Criminal Organizations) Act and the Firearms Act.

One of the defendants, Andre Smith, was shot and killed last August while he was on bail. Five others were freed.