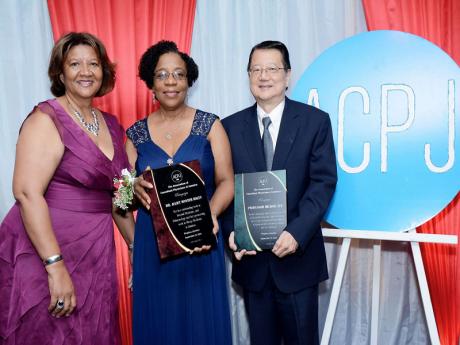 From left: Dr Althea Aquart, president of the Association of Consultant Physicians of Jamaica, with honorees Dr Juliet Wynter-Daley and Professor Michael Lee, who were honoured by the association at the annual President's Reception and Banquet at The Jamaica Pegasus recently. - Contributed

Graduates of the DM (Internal Medicine) programme of the University of the West Indies (UWI), 2005-2014, were also recognised at the event.

The honorees, Professor Lee and Dr Wynter-Daley, have really excelled in their fields. Dr Lee read medicine at the UWI, graduating in 1976 before entering the residency programme at the UWI, and obtained his DM (Inter Med) in 1981. Following this, he became a clinical fellow in gastroenterology at the Royal Victoria Hospital and the University Hospital in London, and Ontario, Canada, then research fellow in the same field at both institutions. He obtained the Fellowship of the Royal College of Physicians of Canada in Gastroenterology in 1986.

Dr Wynter-Daley also obtained her medical degree at the UWI, on a full Government of Jamaica Scholarship. Following obtaining her MB BS degree in 1977, she entered the residency programme in internal medicine (the DM programme) at the UWI, from which she graduated in 1983.

Dr Wynter-Daley went on to practise as a consultant physician at the Kingston Public Hospital in 1985, then did a fellowship in pulmonary medicine at Wayne State University in Michigan in the United States, which she completed in 1990 and then went on to pursue an additional fellowship in Sleep Medicine there, leading to her becoming board-certified in sleep medicine.

On her return to Jamaica, Dr Wynter-Daley began her pioneering work in sleep and the expansion of the scope of pulmonology. She introduced Jamaica to sleep medicine and established the first sleep lab when she opened The Sleep Disorders Centre at The Medical Associates Hospital in 2001. She also performed the first fibre-optic bronchoscopies here.

In 1995, Dr Wynter-Daley was appointed senior medical officer at The National Chest Hospital and served in that position until 1999, when she relocated to Mandeville where she continues to serve as a consultant physician at the Mandeville Regional Hospital and consultant pulmonologist in private practice.