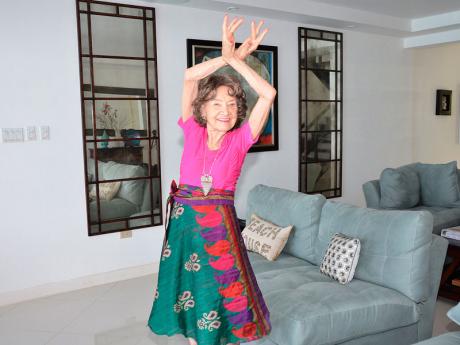 Tao Porchon-Lynch showing off one of her popular yoga moves during an interview with the Outlook Magazine at the Dreamtime Villa in Mahoe Bay, St. James. 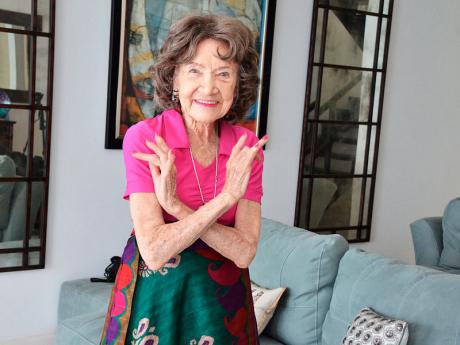 Tao Porchon-Lynch is renowned for this famous movement of her fingers. 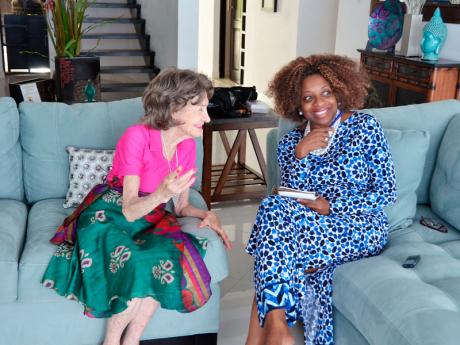 The Guinness Book of World Records' oldest yoga instructor, Tao Porchon-Lynch, selected Jamaica to complete the book on her Life-Dancing Light: The Spiritual Side of Being Through the Eyes of a Modern Yoga Master.

The 96-year-old, who revealed that nature is her encyclopaedia for life, visited the island 10 years ago for the first time, and returned last week, because "Jamaica offers incredible natural beauty and is a source of inspiration. I wanted to be in a wonderful environment and review the manuscript for my new book," she said.

"I hope readers will be inspired to live to their highest potential and dance to their own rhythm after reading my book," she told Outlook during an interview at the Dreamtime Villa in Mahoe Bay, St James.

Born in India, Porchon-Lynch, who walked with Mahatma Ghandi twice - first at age 12, and again at 16, and who worked in the French underground with General Charles de Gaulle against the Germans during World War II, said the country that inspired the king of reggae, Bob Marley, and is home to the world's fastest man and woman, Usain Bolt and Shelly-Ann Fraser-Pryce, is a place she has always wanted to return to.

Referring
to age as just a number, the incredibly positive Porchon-Lynch, who has
had three hip replacements, a broken wrist, a fractured finger and a car
accident that left her slightly deaf in one ear, has gone on to win
more than 720 dance competitions since 2005. She says fear never enters
her mind, neither does negativity. Whatever she does, she says she never
thinks of getting old.

"It doesn't interest me. I don't make
fear in my mind about anything."

Her positivity led
her to start competing at age 87. Her first dance partner was 22 years
old. The last time she competed was three weeks ago in Orlando, Florida,
and, yes, she won.

The power of
positivity

Porchon-Lynch says there is nothing she
feels she can't do, owing to the fact that one can do anything they set
their mind to. "That power is within you." She also doesn't subscribe to
negative thoughts.

"If you approve negative thoughts,
negative actions will come through. So when you wake up, know it's
going to be a wonderful day. Think positive and that is what will come
through," she tells Outlook.

For
Porchon-Lynch, no day is the same.

"I simply wake up
and know that this day is the best day of my life! This is my
meditation. Nothing is impossible."

With no apparent
lifestyle disease, no diabetes, no hypertension, no problems of the
heart, Porchon-Lynch said she does not believe in killing anything, and
eats only fruits and vegetables. No meat or fish.

"I
eat very little food, mainly a grapefruit in the mornings,. I may eat a
little bit for lunch, but I eat fruits and vegetables, and drink
naturally made fruit juices, which are full of energy. I don't drink
water; I only wash in water."

According to the yogi -
who did a class with 60 persons at the Round Hill Hotel and Villas in
Hanover during her visit - the ground has all the food we
need.

Using the trees as example of the incredible
energy she gets from nature and how her own life is recycled,
Porchon-Lynch said, "Look at the trees moving around. They are hundreds
of years old. Some of them, when you look at them, the leaves have
fallen off and some of them look as if they are dying, but in a few
months they are born again. They are recycling
themselves."

Still practising what she learnt when she
walked with Ghandi, Porchon-Lynch says there is a oneness in this world
that must be brought together.

Her words would do
well as advice to warring factions worldwide. "We can all have different
ideas, but we must share them and bring them together for good, not
against each other."

As a yogi who is spiritual, but
not religious, Porchon-Lynch, says that yoga helps one to tap into the
eternal energy. "When you're really doing yoga, it shines through
you."

Admitting that there were many physical benefits
to yoga such as flexibility and strength, she says, more important, it
is the pathway that opens up to your inner life and wisdom. To this
master, it doesn't matter what your religion
is.

"Truth is one; sages call it by many names. It
doesn't matter what your religion is. Yoga opens you up to the beauty
and oneness of life."

Yoga with a
difference

For years, Porchon-Lynch taught Iyengar
yoga, which she says is beautiful, but has embraced what she calls yoga
with a difference. "Yoga from the breath of life. I think this is what
most people haven't learnt, how incredible this energy is. I teach more
or less from that point of view. If you are not using that energy, then
you are weak."

According to Porchon-Lynch, yoga is a
feeling that is within you. "I don't pray outside of myself. I pray to
what is within me because I know that is the Lord of Creation. So,
whenever I have some problems, I look within myself and find the
answers. The answers always come," she said.

Married
twice, Porchon-Lynch boasts of having more than 400 children - all of
the wonderful teachers she has trained.

"So many of my
students come to me and say, 'You have changed our lives'. I didn't
change it. There was a power inside of them that was dormant. All the
power in the universe is right inside of you," she
said.

Porchon-Lynch plans to return to Jamaica in
April 2015 for a yoga
retreat.