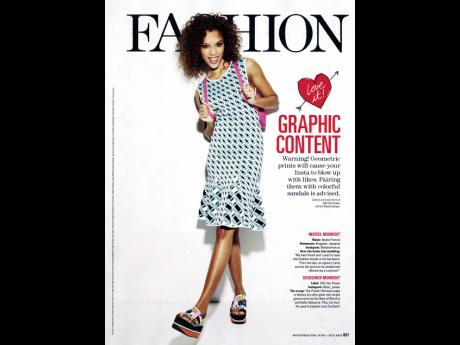 Pulse rising star Alysia Francis is the latest Jamaican international model to be featured in a major fashion glossy. The 2014 member of Hillel Academy's international baccalaureate graduating class, has decided to pursue her dream of modelling and now has both feet firmly planted on the first rungs of the ladder, with her appearance in Seventeen Magazine.

Francis, who was introduced to the international market last year, commenced her career in 2015, and is looking to expand her footprint in the global market that includes the major fashion capitals - London, Paris, New York, and Milan. Francis, as well as her parents, Celia and Jeremy, who have a very keen interest in her development, are naturally delighted by her success. There is undoubtedly a lot more to come.

Her agency Pulse, is equally thrilled and feels vindicated, given their faith in this unique hazel-eyed beauty. The market has been very receptive and some of the comments have been positively gushing. "Stunning," is how Delpha Ramos of Elite described her; "we love her!", was the response from Kristen Bolt at Marilyn's; 'really exotic" came from Pamela Frank at Ford and Kwok from The Society - the agency of Kendal Jenner, declared her "the face to die for"

Francis is currently signed to Marilyn's, whose chief offices are in Paris and New York. Marilyn's has been home to a number of Pulse models over the years including Lincoln Wynter, who started his international modelling career at the agency's Paris office.

Francis includes carnival and going to the beach in her list of favourite things. She loves kickboxing which she considers to be "the best workout ever!"

Her main goal is "Living a life I love and having a job I look forward to waking up to every morning." She also wants to travel, which will no doubt come with modelling. And she adds, "Do all I can to make my mark, help others, and meet amazing, intriguing people along the way. Have incredible experiences."

Ballet, modern dance and French are among her special skills, but she loves cooking, animals (she is currently a JSPCA volunteer), BeyoncÈ, and confesses that her latest obsession is following an amazing filmmaker, Casey Neistat's YouTube channel. "Actually, speaking of goals, he's a great inspiration - he's living an awesome life and doing what he loves."