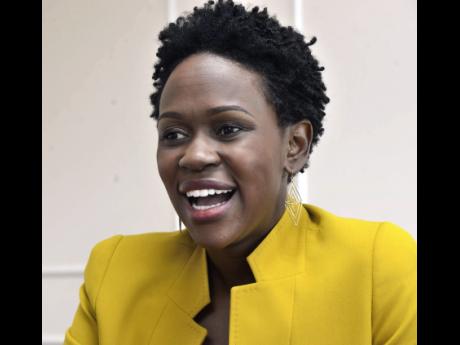 Ian Allen
Ian Allen/Photographer Her almost constant smile is a testament that she is a true people person. 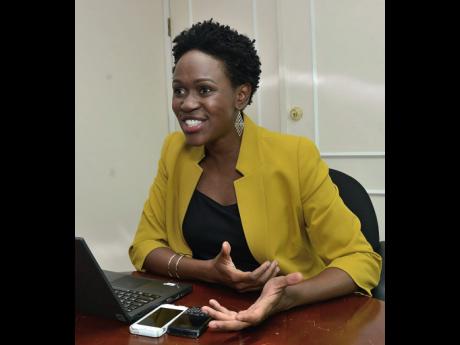 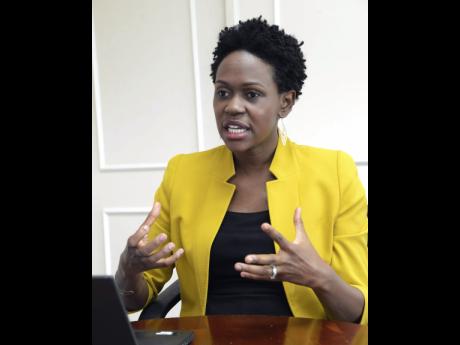 Mariame McIntosh Robinson is a people person. The Harvard graduate and Rhodes Scholar from Kingston has a penchant for tackling the most challenging tasks.

“At MIT (Massachussetts Institute of Technology), I did electrical engineering because it was known as the most difficult, and I thought, ‘How difficult could this be?’”

McIntosh Robinson is a partner at Portland Private Equity, a private equity fund that provides equity capital to companies in the Caribbean and Central America. On a recent mid-morning meeting with Outlook, her bright smile was nearly constant as she explained that her experience at MIT almost never happened. After graduating from Immaculate Conception High, her plan was to attend the University of the West Indies. She credits her father, Patrick McIntosh, for her time at MIT, as it was he who encouraged her to go after a spot at some of the top universities in the United States. She remembers him always saying, “Apply first, then figure out how you’re going to fund it.”

And she did just that. When she got in to MIT, she told Outlook, her loosely crafted plan was to graduate then return to Jamaica and work at the Jamaica Public Service Company.

But fate had other plans. Attending school on loans and grants meant McIntosh Robinson had to work while attending university. She landed a job at General Electric (GE) in the summer of ’94 to help offset school costs. During her first summer at GE, she did some work on the company’s ultrasound machine. Her bosses were impressed. She was told she was great with people so she should consider moving into the entity’s financial division.

“Everything that has happened to me has been someone looking out for me,” she said. In the

working at JPMorgan and got into consulting.

When she graduated from MIT, McIntosh Robinson continued in

management consulting at Integral Incorporated. This suited her well as she was always a big thinker and problem solver. It was a move that she thoroughly enjoyed. Always ambitious, however, she wanted to move up the ladder but without a graduate degree, that wasn’t happening. She wanted to attend Harvard Business School, but when she talked things over with her father, he recommended that she apply for the prestigious Rhodes Scholarship.

She was successful at landing the coveted scholarship to read for her MPhil in Economics at Oxford University in England.

She told Outlook that, after Oxford, she thought, “Now back to consulting so I can get promoted.” McIntosh Robinson said that, at that time, McKinsey and Company, a popular consultancy firm, was heavily recruiting Rhodes Scholars. “I interviewed with them and got into their Atlanta Office. The way you do well in consulting, you have to develop mentors and work on projects that will give you the right skills so when the position comes up you’re ready. No one is there managing your career, so you have to do it yourself.”

Before even going to work at McKinsey, McIntosh Robinson had already been accepted to Harvard Business School. “I had applied to Harvard Business School and turned it down to go to McKinsey. The position I was getting at McKinsey was the position I would have gotten coming out of Harvard, so I thought, why spend all this money?” But it wasn’t long before her desire to keep growing academically took over. She worked at McKinsey for two years before deciding to go back to school.

“When you are a minority in America and a woman, you must ensure that you get the proper skill set. You don’t want people to move you along a promotion point; you want to be good at the key, the core, and hardest. By hardest, I mean the things that produce the most money for the business. You want to be indispensable. So I reapplied and went to Harvard Business School in 2004.”

She had her sights set on tackling big issues when she left school.

“I was still driven that the thing I’m working on has to be difficult to figure out. I didn’t want to get an ‘easy breezy’ task.”

Straight out of Harvard Business School, McInstosh Robinson went to work at Bain and Company. “I wanted to be in New York. I had family there. It was in the northeast. It was hard but in a good way, and the New York office was a satellite office, so I was building a culture as opposed to being the recipient of a strong culture.”

Like she did at Immaculate where she was the valedictorian for her graduating class; at MIT where she earned the highest GPA award from the National Society of Black Engineers; at Harvard Business School where she was the co-recipient of the Dean’s Award for outstanding leadership on campus, she excelled at Bain and Company.

“I was the first female black person to be promoted to the manager position,” she disclosed

How did she handle it? “You have to develop mentors. You have to make people like you so much that they want to mentor you. You have to form authentic relationships, and not just network for networking’s sake,” she said. “The ability to succeed at a job is not about your ability to do the content of the job really well. It really has to do with your ability to get into the culture and foster the relationship with people around you. Lots of people miss out on the softer skill component of the job. The relationship is as important, if not more.”

At only 34, McIntosh Robinson seemed to have had it all figured out.

“I was going to stay at Bain and become a partner and do my education thing on the side, fly down to Jamaica a few times per year and hire a team. Life was good,” she said. Her ‘education thing’, is her non profit -TEACH Caribbean. She formed TEACH Caribbean along with other Jamaican Rhodes Scholars after obtaining $60,000 of seed funding from Rhodes Trustees to launch an educational NGO. TEACH Caribbean is focused on improving access to quality education for economically disadvantaged youth. The organisation started at two high schools in Jamaica – Mayday High and Mile Gully High in Manchester. The students enter the programme after first form and are tutored in maths and English Language. “I also wanted to add science to the programme but maths and English (scores) were very bad and these are fundamental subjects in life,” McIntosh Robinson explained. The same set of students return every year, and are taught by Rhodes Scholars alongside local teachers. “Class sizes are no more than 15; we use very interactive methods. We just completed year three,” she revealed proudly, noting that May 2017 will be the telling year based on how well these students do in CSEC examinations. “If they do well it would be good. It would be like a score. If not, (we could) try something else like teacher training. If it doesn’t work you fix it. You can’t say, I want to do this, I want to do this,” she said.

The Jamaica National Building Society this year got involved and asked TEACH Caribbean to expand its programme. So now the organisation also operates at Islington High and Brimmer Vale High in St Mary.

McIntosh Robinson is married to state minister Julian Robinson. The two had dated after meeting at Oxford but separated after his studies as he was intent on returning home. But the two could not stay away from each other for long. They got married in December 2013.

Their son, PJ, recently celebrated his first birthday, and McIntosh Robinson shared with Outlook how motherhood and marriage have changed her. “The biggest change is a strong sense of desire to live as long as possible because you want to see your child grow up. It gives me a renewed focus; I have to be healthy and live as long as possible to be there for my child and husband.”

Speaking of her marriage, she continued: “The pure love you feel that someone has your back. If you have problems you work it out in a safe space. When you’re married, it’s more authentic,” she said.

Today, McIntosh Robinson is happy with where her life is, but that doesn’t mean she has become complacent. “I think the Lord put me back in Jamaica. It’s hard to be a citizen and just sit back. There are so many issues to tackle. When I was in New York, I never felt that urgency. My passion is, how can I have an impact in Jamaica on education and entrepreneurship? Education still inspires me. I get a lot of energy from it.” So now she is focusing on having all apsects of her life work in harmony. “All the things you’re interested in should all be connected, and should be seamless and that’s when you see that you are in the right position,” she said.