Reid on Verbal Abuse: Part One 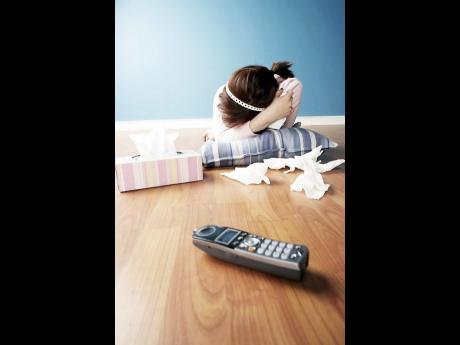 They often say "sticks and stones may break your bones, but words will never hurt you." The reality, however, is that while the physical damage may leave telling scars, the emotional turmoil can wreak severe havoc on a person's psychological state of mind.

So, as we explore the issue of domestic violence, we highlight a different traumatic aspect of the spectrum known as verbal abuse. According to counselling psychologist of Family Life Ministries, Andre' Allen-Casey, "Verbal Abuse (whether it is done once or several times) is the deliberate use of words with the intent to humiliate or undermine someone's character and or dignity."

Today, we share the story of 35-year-old Kai Reid* in a three-part series.

This mother of two seemed to have it all - two wonderful children, a hard-working husband and a beautiful home. But lurking beyond the 'happily ever after' veneer was a shaken woman who felt unworthy of love and affection.

Reid told Outlook that the abuse started six years into her marriage when she found out her husband was having an extramarital affair. "A woman can always tell when something is wrong, but sometimes we don't want to face it even when it's right there in front of us," she revealed.

Instead of owning up to his wrongdoings and taking responsibility for his indiscretion, he blamed Reid for calling the infidelity upon herself. "He said that after a while, he found me unattractive, which resulted in him losing his desire to be intimate with me. So according to him, he had no choice but to indulge in his needs elsewhere," she confessed.

For every problem, there are warning signs, and for Reid, the signs came from her parents. They had already summed up their new son-in-law, as no good, and had not approved of the union. But because their daughter loved him, they grew to tolerate him. They footed the wedding bill, took them in so they could save for their house, and went on to give them start-up furniture - beds for the babies - just so that Reid could somehow contribute to the household. But that was not enough for her husband.

A year into their marriage, Reid's husband claimed that his wedding ring was damaged, an incident she said she should've taken as a telling sign of his intentions for their marriage, "He didn't look like a married man when he was on the road, making him available for any other women who came his way, and he didn't play in making use of the opportunities presented to him," she discovered.

Nowhere to be found

He began nitpicking at everything she did. "I could never question where he was and where he was going. His job required his undivided attention, I would call work out of concern and would be told that he was not there. So, where was he?" she expressed.

Reid spent most of her days home with the children, and after preparing a home-cooked meal for the family, she would give him a call, just to figure out where he was for proper timing. She believed that since he worked so hard, he deserved to have dinner hot and ready when he got home.

It was there, however, that she would meet her nightmare. "When I'd ask him where he was, just so I could coordinate his arrival, he would create a big issue about my constant calling, which was followed by his usual response that he was on the road. By the time he got home, we would argue and he would no longer be interested in dinner or me for that matter. He later revealed that he didn't like my cooking, which was his reason for not eating dinner at nights," she disclosed.

When it came to their sex life, according to Reid, there wasn't any physical attraction for her as far as her husband was concerned. "Being with the babies all day, I would look forward to spending some quality, adult time with him at nights, but to no avail." She recounts his days of calling her fat, nasty and telling her she was not sexy.

After consistently hearing the same comments from him, the faÁade he created became the real deal in her mind, and she became self-conscious, having seen a change in her body after having children. This, she said, he used as an excuse to shy away from their fantasy world, when in reality, he was already being satisfied on the road.

Reid's husband went as far as to say that his marriage was a mistake -something Reid would often hear from mutual friends, "He referred to our marriage as ball and chain, and used to say 'Marriage have teet' and would bite. What I didn't expect was him divulging our personal problems to our friends, and I was shocked when they told me. But they would look at me with such pity that I knew they were aware of our issues."

His reason for this, she surmised, was that since they got married at an early age, and started their family soon after, he had not been able to explore his wild side, and as a result, it was unleashed in an untimely manner.

"A lot of his peers were out running wild at the age he had been married, and it was as if I robbed him of it, so he was resentful towards me," she asserted.

Allen-Casey explains that persons who are verbally abusive are resentful. "Resentment is a negative mood caused by focus on perceptions of unfairness. Resentful people feel like they are not getting the help, consideration, praise, reward, or affection they believe is due them."

She noted that he was even upset that she had a double-barrelled last name, insinuating that she was not all that into their marriage, when he was actually the one out there playing "hokey-pokey". This was an insight into the control he wanted to inflict over her life.

Reid begged him to stop the cheating, to come home and be with his family, but he became even more engrossed in his professional life and extramarital affairs.

One day, they received an all-expense-paid getaway from a family member to the north coast. With the children taken care of, they were left alone to rekindle their love flame. Instead, her husband treated it like a prison sentence - sulking every step of the journey - expressing how annoyed he was for being there, all the while having high hopes for an escape, to return to his lustful world back home. Reid felt defeated, deflated and emotionally destroyed.

Join us next week, as we discuss Reid's battle with power and control in her marriage, how they tried to reconcile for the sake of their family, as well why she stayed in the first place.