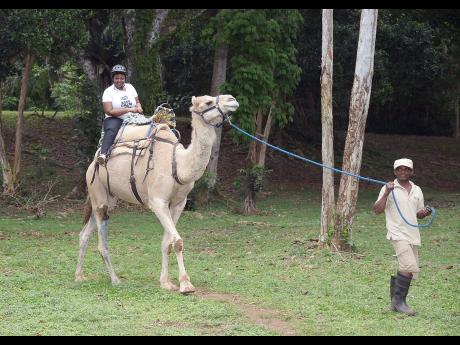 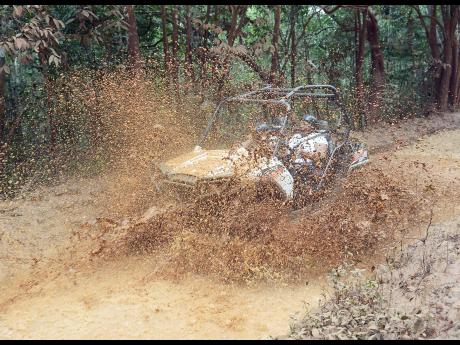 Gladstone Taylor
Anyone up for a mud bath? It's a dirty job, but Davi is up to the task! 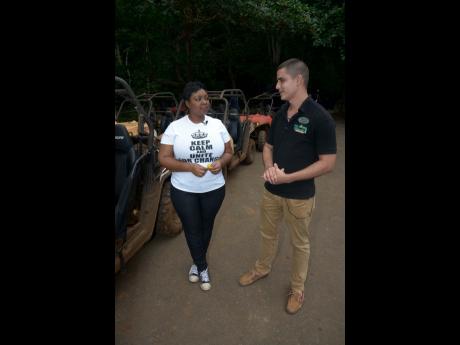 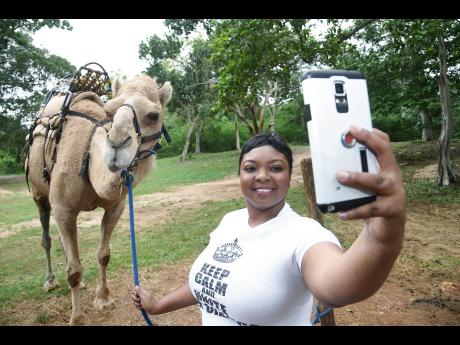 Gladstone Taylor
On to the next adventure, but first, lemme take a selfie! Davi strikes a pose with Moses after her camel ride. 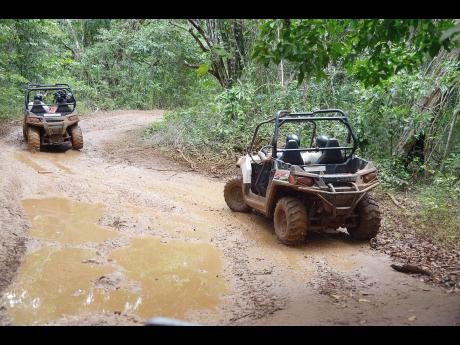 Gladstone Taylor
Off-roading at its best! Davi tries her best to navigate the muddy terrain!
1
2
3
4
5

No, I'm not in Dubai. In fact, I haven't even left the island. I am in the banana parish of St Mary - Prospect Outback Adventures was my destination, and man, was I in for a treat! Offering six tours including Horseback riding, a culinary tour, and a segway tour, I knew I was in for a fun and exciting time.

Based on the time frame, I decided to do three of the tours, the first being the tractor-drawn carriage tour. With more than a 1,000 acres to explore, the hour-and-a-half tour immediately piqued my interest. I hadn't visited a plantation since my high school history class days, so I was beyond excited.

As soon as the tractor started, I activated my 'Dora The Explorer' mode. I felt as though I was on a Safari. Our tour guide, Donovan Clarke, was hilarious. I found out that the property belongs to the family of the late Sir Harold Mitchell, who obtained it in 1930. We made a brief stop at a coconut tree, which Donovan dared me to climb. Being the country girl I am, I immediately decided to take on the challenge. I had barely started my ascent, when I realised that that was the furthest I could go. "Try it again," the tourists urged me. Once again, I was left huffing and puffing at the base of the tree, still unable to get both legs up.

I was a little disappointed and embarrassed, but I figured no one else would give it a try. I was wrong. Farmer Brown came and ascended the tree in less than 30 seconds. I was baffled. After climbing down, he treated us to coconut water and coconut with brown sugar. I was immediately taken back to my childhood days.

We finally got to the Great House, where we witnessed tourists taking the culinary tour titled 'Flavours Of Jamaica'. I wanted to join in, but the camel ride was next, and while I am a foodie, I was not about to miss that.

I put on a brave face, but to be honest, I was dreading it. I had never ridden a camel before, and I had no idea how I would fit on the humps. Donovan assured me that I would be OK. I put on my helmet and made my way up to Moses, the camel. Riding him was the least of my fears, as I spent quite a few minutes trying to actually mount him. Finally, I was aboard. It was a bumpy ride, but I was thoroughly enjoying every second of it.

Proving that I had indeed chosen the right camel, Moses insisted on stopping every few feet to try and reach the tree branches for a quick snack. I was able to grab some branches to feed him.

"A my camel diss fi real! We nah move wid out food," I said.

The ride was over before I wanted it to be, and I was once again left trying to figure out how to climb down. "Stoop down, Moses," I tried to coax him. I was talking to myself, as he did not budge. After a few unsuccessful attempts, I finally managed to get down. Wanting to savour the moment, I snapped a quick selfie with Moses.

At the central area, I met the manager Alexander Sale, who confirmed what I had already figured out, "This is a unique attraction."

After handing in my driver's license, it was time to 'do road'. I was extremely nervous at first, as I had never been off-roading before. The tropical scenery was breathtaking, but I could hardly focus on the amazing views, as the hilly, winding terrain required my undivided attention. I tried my best to keep up with the tour guide, but I slowed at every turn when I saw a mud puddle.

Determined to end the ride as clean as possible, I was half-way through the journey, when we came across a huge puddle, the size of a swimming pool. There was no getting around this one - I would have to go through it.

I mustered up all my confidence and pressed gas! Waves of mud entered the buggy, leaving me with mud in creases and corners that I would rather not mention. I was left sputtering as mud had even entered my mouth while I was screaming.

My hopes of returning clean as a whistle was thwarted, but it was worth every mud stain. Prospect Outback Adventures was definitely one of the most amazing days I have ever had. I definitely went for the fun, and stayed for the memories!