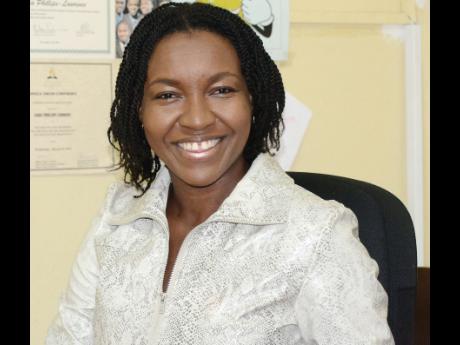 As a teenager, Fabia Philips-Lawrence had a normal menstrual cycle. By the time she got to her mid-20s however, things started to go awry.

A doctor's examination revealed nothing untoward. He simply advised her to carefully monitor the way she administered her pain medication. But the pain did not go way. In fact, it was getting worse with each passing month.

"Then came the frequent urination. My husband would say, 'Fay, you have to do something about this'. I would be getting up five times in the night and it would be disturbing him," she said.

She continued, "I used to exercise a lot and then realised that, while jogging, there would be a little punching pain in my side. When I was doing abs exercises I would feel the same sticking pain."

Lawrence again sought the help of doctors. One told her the pain could be dysmenorrhea (painful menstruation) and another thought it was endometriosis (a condition resulting from the appearance of endometrial tissue outside the womb, causing pelvic pain).

She was put on contraceptives and ended up bleeding for 14 days straight. Nothing was the same after that. "My normal five day period went to seven."

The condition was affecting her sleep and on the really bad days, she had to call in sick to work.

On the advice of her mother, Philips-Lawrence went to visit an iridologist. Iridology is an alternative medicine technique whose proponents claim that patterns, colours, and other characteristics of the iris (eyes) can be examined to determine information about a patient's health. Though sceptical, Philips-Lawrence was willing to try almost anything at that point.

On her visit she was careful to not reveal too much information. "After she looked into my eyes she made some notes than she asked me, 'How long have you been bleeding?' She knew so much about my health that I didn't tell her. She told me that something was wrong with the shape of my womb and I should do an ultrasound because that was beyond her area of expertise."

Lawrence was given some herbs and tea. "In two days of taking the tea, (the pain) stopped," said Lawrence.

Unfortunately, Philips- Lawrence's relief was short-lived. "I had taken up gardening and one night after gardening, I felt some pain in my back. By the next morning it was so excruciating that I thought maybe I had become pregnant and was having a miscarriage."

It was the weekend and she knew that she did not want to see a general practitioner. She wanted to visit a gynaecologist. A friend recommended Dr Lloyd Goldson, and first thing Monday morning she was sitting in his office. "I told him what I was going through and after he did a physical examination, he told me that I had a fibroid that was the size of a two-month-old baby. He said the pain I was feeling was the fibroid degenerating." Lawrence was immediately sent to do an ultrasound. "During the procedure I asked the technician how many she saw and she said she couldn't count."

The doctor told her that one option she has was to have a myomectomy (the surgical removal of fibroids from the uterus). "But I read that sugar feeds them (fibroids) so I thought, I am going to starve them. I cut sugar, flour and so many things out of my diet."

But at her next ultrasound exam the size of the fibroids hadn't changed. Lawrence told Outlook: "I had a fear that if I did the myomectomy, I would not be able to have children as I knew persons who had done it."

Ironically, Philips-Lawrence's condition made her stomach look as if she were pregnant. She would often have to deal with remarks from persons who assumed that she was She noted that some of the remarks were hurtful.

At her third ultrasound exam, her doctor's tone was different. "He said, 'Mrs Lawrence, the fibroids are squashing your kidneys.' He wanted to do surgery that week." Two weeks later she was in surgery.

Fifteen fibroids ranging in size from potatoes to limes were removed from Philips-Lawrence's uterus. "The first month there was no change in my cycle, neither the second month. I was wondering, what did I go through all of that for? By the fourth to fifth month, it was like heaven. I didn't know that I could use one pack of napkins for one month."

Despite her relief Philips-Lawrence did not think that she could have children. "I had resolved in my mind that I wasn't going to have children." Her doctor advised her that after six months she could try to get pregnant. Philips-Lawrence conceived in her seventh month. She told Outlook that she had a normal pregnancy and 18 months ago delivered a healthy baby boy through caesarian. Through it all, her husband was very supportive.

"My advice to women is, know what a normal period is and as soon as you suspect something is wrong, check it out. You don't have to suffer heavy periods, and excruciating pain is not normal. Get a second and third opinion," she said.