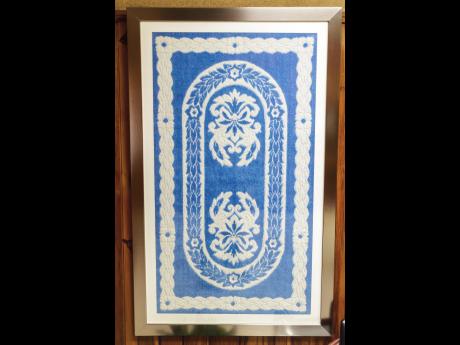 Gladstone Taylor
This towel in Graham’s office is a constant reminder of where he is coming from – the warehouse of Broadway Linen and Quilting Industries. 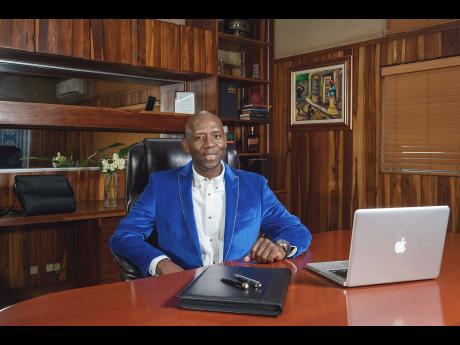 Gladstone Taylor
Hugh Graham now owns the office he was once not allowed into. 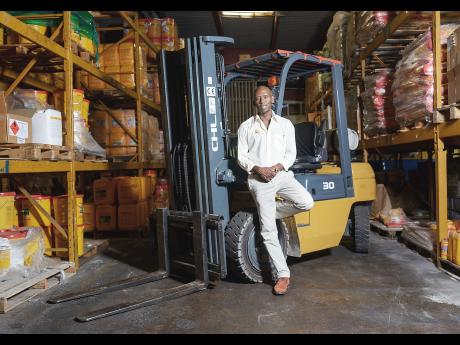 Gladstone Taylor
Graham is an advocate for making the best out of any situation. 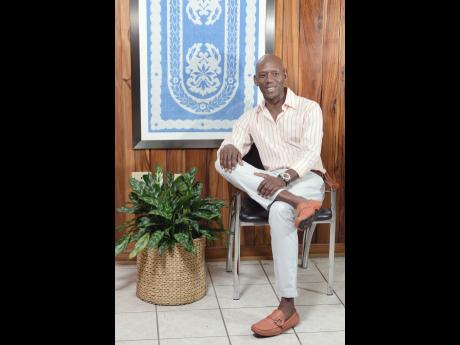 Hugh Graham has had an interesting life. His story begins in 1961, when he was born at the Victoria Jubilee Hospital in Kingston. At Whitehall Avenue, where he lived, he shared a small, two-bedroom house with his mother, Libnah Graham, a devout Christian, and his three siblings. His father, Rupert, a shoemaker, was not around. Graham said "he was a rummer" and frequented bars.

So, his mother was left to raise the family and provide for them on her own. "My mentor was my mother. I looked up to her while I watched how hard she worked as a helper; how devoted she was to her Christian faith and us children. I yearned for her work ethic. The best advice she gave me was to seek God. All the things I saw in my mother served as a guide for how I should live. What I saw in my father showed me how not to live," Graham told Outlook.

Graham remembers his first job as if it were yesterday. After graduating from Calabar High School and applying for an accounts clerk position he had seen advertised in The Sunday Gleaner, he went in for an interview, dressed in his starched shirt, perfectly knotted tie, and seamed dress pants. While waiting his turn for the interview, he was told by an assistant that the position had been filled by the applicant before him. Graham responded: "Well, I can't go home. I need a job. I need a job."

The assistant explained to him that the only available position was one he would not be interested in, that of warehouse attendant. Graham instantly said, "I'll take it!" With that, he removed his tie, placed it in his back pocket and began packing boxes that very day. So started his two-year stint with Broadway Linen and Quilting Industries, packing boxes of locally made sheets and towels. Today, one of those towels is framed and hangs in his executive office as a reminder of where he is coming from.

The owner of Broadway, George Morgan, was someone Graham looked up to. "Before meeting Mr Morgan, I never dreamt I could own my own business," said Graham. But as he watched this well-dressed, dapper and polished man run his own business, he thought, 'One day I want to be this man'. Graham pulled from Morgan's mannerisms, appearance and grasped what he could not learn from his own father. When he outgrew the position at Broadway he left the company, looking for more.

Taking a break from a traditional work environment, and while living in a boarding house in Ziadie Gardens, Graham subsidised his living expenses by working for the owners of the house. The Bakers allowed Graham to work for his stay. He learnt how to do odd jobs around the house, fixing appliances, lawnmowers, cooking and painting. The Bakers took him in like a surrogate grandson, because of his strong Christian principles and his unending work ethic. "The best advice Mr Baker gave me was when he said that he was 64 years old and he worked one job all his life. He said, 'Hugh, you need to stick to something'. That has never left me."

AF Pattingson Ltd were manufacturers' representatives, and working there was Graham's introduction to selling chemicals. He admitted that he initially did not enjoy working there, as it was hard selling chemical products. "I'm not sure how or why I continued, but I remembered what Mr Baker said - 'stick to something'."

"The owner, Alister Fitz Pattingson, hired me as a sales clerk trainee, but soon I became his driver. He took me to his sales calls where I learnt new sales tactics, and the word was getting around that I was a good salesman. I was being introduced to many business leaders and influential persons. One such building I drove him to is the very one where this interview is taking place. It is quite uncanny that an office I was not allowed into, reserved only for the department heads, is one that I now own."

May and Baker Ltd, a British chemical company, is where Graham sharpened his knowledge of the chemical industry. He received international training by experts through travelling to France, England, Chile and Brazil. This opened his eyes to the vast potential of the industry. Five years later, Graham and two friends started their own company - Paramount Trading. Paramount Trading, which celebrates its 25th anniversary this year, is the premier supplier of food and industrial chemical raw materials in Jamaica. The company distributes Sika Construction Products (concrete admixtures, waterproofing/moisture protection, floors and protective coating, sealants and elastic bonding, raw material chemicals, Allegheny Petroleum lubricants and oils).

Today, at various high school graduations and motivational talks to which he is invited, Graham's rags to riches story inspires young entrepreneurs to stick with something, like Mr Baker told him so many years ago. He is an advocate for making the best out of any situation; to surround yourself with people who are where you want to be; and to never forget where you are coming from. This he passes on to his four children - Jean Louis, Ana, Kiy and Joshua - for whom he ensures he provides the best guidance and a good education.

When asked to share his favourite quote, Graham responded, "It is not enough for me, but always enough to share."