Dear Doc | Is my man losing his nature? 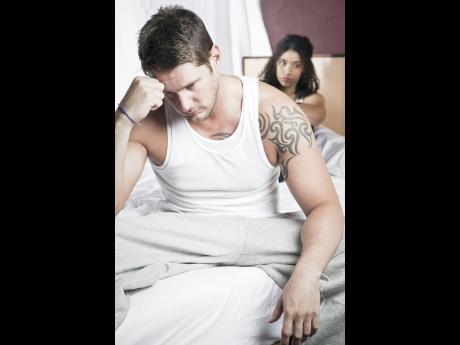 Q My boyfriend is having trouble getting and staying fully erect. We see each other a few times a month, and try to have sex about three times for the night.

The last time we saw each other, we started having sex immediately, but when we switched to his favourite position, he lost his erection. We tried again and again for the rest of the day, but he just could not get fully erect.

I felt like it was my fault because it had never happened before. Also, a few days before, we had a huge fight and we actually broke up, but then got back together the next morning.

Since then, he has not been able to manage. I'm worried, so I really need your help.

A Let's get one thing right - this is nobody's fault! Erectile dysfunction or ED (for that is what he has) isn't anybody's fault. It just happens, for a variety of different reasons.

What reasons? Well, it depends a lot on the man's age. You have not told me his age, but the fact that until recently you have been 'doing it' three times for the night, would suggest that you are both still relatively young - perhaps under 40.

Now in this under-40 age group, the most common cause of ED are psychological factors, such as nerves or depression. In this case, it may be no accident that his impotence started only a few days after you two had what you describe as 'a huge fight'. It is certainly possible that this big fuss made him nervous or anxious or depressed.

There are many other physical causes of ED, and these become more common as men gets older.

- Hardening of the arteries (atherosclerosis)

You can probably guess what I am going to say next. Your boyfriend urgently needs to be assessed by a doctor who can examine him and decide what is the likely cause of his present difficulties. When that has been done, the doctor may well prescribe some medication, which (I hope) will help him get back to normal. Good luck.

Fluttering sensation in the abdomen

Q Dear Doc, for the last two years I have been feeling a flutter in my belly. Sometimes it's like a baby moving inside of me - right where I got a C-section.

Is something wrong with me? I just don't like the feeling, so I am really concerned.

A A lot of persons get a fluttering sensation in the abdomen. These feelings are generally caused from one of two things:

- The passage of gas through the intestines.

It is unlikely that there is anything wrong with you. But just to reassure yourself, why don't you let a doctor check out your tummy? I am sure she will be able to tell you that all is well.

Are supplements to increase your penis size effective?

Q Doctor, I have a concern. I am 31 years old and married to a beautiful woman. We have a very active sex life.

But when my penis is flaccid, it seems very small. However, when it is erect, it's about six inches long. My question is, are the supplements that claim to increase penis size any good?

A No, they are a complete waste of time and money. But in any case, what you should realise is that if your length while erect is six inches, that is actually a little longer than average.

In the last few years, there have been new studies which show that the average guy is only around five and a half inches long, which is less than was previously thought. So you are fine.

The fact that you seem small when you are not erect does not matter at all. The important thing is that you are OK when you are 'in action.'

Is my boyfriend cheating?

Q Doc, I would like to know if my boyfriend is cheating on me when he is away from the house? I'm always home, so certainly he has the opportunity, Doc.

Our sex life is great, so there's no problem there. But I have noticed that whenever he gets a call, he moves far away from me to another room so that I can't hear the conversation, or he declines the call, and pretends that he is talking to someone else.

Also, I have noticed that all of a sudden his work pattern has changed. Recently, he has been taking a change of clothes with him to work. I don't know why. He is also coming home late, and he is always tired when he comes home.

So I can't help wondering if he is cheating with another woman. What do you think, Doc?

A Well, obviously I cannot tell for certain if he is cheating. But I can say that his recent change in behaviour does suggest that something is very different in his life!

In particular, I am concerned about the way that he takes his phone to another room when he gets a call. That is really quite hurtful to you.

I feel that you must speak to him about this. Please set aside some time to sit down and talk it over with him. Tell him that you want some answers as to why he has been behaving differently in recent weeks.

I am afraid that it is possible that your relationship is going to come to an end. Sadly, you must be prepared for that.

On the other hand, it is just possible that he is completely innocent. Let's hope so.

Q Doctor, please tell me if I am being petty. I am married with two young girls. Whenever the extended family overseas (the in-laws) are sending personal items for the family, such as clothes or shoes, I am left out. The presents are only sent for my husband and our girls. It feels bad to be left out!

I have spoken to my husband, but he is nonchalant about the whole thing. I think he believes I am overreacting. How do you think I should deal with this situation?

A This is a little outside of my field, but I do appreciate that you feel slighted by what you see as your in-laws' lack of interest in you.

This resentment is a warning sign! I have seen one or two cases in which difficulties between a wife and her in-laws have led to a break-up of the marriage. And I am sure you do not want that to happen to you.

So I suggest two things:

- Try very hard to ignore this. Reflect on the fact that in the greater scheme of things, it really does not matter.

- Improve relations between yourself and the overseas in-laws by regularly sending them little, inexpensive souvenirs of Jamaica - say a picture of Dunn's River Falls or of Blue Mountain Peak.

In this way, you could greatly improve communications and friendship between yourself and them.

Q Doc, which is safer - the Pill or the condom?

A: The Pill is safer in preventing pregnancy, provided you remember to take it! But unlike the condom, it does not prevent any sexually transmitted infections.