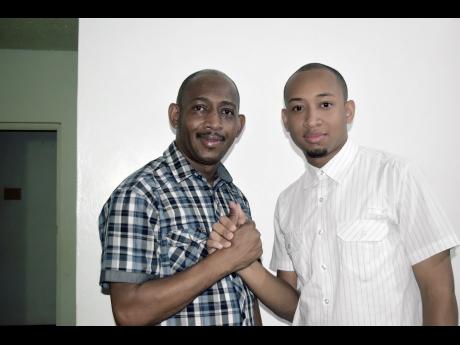 One cannot simply sit in a room straight-faced when the father-son duo of Jim and Jeovannie Patterson are present.

The two personify the term 'two peas in a pod', with their comical antics, love of the arts, special technical skills and leadership roles in and out of church.

From the very beginning, Jim, a very active father, took his responsibilities very seriously - even to the point of quitting his job.

"Outside of my wedding, the birth of my only son was the most exciting time in my life. I remember shortly before my wife gave birth, I was in a very good job at the time and I asked my boss for some time off. He told me I was too important to the company to take the time off and I resigned that same day."

Jim was present for all the events his son participated in at school. He never missed a parent-teacher meeting, and even became the president for a special parent-teacher association for fathers at his son's primary school.

They could be seen together at several football matches, as Jim was instrumental in developing and grooming teams.

Being around his father so much, it was really a no-brainier when 'Jeo', as he is affectionately called, influenced by his father's passion for graphic design, unearthed his own skills and passion in the same field.

Jim said he did not push his son into this path as he believes one must be allowed to explore his or her own passions.

However, he did recognise his son's love for art and design.

"Just like me back in the day, Jeo has drawn images in every notebook, on test paper, or any surface which allowed him to do so. I don't mean just scribblings, I mean properly done images that could be transferred to canvas," said Jim.

Jim, who graduated from the Edna Manley College of the Visual and Performing Arts, having completed his studies in graphic design in 1991, will proudly witness his son, this August, graduate from Northern Caribbean University with a bachelor's degree in computer information science.

"It was often assumed that I would end up in the sciences based on my aptitude for certain things. I started out as a biology major, but one day my parents asked me if this is something I wanted to do, and I realised it wasn't. I love computers, art and creativity," Jeovannie explained.

The two have worked on several projects together with Jim doing the graphics and Jeovannie handling web design, while freelancing for a top advertising company.

Jeovannie said that he has shared many special moments with his father, but one of the best memories was when his father bought him a BMX bicycle.

"There was a man in the community who would come to church with his bicycle - well chrome up and everything," said Jim. "Everybody would be distracted by the bicycle during the service, including my son. Before asking the guy if he was selling the bicycle, I asked my son if he wanted the bicycle. I offered the guy a money him couldn't refuse and got my son the bicycle for his birthday."

As he beamed with pride, Jim told Outlook why he is most proud to be a dad and what he hopes for his son.

"I choose God's way in all the things that I do, and in so doing, the values I think I can impart to my son, I consider to be my legacy I want him to emulate. I want to demonstrate the importance of family life. My wish for Jeo is that he will always covet the right things in the light of righteousness. Oh, and I want him to get a good wife."

Jeovannie said that he loves his father's tenacity and devotion.

"I love his unending persistence. I remember when mom was sick and he was right there at every step. He went above and beyond. His personality can sometimes be overwhelming, but if it wasn't for his personality, a lot of things would not get done. He is not afraid to fight for what he knows is right. I'm not someone who is easily impressed, but this is something I really admire," he said.