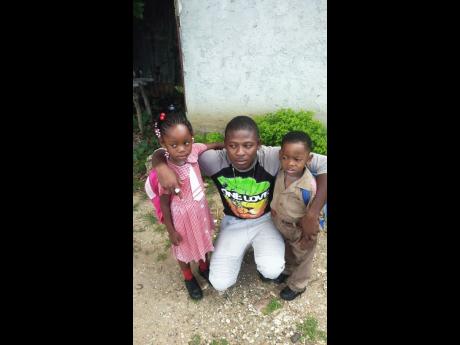 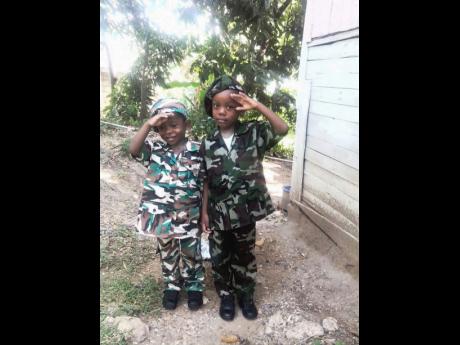 Contributed
It’s Career Day and his children seem to be taking on their father’s dream.
1
2

Twenty-two-year-old father of two, Oshane Angus, is giving his new role as a single father everything he's got, and then some.

There are things he acknowledges not knowing, but he isn't afraid to reach out to his mother and mentor, Kevin Edwards, for advice in dealing with his four-year-old daughter and three-year-old son.

Charged with the sole responsibility for their care two years ago, he admitted that there were times when he felt "overwhelmed", but it is during those times he calls on God for guidance and strength.

Having been in a relationship where they were at one point talking marriage, he didn't envision himself being a single father.

"My children's mother accepted Christ as her saviour and we were planning on getting married, but then misfortune struck," he shared with Outlook.

He said his barbershop was destroyed in a fire and during that time he also lost two family members. He described that period as a big setback. His fiancÈe left to go to the country and took the children. "When it was coming on to September when the school year would begin, I went to see her and took up the children," he said, adding that he thought she would be joining him shortly after.

That didn't happen, and in spite of his many phone calls, she didn't return to their home, leaving Angus to stare reality in the face - that he now had to soldier on and take full charge of his children.

"There are times I still wonder what I did to make the relationship fall apart, as I have never hit her, argued with her or anything. I thought we had a perfect thing, even now I still have love for her; but now it's all about allowing God to direct my relationship," he said.

Angus says there were many nights when he has to call his mother, seeking her advice on 'girlie stuff' and she would also come to assist him during the days. "I often pray to God and ask Him to help me to understand my children and to service their emotional needs," he said.

Although he is now mastering the task of meeting their daily needs such as preparing their meals, getting them ready for school, he is yet to master the art of combing his daughter's hair.

Smiling, he said, "I take her to the hairdresser for that."

Having taken on the sole responsibility for his children, Angus said he now has a greater appreciation for mothers.

"I want to big up mothers who go through all kinds of struggles and still be there for their children," he said.

Although he has come a long way now, he said he still has issues in carrying out his fatherly role. He said, as a father, he struggles with punishing them when he has to, without feeling guilty. "Although I don't hit them, denying them stuff to teach them a lesson pulls at my heart," he confessed.

Being the sole caregiver doesn't come without its challenges such as paying the bills, school fees and other financial obligations, but Angus is still thankful that God has enabled him to rebuild his barbershop.

Talking about what being a father means to him, he describes it as "an important mission with the rare opportunity to influence a life. It is an awesome responsibility and one not to be taken lightly. I may not have a lot, but I sure do have a lot of love to give," he said.

Between his job and being a father, Angus does not have a lot of free time on his hands, but in those rare down times, he says he spends it watching military movies and listening to music.

Looking ahead, Angus shared that his ultimate dream is to see his children grow up and be the best that they can be, and to fulfil his dream of being a soldier. "Since I was a child, I have always been inspired by the army and would dream about being a part of the Jamaica Defence Force. It would be a dream come true for me to make it in," he said.