Farewell to a Dear Doc 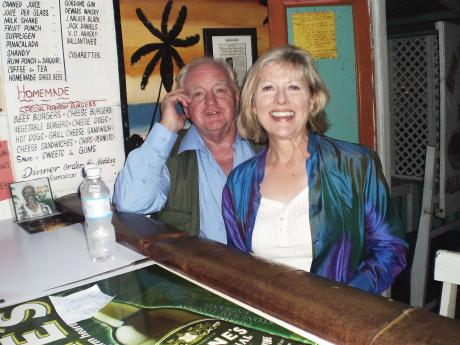 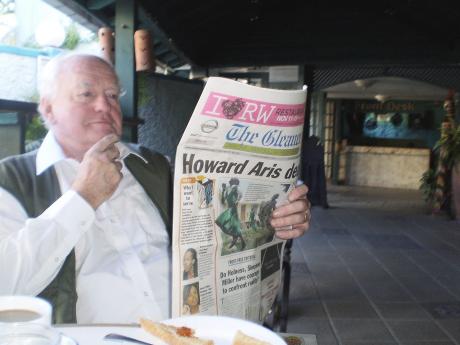 Contributed
Dr David Delvin reading a copy of The Gleaenr. 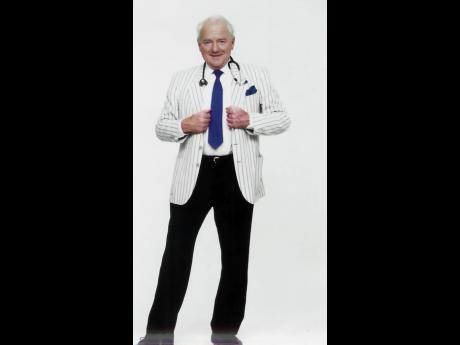 For 50 years he has faithfully provided thoughtful, compassionate answers to Gleaner readers' questions on sex, health and relationships. Most know him simply as 'Doc' behind the popular 'Dear Doc' columns, but his true identity is Dr David Delvin, a spirited Irish general practitioner specialising in gynaecology.

Doc will be retiring from writing his weekly columns in The Gleaner, so today as Outlook features his last column, we spend some time with Dr Delvin, who has an immense love for Jamaica and its people.

Delvin began writing for The Daily Gleaner back in 1967, but has always been fascinated with Jamaica and Jamaicans. He told Outlook, "When I was very small, my boyhood hero was the great Jamaican 400- and 800-metre runner, Arthur Wint. Wint was the ideal role model for me. He had been a flying officer in the Royal Air Force during the war, and he was training as a doctor at St Bartholomew's Hospital. I saw him win race after race in great style. And I'll never forget watching him take the 400 metres gold at London Olympics in 1948. So, I grew up pretty pro-Jamaican. When I started training as a doctor at King's College Hospital in London in the 1960s, we were located on the edge of Brixton. There were many Jamaican patients. I was charmed by their sense of fun, and their courage."

Growing up during World War II, Delvin spent his childhood in Ireland, Scotland and England - constantly moving around because of the bombings. The things he saw were what motivated him to become a doctor. "As a child, I encountered a lot of very sick people (those were still the days of tuberculosis, etc). It seemed a good idea to try and help them."

After completing his medical studies, Delvin's dream of visiting Jamaica finally came true. "After qualifying, I spent some years acquiring medical experience and postgraduate diplomas. But you can imagine that I was absolutely delighted when the British Ministry of Overseas Development sent me out to Jamaica on a long contract!" he said.

He spent three years working on the island, first at the Victoria Jubilee Hospital, then as a medical registrar at the Kingston Public Hospital. "I had a truly wonderful time in Jamaica and [as I expected] loved the people. I met some great Jamaicans, including Dr Arthur Wint himself, Sir Alexander Bustamante, and Theodore Sealy, the famous editor-in-chief of The Gleaner. I used to read The Gleaner every day, and thought it was fabulous!"

In the summer of 1967, Sealy asked Delvin to write a weekly column for The Daily Gleaner. "I don't think that some of my early columns were very interesting. I particularly remember one which was headlined 'Mumps can be on one side only'. I doubt if that attracted many people."

But, to his surprise, readers began sending in letters with various medical questions. "A lot of these [letters] were about 'below the belt' medicine. This was because people found it difficult to get that kind of information. This was so all over the world," said Delvin.

Delvin was very dedicated to his job as a columnist, always doing whatever it took to make sure he got in his column on time. "There were several times when I borrowed the typewriter of a hotel's receptionist to do my copy and then mailed it in from Montego Bay or wherever, to Mrs Hilma Brown at The Gleaner, by ordinary post. This just went on and on. I continued writing (and sending the copy in by post) week after week, whether I was in Jamaica or elsewhere in the world. In the 1970s, Hector Wynter (who was then editor-in-chief) asked me to put 'a little more sex' into the column. This suited me fine, as in London I was studying various aspects of sexology, like contraception, venereology and what we then called marital problems," said Delvin.

"In recent years, the current editor-in-chief, Garfield Grandison, honoured me by asking me to expand to two columns per week - one on Saturday to help teenagers and young people, and one on Sunday for adults."

Helping young people has always been very important to Delvin. As he reflects on half a century of Dear Doc, he hopes he has been able to help them. "I hope that I have been able to help some young people. I still remember how difficult it was to be a teenager, with all the worries we had about love and sex. So, for me, an important objective was to help youngsters to avoid the dangers of unwanted pregnancy and infection, and to try and show them how to cope with things like unrequited love."

Over the years, Delvin has received some very unusual letters. "In my early days, I got a letter from a guy who was worried that he might have 'a romantic heart'. I eventually realised that he meant a rheumatic heart. I have also received a lot of letters/emails from men and women who claimed to have had very large numbers of orgasms, and wondered whether this could do them any harm."

At 78 years old, Delvin, having retired from practising medicine, is retiring his beloved column as well. "Obviously, I wanted to bring a smile to the lips of readers. But, a lot of the time, it was all about clearing up simple health misunderstandings, often concerning contraception and VD (venereal diseases). I will miss it greatly," he said.