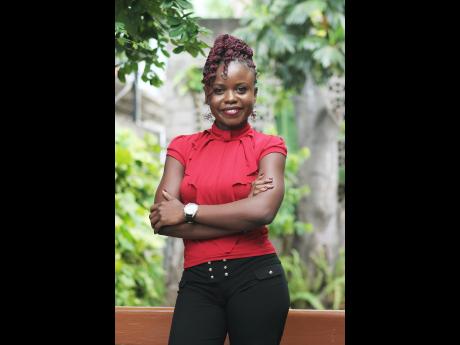 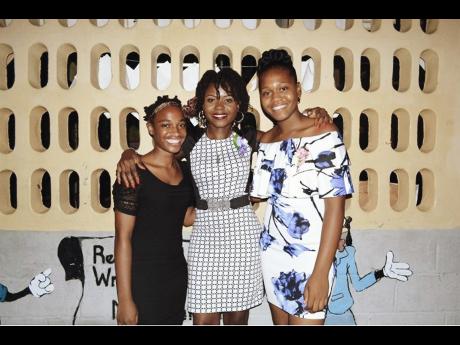 Contributed
Walters (centre) with her top Amazing Prospects students from 2012 - Keleen Bailey (right) and Sherone Gardener both of whom earned places at Glenmuir High School and Clarendon College, respectively. 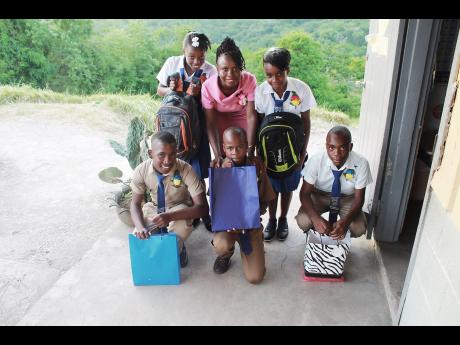 ​Children need a little nudge and motivation so that they can find the right direction in life. No one understands this more than 30-year-old Kimesha Walters, who has made it her mission to change and enhance the lives of the future generation - one child at a time.

The fun-loving public relations practitioner believes that random acts of kindness can create a ripple effect on individuals and the universe.

"I always knew I wanted to do something that I enjoy and that would make me feel accomplished. I didn't have a clear-cut vision as to what that would be, but over time, with help from my family, and my mentors, I realised that I loved writing, hearing, and retelling people's stories and impacting people in a positive way," Walters told Outlook.

Fresh out of university in 2009, Walters saw a lack of development and growth in her community of Prospect, Clarendon, and wanted to provide upliftment to the place that laid a solid foundation for her life.

Deciding to start a past students' association at Prospect Primary, Walters planned on rallying other past students to respond to the needs of students and produce an avenue for networking. However, with little support, Walters decided to focus on achieving her goals with minimum input from others.

In 2010, when Walters was asked to be the guest speaker at the Prospect Primary School graduation, the idea of bringing a gift for the school instantly popped into her head. She asked about their needs and bought a set of textbooks out of her salary to help the children prepare for the Grade Four Literacy Test. This only enhanced Walters' desires as the following year, she helped the Grade Six Achievement Test (GSAT) students, and breathed life into the 'Amazing Prospects' initiative.

"My passion developed from a series of events that made me realise the power of inspiration, and the endless possibilities when you dare to dream. When you have a sense of purpose and someone who believes in you, you're more inclined to set a standard of excellence," Walters said.

After making the donation to the school in 2010, Walters saw the instrumental role the prize-giving ceremony played in creating a route of excellence and decided to use it to inspire the next generation. It didn't take much for her to finalise her ideas and, using her salary, she purchased backpacks, stationery, and other school supplies to help make a difference.

Over time, she has sought assistance from friends and past students, some of whom have consistently helped to fund the initiative. From the outset, she wanted to make sure that the gifts were useful, and in the long run, help the students find success.

"When my Amazing Prospects step into their new classroom in September, they will have a tangible reminder that they can persevere and excel and that determination and diligence leads to long-term rewards," she said.

In seven years, Amazing Prospects has aided more than 20 GSAT students and countless others who have benefited from resources purchased for the Grade Four Literacy test.

Last September, at the start of the academic year, Walters made a promise to reward the top student with a $10,000 book voucher, and was elated to have the support of her friends, fellow past students, and well-wishers such as Charles Chocolates, who have added to the work of Amazing Prospects.

The accounts executive of CGR Communications, ultimately aims to have a scholarship that provides financial assistance to one top student per year, giving them a generous financial boost for the start of their secondary education.