Trevor E.S. Smith | The 'I' in Trump sheds light 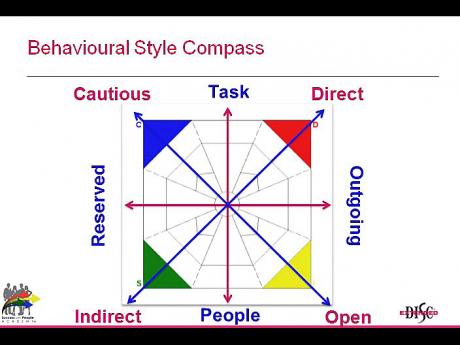 As an advocate of DISCerning communication principles, Donald Trump is an intriguing case study. On the surface, we see dominance.

On deeper analysis, another factor is at play that explains a lot about his behaviour. While Trump's is unrestrained in the use of dominance, that overshadows a strong liking for the use of inducement (influence).

It might be fair to say that Trump actually uses his dominance to protect his indulgence in the use of influence.

Note: Unrestrained use of any style can produce negative outcomes.

Ways in which Trump has used his 'D' to live out his 'I'.

His presidential campaign was a classic example of someone who wants freedom from rules and structure, and has the capacity to use dominance to make it happen. The protection of his compulsive tweeting and refusal to curb off-the-cuff remarks are other telltale manifestations of unrestrained use of the DI behavioural style.

A powerful, unrestrained DI behavioural preference can be polarising. How could such an individual be guided to get better results?

Key #1: Start with the big picture and make it even bigger

Show how by subjecting to discipline, order and structure, they get to play on an even bigger stage with more opportunities to express themselves. That is a strategy Kellyanne Conway would have used to bring things like the teleprompter into play in the latter stages of Trump's presidential campaign.

This is very tricky because while widespread approval is valued, the opinion of 'people who matter' to the individual is more important. Think 'select opinion', not 'public opinion'.

In order to change the behaviour of a powerful, unrestrained individual with a preference for the DI-style of behaviour, you have to change the messages that are being sent by those who truly have their ears and have earned their respect.

One criterion for identifying such individuals is to look for people who can help the person to achieve their objectives. Success is the only language that is understood.

Show strength by drawing a line in the sand and refusing to cross it. The potential loss of trusted support and valued approval can force the individual to reconsider their actions. Again, the key to transformation is through their inner circle and those that matter to them. Anything else is just noise.

Key #4: Start at the fringes

Ambitious plans designed to achieve significant change are doomed to fail. Work at effecting change in areas that do not impact firmly held views, and which are out of the spotlight. Also, make it easy and comfortable for the adjustment to be adopted. The objective is to stack up mini-victories as evidence that adjustment is easy and can produce valuable results.

Key #5: Give them ownership of the idea

Carefully plant seeds related to the desired change in such a way that the individual has an Aha! moment. Quickly support their idea and roll out its implementation. The easiest route to buy-in is to relocate the source of the idea.

Shaming is risky because using embarrassment to drive change could prompt stubborn resistance. Shaming only works if it embraces enough people who matter. Their approval is what counts. Muting that encouragement is the path to transformation.