Melarka Williams : A man who stops at nothing 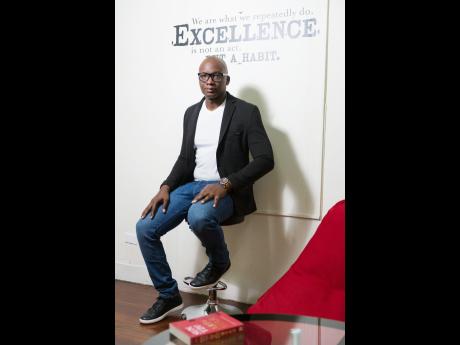 Gladstone Taylor
When Williams was made redundant at 29, he decided to take a chance and invest in himself. 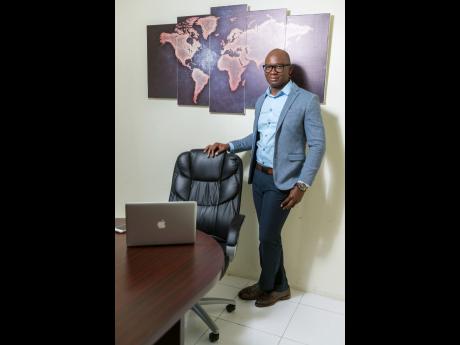 You can tell a lot about someone by what makes them come alive. Melarka Williams lights up when he talks about science, technology, his five-year-old daughter and his beloved Chelsea Football Club.

With his six-foot stature, shaved head and glasses, Williams' appearance commands attention, because, simply put - he just looks smart. When you sit and talk with him, you realise his easygoing nature and ability to engage in an in-depth conversation comes from his genuine interests, and his brilliance is no longer daunting. Williams lives up to the meaning of 'Melarka' a name his father Clifton gave him some 35 years ago when he was born in Linstead, St Catherine. It means kind and gentle. This electrical engineer turned tech-founder sports an edgy, preppy style and has garnered the respect of his peers and fellow industry leaders. Today, we take a look into the life of this multifaceted entrepreneur.

Meticulous regarding every decision in his life, Williams is the consummate overachiever who learnt early in life the simple formula of working hard to get what you want. Williams observed his hard-working parents, both factory workers in different food manufacturing industries. His mother, Enid Nelson, worked in the fields picking bananas, oranges and other citrus either to be packaged for export or for manufacturing. After working in the fields, she would return home to prepare hearty meals for the family of seven. Williams told Outlook: "There really is no cooking like your mother's."

He continued: "I remember the maternal love my siblings and I received from our mother. She was a gentle soul, always pleasant, and didn't let anything trouble her. While my mother worked a steady nine-to-five shift, my father had alternating shifts at the factory. My father knew only one job all his life. He began working at NestlÈ at age 18 as a labourer in the processing department on the production line; and he worked there until he retired. This taught me the importance of stability."

Williams expressed gratitude to NestlÈ as they provided him with scholarships for his entire academic life, which subsidised school expenses. Through the company's summer job programmes, Williams also worked at the plant alongside his father. "These summer internships were some of the most rewarding experiences of my life. Seeing how the machines worked sparked a joy in me, and, no doubt, this lead to my love for mechanical engineering."

"My cousin, Roystan Powell, was my first mentor. Being older than I was and already a certified engineer, he made the career seem relatable and fun, and he encouraged me to get into the field. We both loved maths, physics and sports, and this was what connected us and taught me the importance of balance and enjoying what you do. Roystan has been a constant throughout my career, and I suppose he showed me, first-hand, the importance of mentoring to achieve and exceed life's goals and aspirations."

It was at high school - St Mary's College - where Williams' love affair with technology began. "They had an impressive IT department, ahead of their times in many respect, due to the international teachers who ensured that the department was above average." Williams' academic excellence and his innate likability contributed to him being elected deputy head boy in his final year of high school. When Williams attended sixth form at Calabar High School, he was the top-performing science student and an active member of the debating team.

During his tenure at the University of Technology (UTech) School of Engineering, Williams found his familiar place at the top of his class. However, it was at UTech that he learnt the true value of networking. At the Careers and Placement Department, he formed strong friendships with the department heads, and even today these friendships stand.

A career with Ericsson International, a market leader in telecoms equipment, is where he would build a reputation for excellence within the Fortune 500 company. "The knowledge I gained from working at Ericsson was immeasurable. I got extensive international training, and I learnt the importance of having systems and processes in place, and to be self-motivated. I was happy at Ericsson." But the company was going through some changes and his post was made redundant when he was 29 years old.

"Admittedly, I was shocked because I was good at my job. I was constantly being told that I was good. I played by the rules, I put in the hard work, but like so many before me who were faced with redundancy, I realised that my future was dependent on my next move," he told Outlook. "When I received my redundancy package and realised I had US$40,000 to work with, I could easily have bought a house, which sometimes is the goal of many. But, instead, I had to make the decision to invest in a business. So I looked at this redundancy as the chance to take a bet on myself; and with all the training I had received coupled with self-teaching, I launched Ingenuity Technologies.

When Williams started the company five years ago, his vision was clear. Having worked for Fortune 500 companies, he wanted to start a company where he would be the employer of choice in Jamaica, specifically for the best and brightest minds. He noticed that after finishing school, graduates usually seek employment overseas. He wanted to build a company with a corporate culture where the best and the brightest minds are properly compensated, where they were respected and are treated not as disposable, but indispensable.

"Today, the company is growing and I am very grateful for the team which I have - they are very supportive of the vision of Ingenuity. I want to continue on that path. I want to encourage every young Jamaican interested in a start-up business that the underlying currency must be country first." Williams, a patriarch at heart, aligns with the mantra of Sir Richard Branson's triple bottom line of people, planet and profits. People come first, planet, and then the profits will follow.

His 2030 vision stems from his drive to contribute to a Jamaica where his daughter can see a country where hard work is adequately compensated. His goal is to make brand Ingenuity a regional powerhouse for software deployment, which automatically raises the reputation of Caribbean technology.

Williams lives by a few rules

- In this modern, advanced, smart world, good is just not good enough - the new norm is to be outstandingly smart and hard-working.

- It's not enough to just have a degree; the drive must always be to keep learning.

- Utilise networking opportunities. Your network is your net worth.

- You can't get to the top accidentally. You must put in the work.

- Surround yourself with friends who challenge you to go above average and to be the best you can be.

- If you are the smartest person in the room, you need new friends.

- When you don't close a sale, open a relationship.

- You need stability in your personal life, the core constant. When the world is changing around you, you need this to remain focused.

- Don't limit yourself to a job description.

- Build your business in stages; know your numbers.

- You can learn from anyone.

- Read extensively to train your mind.

- Who Moved My Cheese? by Spencer Johnson

- The Effective Executive by Peter Drucker

- No Woman No Cry by Bob Marley

- It's Not An Easy Road by Buju Banton

Founder and CEO of Ingenuity Technologies, Williams sits on various IT boards and was awarded by the Development Bank of Jamaica for his innovation in the creation of a mobile survey and business analytics tool. Williams enjoys weight training, jogging, football, basketball and going to the beach with family and friends on the western end of the island.