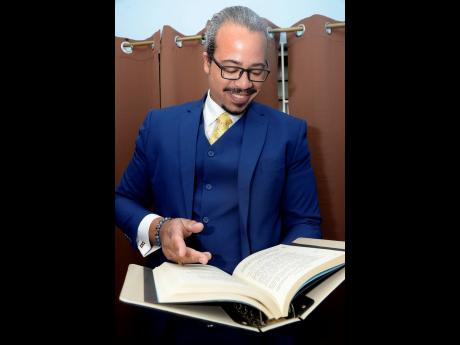 Lionel Rookwood
Attorney-at-law Ryan Hamilton engages in some light reading in his office. 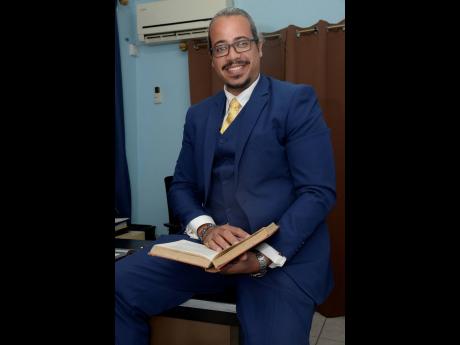 Donning his waistcoat, tabs and a briefcase, a sharp-looking lawyer makes his timely way to work. They say first impressions last a lifetime, and for attorney-at-law Ryan Jon-Paul Hamilton, seeing his dad head off into action daily, moved him to follow in his father’s footsteps.

“Law is something that I have always had the desire to pursue. However, as I grew, so did my interests. There were so many things that I wanted to attempt and accomplish, that I ended up taking a more circuitous route to law. To be able to objectively examine both sides of a situation and come to a reasoned conclusion, is an approach that I think is essential,” Hamilton told Outlook in a recent interview.

After attending Wolmer’s Boys’ High School up to lower six, Hamilton transferred to Ardenne High School to complete his high-school studies. At The University of the West Indies (UWI), Mona campus, his scholastic sojourn led him to attain his first degree in management studies. Armed with qualification, this businessman got hands-on experience for five years in the financial industry, before realising that his future was in the business of law. He contemplated this fate, but upon acceptance at UWI, he decided to leave his nine-to-five and commenced his studies full-time: there was no room for failure.

“Thanks to a farming endeavour, family, and many little projects – some were a hit, others a miss – I received my Bachelors of Law from UWI and my Continuing Legal Education from Norman Manley Law School.”

Now splitting time between criminal and civil law, Hamilton has opened his very own practice; a brilliant feat for the young entrepreneur. According to him, while both divisions of law have their nuances, civil law demands precision, while criminal law allows for flexibility.

“A civil action can fail for reasons that are not even related to the content of the action; for example, if timelines are not adhered to. It is very rigid. Then you look at a criminal matter, where the prosecution must outline their case before a defence is put forward. Depending on the quality of the case made out by the prosecution, a defence attorney’s focus may shift, doors that were previously closed may open; that is, new information may come to light. It is very fluid,” he says.

Practising in these two areas, he shared, encourages him to cultivate patience, analytical thinking, adaptability and a host of other required skill sets. “You always hear that the study of law is difficult and requires a significant commitment: they were not lying. I believe that I had an advantage as I had completed a first degree and gained work experience prior to studying law, so by the time I sat in the Aubrey Fraser Lecture Theatre, I had a level of maturity and commitment that I do not think I would have benefited from had I gone directly to law after high school.”

So what does he enjoy the most about being a lawyer? Achieving vindication for a client: an act he declares, which goes beyond being found not guilty. This is the instance where, he highlights, it is patently obvious that this person should never have even been accused. “Many times, stigma attaches itself to individuals, regardless of the verdict, which is a punishment in and of itself. We say, ‘If a nuh suh, a nearly suh’, but sometimes ‘nutten nuh go suh’,” he pointed out.

As for the business of running his law firm, he asserts that it is a lot of work because it can oftentimes disrupt the actual practice. But he remains blessed with a great team and the guidance of one of the best attorneys in Jamaica, his father Earl Hamilton, “It’s a good thing his advice is free, because I couldn’t afford to pay him,” he said with a laugh.

Hamilton also expressed gratitude to his family for being his constant source of inspiration and motivation. Describing his unit as incredibly supportive, he is appreciative of having parents who are exemplary, hard-working entrepreneurs, and a wife who is so driven that she makes that trait contagious.

The local judicial system is not without its faults, and if Hamilton had the power to improve anything, he would seek the resources and human capital to reduce the time it takes to complete the administrative processes, “That way matters could be heard and disposed of in a swifter manner, reducing backlog and benefiting all stakeholders to legal proceedings.”

As he continues to contribute positively to the legal system, his hope is that the quality of law provided in the country will improve in a way that benefits everyone. He will also maintain the provision of excellent legal service to his clients.

“If I accomplish this, I will be satisfied with my contribution to the legal fraternity,” he says.

Outside of the business, the lawyer still dabbles in farming, adores all genres of music, and is a certified dog lover. His advice to budding or aspiring ‘lawtrepreneurs’ is to approach the pursuit from a business perspective.

“You are the manager and the talent, so clear distinctions have to be made between those roles. You cannot sacrifice the quality on either, because you have two simultaneous duties. Above all, to your clients, as you have to consider the stakes in legal matters; people have to live with the outcome. At the same time, you have to be cognisant of the responsibility owed to the practice. This includes assessing matters as they progress, prioritising, networking, handling logistics and more. Ensure that you have an excellent team to advise and support you.”