Lorna Gooden: A leader with heart 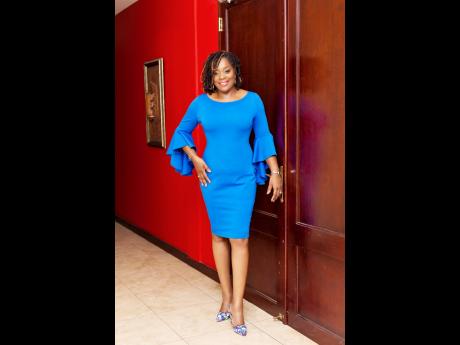 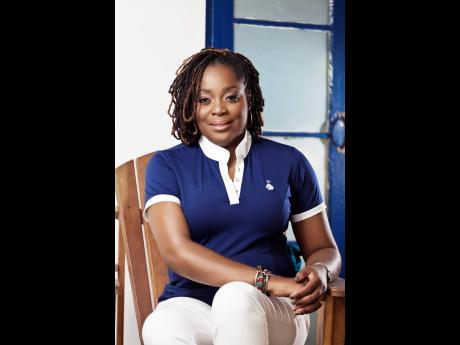 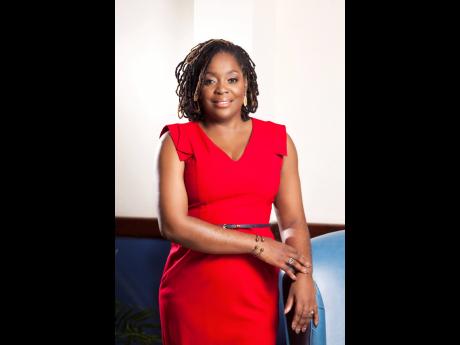 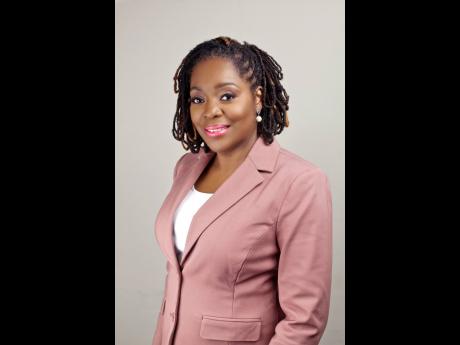 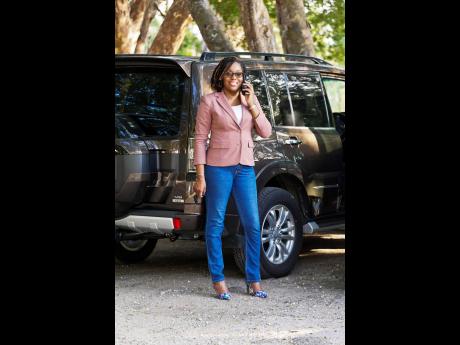 Lorna Gooden is best described as a living, breathing paradox. Both her persona and life story is filled with delightful contradictions – factors that in theory do not combine, but, in reality, meld seamlessly together to create a truly admirable and amazing leader.

She is a ‘country girl’ from humble beginnings, yet her reputation for excellence is well known in the executive offices of Jamaica’s most successful companies. She rocks sparkly nails and chic high heels, as she effortlessly commands the attention of any room of men in corporate Jamaica. In the boardroom, she is formidable, and yet she wears her heart on her sleeve. Professionally, she is known for being tough, fearless and extremely driven, but that unrelenting drive is underpinned by an incomparable kindness, empathy and a deep maternal instinct.

When Gooden retells the story of her coming into the world, it is with such passion and clarity that one would think she remembered the ordeal.

“I was born on a rainy night, at home. My father got lost going to find the midwife, leaving my mother with my great-grandmother. She was only 19, in the country. There was no light, because we didn’t get electricity until I was 13. So I came by candlelight.”

This fascinating story of her mother, Joan Scarlett Gooden, and great-grandmother holding down the fort while her father, Barrington, wandered about, lost in a storm, is most fitting for a woman who attributes much of her success to the inspiration of strong women, particularly her mother.

For many, her humble beginnings as a young tomboy from rural Hanover pale in comparison to the illustrious career she has built as a thought leader on corporate governance and compliance within Jamaica’s private sector. However, Gooden has never forgotten where she came from and embraces her past as a key contributor to the individual she has become, both personally and professionally.

Now, as she prepares to take on the biggest challenge of her career, stewardship of Supreme Ventures Racing and Entertainment Limited (SVREL), Gooden embraces the opportunity to leave a legacy of excellence, characterised by her very unique brand of leadership – firm, yet sincere and warm-hearted.

Ask anyone who knows her and they will tell you that Gooden’s most readily recognisable trait is her propensity to give of herself. It is therefore not surprising that as a child, despite her academic talents, her first aspiration was to become a paediatric nurse.

“I cannot quite explain why, but from an early age I had a strong urge to help and nurture others. I had an innate love for children.”

She discarded this dream, however, after her first trip to the hospital gave her a rude awakening about what the job truly entailed. She then set her sights on becoming a teacher, following in the footsteps of her mother, who taught at Lethe All-Age School. Even as a child, she would sometimes accompany her mother to classes, assisting in any way possible.

Gooden’s mother, whom she recognises as her best friend and greatest inspiration, was a philanthropist by nature and she learned how to be open and caring towards others by observing her.

“Growing up, it didn’t occur to me that my family was better off financially than the other families in the community. However, as a child, I can clearly remember my mother opening up our house to our neighbours and helping in any way possible. Sometimes it was food, other times clothes.”

Her mother also pioneered a breakfast programme for the less fortunate children at her school and convinced the Government to provide relief to those needy students following a particularly devastating period of flooding.

Even now, Gooden has not strayed from the example set by Joan Gooden. Although not a mother herself, she maintains a deep love for children and volunteers her time and affection through Optimist International.

Gooden’s academic talents and deep desire to learn became apparent at a very young age. As a result, her summertime adventures – hunting crayfish and playing with her peers – were interspersed with literary forays into the Merchant of Venice, Great Expectations, the Hardy Boys and even a bit of Mills and Boon. As a student at Corinaldi Primary and Mount Alvernia High, she excelled while still finding time to partake in extra-curricular activities like drama, netball, and track and field. As she fondly remembers her schooldays, however, she noted, “I didn’t like that Alvernia separated students into classes based on their academic performance. I was in the so-called ‘bright class’, but I didn’t like being segregated. I believed we should have all been allowed to mix in class, regardless of academic performance.”

Surprisingly, despite her father being an accountant, Gooden actually showed no real interest in the field until one very dynamic young teacher at Alvernia piqued her interest in the subject.

CHARTING HER OWN JOURNEY

Gooden considers herself a quiet rebel, never following the path that others expect her to, but rather, doing what feels right to her. After graduating from high school, she went on to complete a year at the Montego Bay Community College, where she truly fell in love with numbers and accounting. At age 17, after responding to a newspaper ad from Victoria Mutual for bank tellers, she was hired with just one interview. It was there that Gooden realised that she had an innate talent for accounting and got her first real taste of leadership.

“Before I even completed my probation period, a customer threatened me one day. I remember feeling an overwhelming need to do something about the situation, and shortly thereafter I became the union delegate.”

She would continue to chart her own path when she left Victoria Mutual and, after college, joined Deloitte & Touche, despite being encouraged to go with a larger competitor. Here she spent six years, rising through the ranks from semi-senior accountant to qualified senior accountant, before eventually leaving and ultimately joining the Supreme Ventures Group.

Gooden’s streak of self-determination is just as present in her personal life. Over the years, she has endeavoured to create an existence that best serves her personal needs in all aspects of her life, be it spirituality, romantic relationships, or otherwise. Like many other women performing at the highest levels of their profession, she is unmarried. While this is often considered by many to be ‘the price women pay for success’, it does not limit Gooden, nor does she let it define who she is.

Gooden is very open and accepting about her reproductive health challenges – “I have gone through a lot in my life, including serious illness which eventually led to infertility”.

Over a decade ago, Gooden underwent a procedure to treat her endometriosis, a condition associated with severe pelvic pain. The procedure, which was botched, led to a series of complications which eventually left her unable to get pregnant. This, though, did not stop her from sharing her naturally nurturing instincts and she has come to represent a mother figure for many.

Instead of living with regret, Gooden has learned to find happiness in herself, and, despite the countless tears shed, she has been able to focus on the positives in life.

“After two failed rounds of IVF treatment, it became obvious that I was not going to have children. It was at first very painful, but since, I have learned to truly accept and love myself.”

Instead of letting these challenges get the best of her, Gooden has used her experience as the basis from which to encourage other women to believe in themselves and their ability to persevere.

She also draws strength from other women who have embodied a similar sense of independence, like former Prime Minister Portia Simpson Miller. In addition to their physical similarities, Gooden saw in Simpson Miller a shared aspiration to achieve the seemingly achievable; to break through the glass ceiling in a world dominated by men.

“Portia Simpson Miller was the first woman I saw on television who I could really identify with. She made me dare to dream.”

A STUDENT OF LIFE

Although seemingly at the pinnacle of her career, Gooden makes a concerted effort to never stop educating herself. For her, continued learning in or outside the classroom is the real key to success, and she lives by what she preaches.

Despite her many professional accreditations, Gooden is currently pursuing an LLB at the University of Technology. She actively urges those looking to move up in their respective organisations to do the same.

“A mentor of mine, Brian George, once said to me that every day on the job, you’re actually interviewing for your next position. I, therefore, encourage people to find their niche in their organisation, try to learn as much as possible about that position, and gain executive buy-in on how your acquired knowledge can help to build the company.”

Gooden also fondly noted that some of her most cherished lessons have been gained not in the office or classroom, but on her travels around the world.

“I love to travel, see new places and learn about the history of the country and its people,” says Gooden, who particularly values her visit to South Africa, where she visited the former cell of Nelson Mandela.

Lorna Gooden’s current professional journey began 18 years ago with her association with the Supreme Ventures Group (SVG). First starting as financial manager, Gooden’s innate abilities and impeccable work ethic became undeniable as she rose through the ranks – moving to financial controller, assistant vice-president for group finance, and eventually in the role of corporate secretary.

The same enthusiasm and willingness to take initiative that made her stand out as a young teller at Victoria Mutual, drove her to become one of the most respected voices in corporate governance within Jamaica.

She is credited with developing and expanding Supreme Ventures’ award-winning corporate governance framework. Gooden is also the driving force behind SVG’s exemplary record of compliance with statutory and JSE timelines.

On May 1, Gooden officially assumed duties as the general manager (GM) for SVREL. She will be stepping into an industry that is not only new to her but furthermore, very male-dominated. She is not daunted by this challenge. As GM, she will also be faced with the hurdle of reversing a history of loss-making in an entity that was previously government-operated. This too doesn’t faze her.

Every experience she has had, both positive and negative, helped to prepare Gooden for this next chapter in her life and she is fully prepared to both impart knowledge and to learn.

When she ascends to the leadership of SVREL, she will be bringing not only her strength, expertise and tenacity, but also her humanity and endless compassion. It’s this unique combination of characteristics that will make her an unforgettable leader.