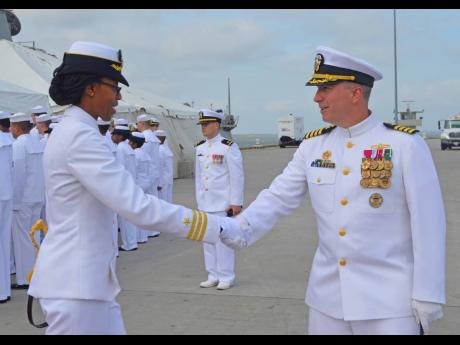 CREATING HISTORY seems to be a part of the normal routine for Jamaica-born navy captain Janice Smith.

She recently added another laurel to her already-illustrious career when she took over leadership of the Military Sealift Command Atlantic (MSCLANT). Smith became the first woman of African descent to command MSCLANT.

A change-of-command ceremony was held at Naval Station in Norfolk, Virginia, USA, outside MSC’s headquarters on March 19.

Smith has achieved a number of firsts in her career: the first Jamaica-born to command a US Navy destroyer, first woman commander of USS Oscar Austin, and the second woman of African descent to be a commanding officer in the United States Navy.

She is also one of only two active duty African American women in the US Navy Surface Warfare Community that is screened for major command.

Before assuming command of MSCLANT, Smith served on the staff of Carrier Strike Group Five, embarked on the forward-deployed USS Ronald Reagan (CVN-76) conducting operations in the 7th Fleet Area of Responsibility, to include two deployments to the Western Pacific.

She was enlisted in the navy in 1988. She served aboard the USS Yosemite from 1989-1993 and at NAS Keywest from 1993-1997. She graduated from Troy State University with a masters in business management and was commissioned through the Officer Candidate School programme in 1997.

Travelling across the globe, Smith said, has also given her a fresh perspective on life.

“Travel made me patience and tolerant, it has allowed me to put myself in someone else’s shoes,” Smith said. “It has helped to open my horizons, kind of see the world perspective, and this is what counts.”

Smith remembers, like it was yesterday, helping her grandmother to harvest produce on their farm in the rural district of Bog Walk in St Catherine, and loading them on donkeys. From growing up in a sheltered rural environment, charting the course of her career to exploring newer horizons, Smith has come a long way.

She attributes her upbringing for making her the grounded and resilient woman she is today.

It has helped her to understand the ‘ground realities’, she said, of being objective and keeping a level head.

“There is no task more important than the well-being and safety of the sailors. The real challenges lie ahead, the responsibility of the lives of over 300 sailors,” she said. “My actions or inactions impact not only them, but their families.

“I have a responsibility,” she said. “I have to bring everyone home safely.”

Smith said handling the day-to-day affairs aboard the destroyer-class vessel, being a leader, motivator and a shoulder to her subordinates, has deep-rooted bearings to her grandmother.

“My grandmother, Iris Plummer, taught me that no job was menial, and imbibed the values of integrity and honesty in me,” Smith said.

Though she helped her grandmother on the farm, she was encouraged to go to school, earn a degree, and carve a life for herself.

“She wanted to shield me from that kind of life (that of being restricted to farming and living in a small space), and helped me focus on bigger dreams.”

Smith said she is living her dreams every day, in every step of the way, and if she feels like it is slowing down, she turns to her roots.

She informed that she travels to Jamaica once or twice a year to make a spiritual connection with the land of her birth.

“There is something about Jamaica,” said Smith, “… something quite unexplainable out there … it kinda makes me calm, and keeps me in perspective.”

And, she said, whatever she does comes with an impeccable and strong support mechanism – her family.

Married to Julius Lyles, the couple has two sons, Alexander and Xavier, who are the core of her being; and her extended family – mother, aunt and brothers. “I am grateful to my mom Gloria, who created these opportunities, and my Aunty B, who continues to guide me,” Smith said.

“Family is important, you have to support each other. Everyone has contributed in my life and instilled their values. I have four brothers who support me wholeheartedly. They would drop everything that they are doing and be by my side when I need them,” Smith said.

In her travels, Smith said, she misses the Jamaican sunshine and the taste and aroma of the country-cooked food.

“I haven’t got used to the cold,” she said. “And I miss ackee and salt fish, yam and boiled bananas. I do get an opportunity to cook, but it’s the canned variety (ackee), that’s how close I can get to the original.”

Books, she said, are her companion, adding that she continues to learn from them.

“Make reading your habit, it helps you to travel the world through your mind,” she said. Flipping the pages of her favourite book takes her to places she hasn’t been, broadening her perspective.

Smith informed that she reads across the spectrum – as she leads a bunch of Generation X personnel, she needs to think like them and get to know what motivates them.

She said she idolises Colin Powell, a four-star general and former US Secretary of State, author and diplomat who, like Smith, shares Jamaican heritage.

“I have read his biography, which is very inspiring, and would like to meet him one day,” she said.

Rising from the ranks, Smith said, that one has to treat all jobs alike, “No task is menial,” she said. “Whatever you do, give it the best, and seize every opportunity.” Getting an education, she said, is critical to open the doors – and all of this comes with hard work.

She was quite emotional when she was commanding the vessel which is named after Oscar P. Autin, a US Marine who sacrificed his life saving his colleagues in Vietnam, brings a sense of nostalgia in Smith.

“He was only 20 years and gave his life,” she said. “We honour that sort of sacrifice, and my crew is trained and ready.”

In the words of Smith’s idol, Colin Powell, “There are no secrets to success. It is the result of preparation, hard work, and learning from failure.”

Smith continues to navigate her path amid the unknowns and the unfathomable.

This feature was originally published in The Weekly Gleaner – North American Edition. amitabh.sharma@gleanerjm.com