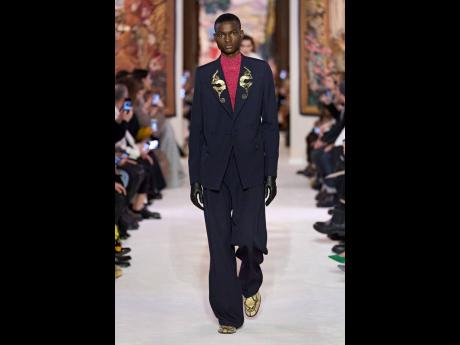 Lawrence walking the runway for Lavin Fall 2020 collection in Paris. 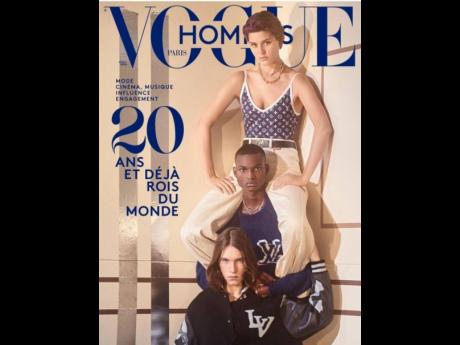 THE 20TH-YEAR celebrations of supermodel maker Saint International has taken on added significance with the recent revelation that one of its newest male models, Lawrence, has achieved the stunning feat of being the first black male model to star on the cover of the prestigious Vogue Hommes magazine.

The announcement provides a welcome respite from the news about the ravages of the COVID-19 pandemic, which has dominated the news cycle in recent weeks.

The stunning achievement is even more poignant as it highlights another milestone for a Jamaican male model, and, indeed, black male models across the world.

The story of Lawrence’s meteoric rise to the top of fashion fame is one for the ages. The Jamaican model was discovered on his way from school (Port Antonio High) by a Saint scout. After viewing his photos, Dewight Peters, principal of Saint International Model Agency, requested to meet him and his mother in person. At the time, unknown to Lawrence, plans were in high gear for his career launch in an exciting way.

“This kid walks in and tells an entire room of people that his nickname is ‘Matches’ ‘cause him hot, and I told his mom he is going to be a star,” Peters fondly recalls. He also noted that the 6ft 2in (188cm) slender frame and facial features of Lawrence were so aligned as to guarantee success.

Lawrence was introduced to the casting team for Gucci and was flown to Milan to meet the team.

To prepare him for this career-defining meeting, Peters had numerous ‘how to walk for the runway’ training sessions. It was Lawrence’s first time travelling from Jamaica.

On the day he met the team, he was confirmed for the Fall 2019 collection of the Italian legacy brand that is Gucci – designed by the distinguished Alessandro Michele.

‘It was an amazing experience and I am very grateful. I am living a dream and I am loving every minute of it,’ Lawrence says. He admits that it is hard work, and he has to be the consummate professional at all times. However, he says he enjoys travelling to new countries for photo shoots and shows.

Following his history-making and career-defining moment at Gucci, Lawrence returned to complete his CXC exams and was successful in seven subjects.

FROM GUCCI TO COVER OF VOGUE

Lawrence’s fashion resume is dotted with some of the world’s most influential fashion names, which is indicative of his meteoric rise - Lanvin, Off-White and Dunhill. His editorial star turns include Numero Paris, Ambush Look Book, and others.