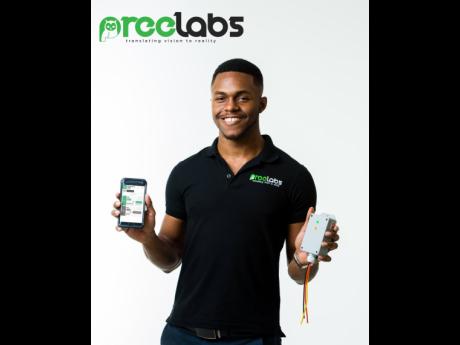 “I LIKE to solve problems. I like to make things. I like to make things that solve problems.” Yekini Wallen-Bryan knows these statements might sound cliché, but they have been his truth since he was a child. The minute he becomes aware of a problem, his brain starts breaking it down until he arrives at a solution, then he proceeds to make that solution a reality. He likened it to solving a jigsaw puzzle, getting all the little pieces together in the right order to create the big picture.

It shouldn’t come as a surprise, then, that he ended up founding a company that aims to solve one of the biggest problems Jamaicans face: the high cost of electricity – in fact, one of the highest in the world. His four-year-old company, PreeLabs Ltd, is best known for PowerPree, a line of devices that allow users to monitor and control their energy use with a companion Internet-based software system on their smartphone (app) or computer (website).

PowerPree had its genesis in the physics labs at The University of the West Indies, Mona (UWI), where Wallen-Bryan double-majored in electronics and energy and is currently working towards an M Phil in the same discipline. While in his undergraduate days, he was introduced to robotics by a friend and immediately found the perfect outlet for his particular set of skills. He joined the robotics team and worked his way up to the position of captain. He also became a coach and student adviser. “Every year, there was a new challenge, and the skills that I got from robotics allowed me to go off and try to make my own thing,” he said.

Wallen-Bryan’s obsession with making his own thing would find the perfect outlet in 2016, during his final semester as an undergraduate student. That January, he learnt of the Caribbean Climate Innovation Center (CCIC) GreenTech Startup Bootcamp to be held in late February, and decided he had to be part of the action. He just needed an idea that could win. His initial goal was to develop a smart, energy-saving extension cord, but the device was missing something. Recalling a mobile app he’d created that used Bluetooth technology to switch electronics off and on, he and his team combined both ideas into creating what was then known as Plug & Pree, now renamed PowerPree, a power outlet regulator and motion detector controlled by smartphone.

“We won and got accepted into the World Bank-funded accelerated programme. They gave us seed funding and training that helped us with market research and business training that we needed to help us get to a sustainable business,” he said.

With no prior business background, Wallen-Bryan and his team had to do extensive research and self-training to get up to speed on the world of commerce, as well as how to prepare their product for the market. PowerPree took two years to develop for commercialisation. Between 2016 and 2018, there were numerous iterations and revisions, and by the end of 2018, they had the first version of the product ready to go.

“I did not have a plan for it [to become an entrepreneur]. Really and truly, I had a product. I guess I should say I have a certain skill set. I can make things pretty quickly. I can build things quickly. I can figure out problems quickly. That translated into me having a product, and I realised that the best way to actually get this product out there is to figure this out,” he explained. “So those two years between the idea stage and commercialisation was a lot of training. There’s a lot that separated the idea stage from the commercialisation stage that we weren’t necessarily aware of at the time, but we figured it out and we got there – not just from a business and regulation perspective, but the technical side as well, since we wanted to produce something that was not just sellable in the Jamaican market, but internationally.”

PreeLabs is the latest company to be brought under the wings of FirstAngelsJA (FAJ), Jamaica’s first network of angel investors. The deal is almost complete, but Wallen-Bryan is already seeing some benefits from his association with the network, and he is looking forward to the financial investment to be able to put some of his plans into action.

Before FirstAngels, the primary source of funding for PreeLabs was the cash prizes that accompany the awards they won. The company also received an IGNITE grant from the Development Bank of Jamaica. Wallen-Bryan first came into contact with the Angels last year. “I’ve always heard the FirstAngels name. I guess being in the start-up sphere for a number of years, you hear about angel investors and investment groups in Jamaica. The first time I actually started learning about them was at Sandra Glasgow’s BizTactics workshop last year, where I was invited by Private Sector Organisation of Jamaica,” he said. Glasgow is the co-founder and manager of FAJ. “It was a very useful two-day workshop, very intense. There was a lot of information that I wish I’d had a couple years ago, but better late than never. Then I had to do a pitch and I got accepted to receive some business coaching. After that, I was able to do a pitch to FAJ to see if the Angels would invest.”

BALANCE IN HIS FAVOUR

Although the workshop was intense, Wallen-Bryan is an old pro at pitching, since he’s done it successfully several times over the past few years. “The environment is familiar to me. The questions are always different and it all depends on the types of people who are asking, but I know the different types of people and the types of questions they ask, generally speaking, so I know how to respond,” he shared.

“Feeling out the room in terms of the people who were responding, I could tell there were mixed receptions. Of course, there are always going to be sceptics, especially when it comes to investments, but there are always people who are willing to see the potential of something. They’re able to identify the things that make us really unique and competitive and are able to see that there’s potential for growth, and I could feel that coming from the room as well. At the end of the day when I finished and went home, I wasn’t sure what to expect. I just knew that tomorrow, I was going to wake up and do exactly what I was doing before, and that’s trying to grow this business in the fastest way I can and get this product out there as quickly as possible.”

In the end, the balance was in his favour as several Angels came on board. Wallen-Bryan believes the Angels signed on because PreeLabs is producing solutions-oriented products. Not only that, the engineering is done right here in Jamaica.

Wallen-Bryan has an expansive vision for PreeLabs and its products. “I think it can easily become a household name and a Jamaican standard, a brand that can be recognised throughout the region as an example of what Caribbean innovation can look like and the standards that we can set. It shows that we can innovate; we don’t have to buy things from China. We can innovate and export. We can do tech. We can do manufacturing,” he stated. “I’m hoping this year can be a big year for PowerPree, but PowerPree is just the beginning. I have a few pretty big deals I’m trying to close now. I closed one already, and we’re working to deliver on it now.”

In addition to the upcoming WaterPree, “There are a lot of other products I want to put out there that solve a lot of problems that Jamaica has in terms of infrastructure. We want to be able to be the go-to company for those solutions.”