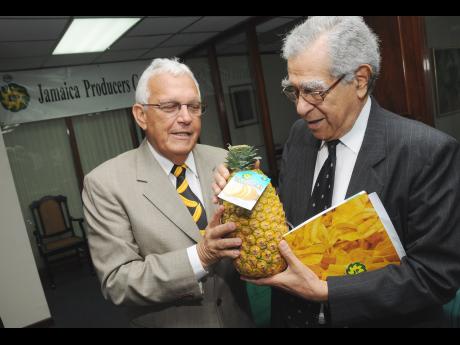 Contributed
Emil George (right), and Charles Johnston, past president of the Shipping Association of Jamaica at the 2012 Jamaica Producers Group annual general meeting. 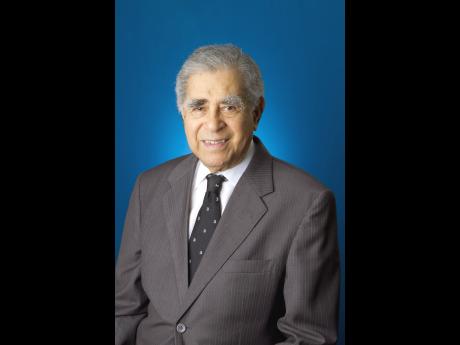 The Shipping Association of Jamaica (SAJ) has hailed the late Emil George, QC, for his tremendous contribution to the framing of a modern port-labour system and for his astute guidance of trade union negotiations as one of the association's former legal advisers.

"The association has benefited tremendously over the years from Emil's counsel; his being one of the finest legal minds in the practice of Jamaican industrial relations and commercial litigation. We are proud to have benefited from his well-reasoned analysis, expertise and sound judgement in honing a modern, viable framework for port-labour relations during a tumultuous time in our history. Our condolences to his family on his passing," said SAJ Group CEO Trevor Riley.

George commanded tremendous respect from many in the shipping industry, emanating from his experience and skill with industrial relations matters. He was a key player for the SAJ as it sat through the Muirhead Commission Board of Enquiry, which reported on working conditions at the Port of Kingston in 1998. George is credited with assisting the association to provide a balanced position before the enquiry. The resulting report from the commission galvanised the port to transform its restrictive labour practices and introduced flexible work arrangements which improved efficiency on the ports and Jamaica's competitiveness in the region.

Alvin Henry, who became general manager of the SAJ in 1981, and now sits as its industrial relations consultant, said the late Emil George was the person from whom he consistently sought legal counsel during his tenure.

"As a lawyer, he had an extraordinary level of experience with industrial relations overall and he was the sort of person who I could talk to any time of the day or night. I found his counsel and advice most invaluable during my tenure," he said, noting that George's greatest contribution to shipping was his leading deliberations that resulted in the landmark 1998 agreement that modernised port labour.

"As our labour attorney, he was extremely sharp and extremely quick-witted. He brought such authority and knowledge to our deliberations and was such a remarkable person that even the unions on the other side had no option but to respect him," Henry also noted.