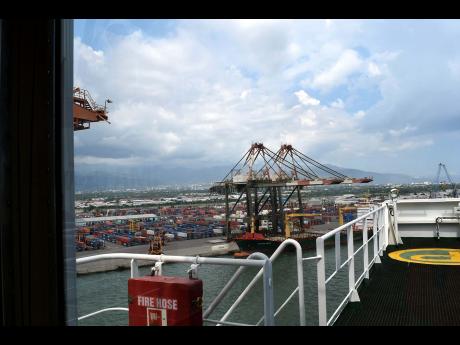 Contributed
The busy Port of Kingston seen from the observation deck of the CMA CGM vessel - the Almaviva during its first call at the port in September.

Olivier Tretout, the CEO of Kingston Freeport Terminal Limited (KFTL), is one of the most anticipated presenters at the Caribbean Shipping Association's Annual General Meeting, Conference and Exhibition, to be held in Cartagena, Columbia, from October 19-21.

The new CEO is expected to share the vision of the company and how he intends to breathe new life into the execution of long-awaited development plans at the facility and is likely to receive an enthusiastic greeting from delegates attending the CSA's annual industry gathering. Tretout will address delegates on the topic, 'The Privatisation of the Kingston Transhipment Terminal in Jamaica' on Wednesday, October 21, which is the final day of the three-day conference.

The historic privatisation deal signed in April of this year between the international consortium comprised of Terminal Link Ltd and CMA CGM and the Port Authority of Jamaica is an issue which has received much regional and international attention in the last few months. The development of the terminal has been hailed by Jamaica's minister of Industry investment and Commerce, Anthony Hylton, as "one of the critical planks of the proposed [Jamaican] logistics hub". Hylton further identified the project as, "... one of five core infrastructure projects that has to be in place when the expanded Panama Canal is reopened".

Terminal Link Ltd and CMA CGM hold equity interests of 40 per cent and 60 per cent, respectively, under the concession agreement with the Jamaican Government, that will give KFTL a 30-year term with the right to expand, finance, operate, maintain, and transfer the terminal. The agreement will also see the concessionaire dredging the access channel to the Kingston Harbour and the basin of the port to allow for the handling of larger vessels.

This project is expected to be a game-changer for regional shipping, as it will allow the terminal to capitalise on some of the geographical advantages which it already has. Tretout has been quoted as saying, "The project to widen the Panama Canal will require a major reorganisation of shipping, particularly in the Caribbean and North America region. The new Panamax vessels, with capacities up to 12,500 TEUs, will be able to cross the canal, compared to the current limit of 4,000 TEUs., Transport distribution will only be possible from a hub that can accommodate these giants. With the expanded Panama Canal, we have to think about future services operating larger vessels."