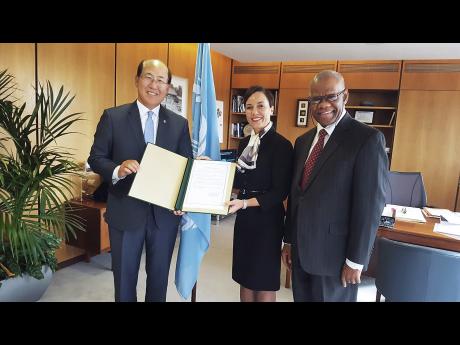 Contributed
Senator Kamina Johnson Smith (centre) along with Kitack Lim (left), secretary general of the International Maritime Organisation (IMO) and Seth George Ramocan, High Commissioner of Jamaica to the United Kingdom, during the courtesy call at the IMO headquarters in London in September 2017.

Jamaica deposited its instrument of accession to the Ballast Water Management Convention on September 11. Ballast water is used to control the stability of a ship to ensure its safe operation when it is empty or partially loaded, and the convention seeks to prevent and reduce the transfer of harmful aquatic species and pathogens carried in ballast water.

Over 10 billion tonnes of ballast water are transported annually and the invasive alien species in ballast water not only poses serious environmental risks, but significant public health risks in the form of pathogens such as cholera. Measures are already in place to require ships arriving from cholera-affected countries to exchange their ballast before entering Jamaican ports.

Jamaica has taken major legislative, policy and institutional measures to implement the convention, including the development of a national strategy and the establishment of an inter-agency task force chaired by the Maritime Authority and with representation from the Port Authority of Jamaica, National Environment and Planning Agency, Shipping Association of Jamaica and the Ministry of Health.

Implementation will involve Jamaican ships operating worldwide and foreign ships calling at Jamaican ports, the latter will involve the inspection by state control officer from the maritime authority.

The accession by the Jamaica to the convention was as joint effort between the Ministry of Foreign Affairs and Foreign Trade and the Ministry of Transport & Mining led by Mike Henry, who placed the development of the incorporating legislation on the priority list for this year.

Jamaica's accession to the convention demonstrates the country's commitment to the support of the work of the International Maritime Organization (IMO) in the protection of the marine environment and will give it a major boost to its candidature for election to the Council of the IMO, Category 'C', for the period 2018-2019. The elections are scheduled to be held during the 30th regular session of the IMO Assembly in London in December.