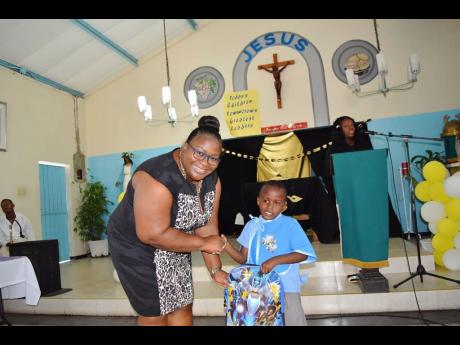 Contributed
Janice Budd presenting a gift to a student graduating from the SAJ’s adopted school, Marcus Garvey Basic School in 2015. 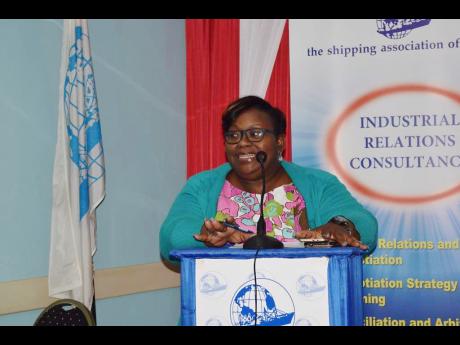 Contributed
Janice Budd speaking at a graduation ceremony for stevedores trained by the Shipping Association of Jamaica. 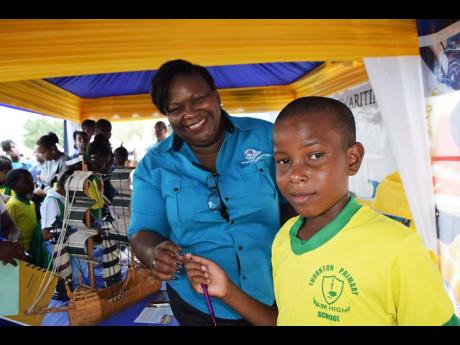 Contributed
Janice Budd interacting with a student at the 2016 National Mathematics Expo.
1
2
3

"Who can get used to death? It is an expected end, but when it takes the people you cherish, memories are never enough to fill that permanent, gaping hole.'' - Shorna-Kay Plummer, Caribbean Shipping Association.

The Shipping Association of Jamaica (SAJ) joins the media fraternity and all of Jamaica in the mourning of Janice Budd. Budd, who was famously known for her work in journalism, was at the time of her death, operations manager for the communications and member services department at the SAJ. She died on January 2 after a long and courageous battle with cancer.

Budd joined the SAJ almost three years ago. Though her tenure was short, she made a strong impact that has formed part of the impressive legacy she had already made for herself during her journalism career - a career that spanned more than 20 years. She brought to the association her excellent communication skills, garnered from her days working at some of the island's top media houses. She started out in broadcasting, working at the Jamaica Broadcasting Corporation, Jamaica Information Service, CVM Television, Radio Jamaica, and Television Jamaica. She then transitioned to print when she took up the post of Sunday editor at the Jamaica Observer. She received several journalism awards, the last being the 2011 Carl Wint prize for Human Interest Feature stories, which she shared with Observer features editor, Kimone Thompson. The award was for a series of mental health articles called 'Matters of the Mind'. Budd later entered the field of corporate communications, joining the National Commercial Bank and then the SAJ.

Group CEO of the SAJ, Trevor Riley, said that they (the association) had lost "a gifted colleague". He said Budd had quickly ''endeared herself to the shipping community'' when she joined the team and was "relentless in the delivery of quality service."

Past president of the SAJ and honorary member of the Managing Committee, Harriat Maragh, remembered Budd for her work ethic. ''She was welcomed into the shipping community from day one, as her reputation preceded her. I recognised from the start that she loved her work; as someone committed to excellence, she was a stickler for details.''

Operations Manager for Property and Administration at the SAJ, Dionne Gordon, said that Janice's disarming smile and excellent journalism skills made her transition into the SAJ very easy. Budd has been described as a team player who was always willing to help and give a listening ear.

''It was fun working with Janice, from our business travel to our after-work conversations. I could always go to bounce ideas off her or ask her to look at something I was writing.''

Her welcoming personality is something almost every staff member sharing memories of her spoke of.

'I WILL NEVER FORGET'

Accounting Clerk Jodian White said: "What I will remember most about her is her smile. She was very positive and was always giving words of advice and encouragement. Even in her sickness, she was always concerned for the other person, asking how they were, making sure they were all right. She was very grateful. Every time we would visit her, she would express how grateful she was for our visit and our prayers. She made God the centre of everything she was going through. And even to the very end she would say, 'Girl, I'm holding on.'''

SAJ Internal Auditor Jean Hinds Bell shared her colleagues' sentiments, stating, "She was such a sweetheart. Though she wasn't here for very long, it seemed as if she had been here forever. Every day at work since she fell ill, I would look out for her return. Her presence touched me personally, as even during her illness, she made the effort to attend my wedding. That is something I will never forget ... her kindness is something I will never forget. That and her unwavering resilience in the face of her illness.

On the lessons she learnt from Budd, White had this to say: Don't take anything in life for granted.

Similarly, Accounting Officer Camille Spence said, ''What I've learnt from witnessing how Janice dealt with her illness is to stay positive regardless of life's circumstances. Janice never felt sorry for herself. She remained positive and upbeat till the end.''

Financial Controller at the SAJ Raymond Ernandez said that Janice's illness was a wake-up call for him to become more aware of cancer and in particular, how to prevent it.