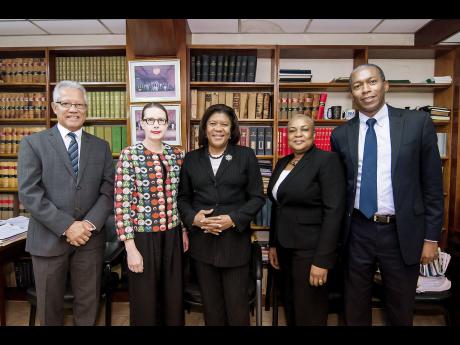 The Maritime Authority of Jamaica (MAJ), in fulfilling its role to capacitate local entities to handle international maritime matters, hosted a seminar for Supreme Court and Court of Appeal judges. The session was held to raise awareness specifically in the area of maritime law, covering an outline of admiralty jurisdiction, arrest procedure and the different types of maritime claims which may be brought before the Supreme Court. The attendees included Chief Justice Zaila McCalla and more than 40 judges who were all pleased to receive the exposure to admiralty law proceedings.

The Australian Maritime Safety Agency, a counterpart of the MAJ, sponsored the visit of Professor Sarah Derrington, who administered the seminar. Professor Sarah Derrington was the academic dean and head of school of the T. C. Beirne School of Law at the time of the delivery of the training. She has since been appointed the president of the Australian Law Reform Commission (ALRC) and as a judge of the Federal Court of Australia. She has resigned from her position at the law school and started her new roles at the ALRC and Federal Court of Australia.

Along with James M. Turner, QC of the English Bar, she has written one of the leading common law texts on admiralty law and practice and has published widely on matters relating to carriage of goods by sea, marine insurance, and admiralty jurisdiction. Professor Derrington has taught a variety of courses in marine and shipping law from undergraduate to postgraduate levels.

During her visit to Jamaica, Professor Derrington also addressed members of The Jamaican Bar Association at its annual Bar Conference, held in Montego Bay, under the theme 'An introduction to Maritime Law with special focus on the arrest of ships'.

Bert Smith, director of legal affairs at the MAJ, said: "This seminar is the first of its kind for our judiciary and is timely, having regard to the significant increase in the number of matters that have come before the Admiralty Division of the Supreme Court in 2017.

"There have been several developments in the shipping industry in Jamaica, including the 30-year concession granted to CMA CGM to operate the transhipment terminal, the introduction of LNG, bunkering, and the dredging of the Kingston Harbour to accommodate post-Panamax vessels, all of which will result in an increase in the number of ships calling at our ports and transiting Jamaican waters.

"These developments, however, have the potential to give rise to a number and variety of claims which will have to be heard by judges in the Admiralty Division in the Supreme Court," Smith explained.

About the Maritime Authority of Jamaica

The Shipping Act 1998 established the Maritime Authority of Jamaica as a statutory body with separate legal existence to administer the registration of ships, regulate matters relating to merchant shipping and seafarers, and to administer policy for the development of shipping in general.