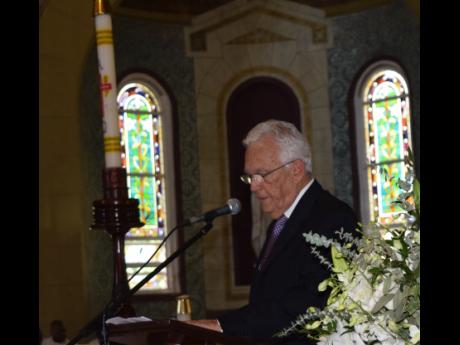 This is part two of a series covering the shipping industry's tribute to Noel Hylton delivered at a service commemorating his life by Charles Johnston, honorary board member of the Shipping Association of Jamaica. The service was held at the Cathedral of the Most Holy Trinity on March 10, 2018.

TONY, THE ADMINISTRATOR AND MANAGER

"In 1966, Tony was appointed general manager by Paul Scott, the then chairman of the Shipping Association of Jamaica (SAJ). Paul recalls Tony as a professional manager and a good and trusted associate, who, by his leadership and example, helped to improve and strengthen the capabilities of the SAJ during his tenure as general manager.

"During my time as chairman, we trusted and relied on Noel (Tony) Hylton to lead the management team and keep the organisation running smoothly and accomplishing agreed goals and objectives.

"The port worker agreements were accomplished through negotiation at the JIC with the cooperation and agreement of Kingston's three waterfronts unions and worker delegates representing Kingston port workers.

"The result was significant changes to working conditions of Kingston port workers, including:

- a shift system replacing the old system of 'spelling';

- changing the cess system from a percentage of payroll to a cess per ton of cargo.

"We were fortunate that Noel (Tony) Hylton ... accepted our invitation to join as general manager. He rose to the occasion, improving SAJ's capabilities to the benefit of the membership, the shipping companies, port employers, port workers, the port of Kingston, and indeed Jamaica.

"Past President Geoff Collyer, who was one of the chief negotiators of the 1966 agreement, concurs. He said: 'Tony worked hard in 1967 when we implemented the premier labour scheme of the workforce for the Port of Kingston. Before those days, Kingston was like a battle field and after '66, everything changed and the port settled.'

Past President Robert Bell said Mr Hylton was a true patriot who was committed to Jamaica and loved his country. He was instrumental in the development of the ports of Jamaica. Most recent of which was Falmouth.

"As an individual, he was very humble, very kind to people, and never forgot the workers on the ports.

"Captain Michael Belcher, who worked with Tony both at the Port Authority and at the SAJ, said that 'Today, many, and in particular those of younger generations, may take for granted much of the technological advances now existing in the Port of Kingston as well as the conditions enjoyed by its workers.

"Before these changes, the port of Kingston consisted of a dozen or so dilapidated finger piers, each congested with general cargo which was disgorged into Port Royal Street, bringing traffic downtown to a standstill.

"Men with an average age of 62 years would work unbelievably long hours under atrocious conditions, handling all cargo manually. They received no pay unless they actually did work, received no sick leave or medical benefits, and retirement was compulsory at the age of 75.

"Paul Scott, then president of the Shipping Association, set up a small commission to recommend changes. Having reached consensus regarding these recommendations, the association was faced with the almost insurmountable task of implementation.

"Noel Anthony Hylton was selected, and turned out to be the most effective implementer our industry has ever known.'

"And so impressive were Tony's administrative skills that in 1975, the Port Authority requested his secondment to succeed Alfred Rattray. This challenge of implementation became Tony's lifetime ambition - guiding the physical development of the port's infrastructure and superstructure through five different phases and witnessing its volumes grow from 12,000 TEUs in its first year to more than 2,000,000 TEUs at its peak.

"Mike Belcher ends with this plaintive plea: 'Let those in whose hands this dream resides make it come true. Noel Anthony Hylton deserves nothing less.'

"Roger Hinds, one of our most recent past presidents, echoes this view of Tony the Implementer, making the case that successive administrations have called upon Tony to lend his capacity for handling really large projects to undertake projects unrelated to shipping.

"Grantley Stephenson was associated with Tony for more than 40 years, (at JMM, then as president of SAJ) and expresses amazement at Tony's ability to simplify what appears to be complex issues and find solutions without appearing to be giving the matter serious thought.

He said that he saw up close Tony's uncanny ability to develop strategies and negotiate and at no time did he ever become flustered. It was very clear that he had one goal, and that was to develop the Port of Kingston into a world-class facility and that he did. He described Tony as a tremendous teacher who freely shared his vast knowledge of the industry. Apart from being clever, Tony was moody and therefore it was very important to assess his mood the moment you made eye contact. If Tony liked you, he would only quarrel with you when there was a disagreement, but if he did not like you, he would avoid you like the plague.

"Kavan Gayle, president general of the BITU, says that not only that Tony was a friend of the BITU, of Hugh Shearer and of Lascelles Beckford, but that on many occasions he used his status as a member of many important boards and his friendships with both unions and employers to assist on complex issues affecting labour relations nationally. He assisted to avert many a strike just by bringing both sides together.

"Michael Bernard and Harry Maragh, two other past presidents of the SAJ, speak highly of Tony's negotiating skills on the Port of Kingston, the latter honouring Hylton with the SAJ's Lifetime Achievement Award in 2005.

"Denise Lyn Fatt, the current president of the Shipping Association, and might I say the first female president, said that Mr Hylton simply fell in love with shipping when he joined the industry. His work was infused with a passion that saw him introducing a number of developmental and reorganisational initiatives, not only within the SAJ, but also in the wider port and shipping Industry.

"The industry is grateful for his contribution."