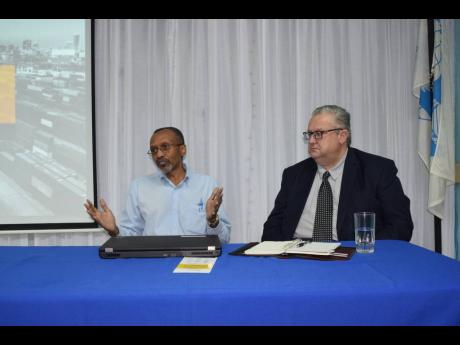 Chief information officer of The Trade Board Limited, Carl L. Morgan (left), shares a word with Trevor O’Regan, the team leader of the Jamaica Trade Information Portal Project, at a stakeholder sensitization meeting, held for members of the Shipping Association of Jamaica recently.

‘At long last’. This was the sentiment expressed by members of the Shipping Association of Jamaica as they viewed the proposed Trade Information Portal (JTIP) at the association’s offices recently. A trade information portal is a resource provided by governments to traders in order to deliver information that importers or exporters in a given country may require in order to comply with their regulatory obligations for export or import.

The JTIP initiative, which was spearheaded by the Trade Facilitation Taskforce, forms a part of an effort to fulfil Jamaica’s obligations under the Trade Facilitation Agreement (TFA) which came into force on February 22, 2017. The TFA contains provisions for expediting the movement, release and clearance of goods, including goods in transit. It also sets out measures for effective cooperation between Customs and other appropriate authorities on trade facilitation and customs compliance issues

Implementing a single source of trade information is a logical step in fulfilling the obligations of the TFA. The trade portal is intended to increase transparency and predictability of trade procedures and, in doing so, increase the compliance level while reducing the cost of doing business through trade.

The JTIP will house information on the laws governing trade; facilitate tariff enquiries for commodity codes and other measures and procedures; list permits, licences and certificates needed for imports and exports; indicate steps required for obtaining permits, licences and certificates required for imports and exports; list restrictions and prohibitions related to trade; lists the government agencies involved in import and export; and list the fees and charges associated with trade in Jamaica.

Andre Rochester, chairman of the Agents’ Committee of the Shipping Association of Jamaica, praised the team for the hard work they have done so far and challenged them to find ways to make the JTIP sustainable with a strong governance frame work. The JTIP is scheduled to go live on May 16, 2019.