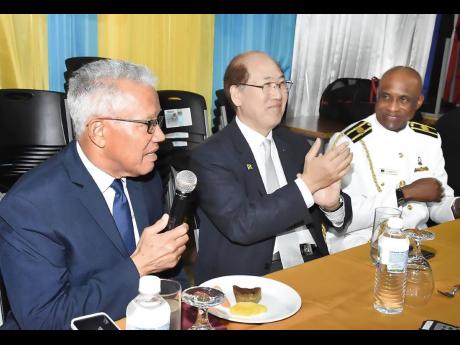 Managing director of the Maritime Authority of Jamaica, Rear Admiral Peter Brady (left), expresses thanks to Professor Fritz Pinnock and his team during a welcome reception, for facilitating the visit of the secretary general of the International Maritime Organization, Kitack Lim (centre). 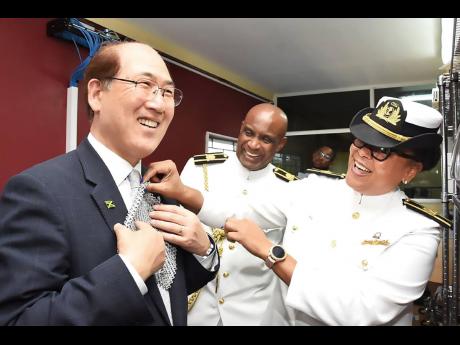 Erica Simmons, executive director of the university’s Centre for Digital Innovation and Advanced Manufacturing, where the item was printed, and secretary general of the International Maritime Organization, Kitack Lim examine a flexible 3D printed chain link, which can be viewed as artistic fabric, while Professor Fritz Pinnock, president of Caribbean Maritime University, looks on. 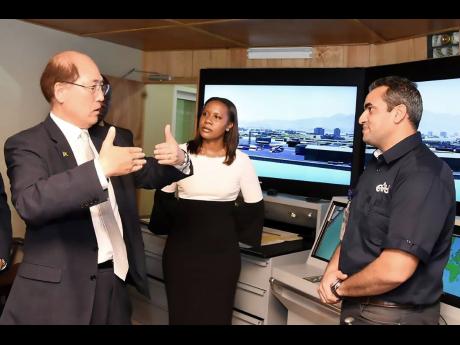 Secretary General of the International Maritime Organization (IMO) Kitack Lim visited the Caribbean Maritime University (CMU) on Tuesday, February 26, to tour the facilities and meet with the management team, students, faculty and staff. The IMO is the highest regulatory international body in the maritime industry, and the last time a secretary general (his predecessor) visited CMU was over five years ago.

CMU is the only IMO-recognised maritime university in the region and it is authorised to offer courses for standards of training, certification and watchkeeping together with the Maritime Authority of Jamaica (MAJ), which certifies competent seafarers for the global maritime sector.

Lim was accompanied by director general of the MAJ, Rear Admiral Peter Brady, and director of the Technical Cooperation Division of the IMO, Juvenal Shiundi. He was received by CMU president, Professor Fritz Pinnock, and welcomed by a party of executives who led his tour of the centres of excellence on campus. Professor Pinnock shared that it was an honour to welcome the secretary general of the IMO at such an important juncture in our industry, which is being re-engineered by technology.

Professor Pinnock also stated that Lim was impressed with the integration and contribution of women in leadership of the CMU, especially in light of the World Maritime Day theme for 2019, ‘focusing on women and also the application of the most sophisticated technologies in our training’. “We are ranked among the best maritime universities in the world,” he said.

This courtesy call formed part of his visit to Jamaica, which entailed meetings with key stakeholders in the maritime industry, such as the MAJ and Jamaica Defence Force Coast Guard. Lim also attended a high-level symposium, hosted by the MAJ and chaired by Robert Montague, minister of transport and mining. The event was attended by transport ministers of the Caribbean region and was themed ‘Maritime Transportation: Harnessing the Blue Economy for the Sustainable Development of the Caribbean’. Both the president of the CMU, and vice-president and executive director of the Centre of Blue Economy and Innovation, Ambassador Joachim Schmillen presented on the theme.

A native of the Republic of Korea, Lim, graduated from the Korea Maritime and Ocean University, Busan. He served on ships as a naval officer before joining the Korea Maritime and Port Administration in 1985. From 1986, Lim participated in the Republic of Korea’s delegation to IMO meetings. In 2006, he was appointed maritime attaché, minister-counsellor at the Embassy of the Republic of Korea in London and served as alternate permanent representative to the IMO until August 2009. Lim was then appointed director general for the Maritime Safety Bureau at the Ministry of Land, Transport and Maritime Affairs. He was appointed commissioner of the Korean Maritime Safety Tribunal in 2011. One year later, he became president of Busan Port Authority until January 2016, when he took up his appointment as secretary general of IMO. Lim holds master’s degrees from Yonsei University, and the World Maritime University.