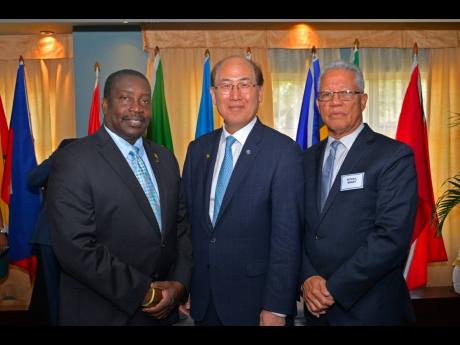 The Maritime Authority of Jamaica (MAJ) hosted regional ministers of maritime transportation and international maritime development at a high-level symposium (HLS), held in Montego Bay recently under the theme ‘Maritime Transportation: Harnessing the Blue Economy for the Sustainable Development of the Caribbean’.

The objective of the HLS was to update policy-makers on the important challenges the states in the region face in ensuring the preservation of the marine environment on which they are heavily dependent for their socio-economic well-being. The intent was to identify strategies to assist states in meeting their obligations under the IMO Instruments to which they are party, particularly the marine environment protection, and liability and compensation instruments.

Keynote speaker Robert Montague, minister of transport and mining, informed the gathering that the ministry is actively pursuing the promulgation of key pieces of maritime legislation which will strengthen the framework for the protection, response, and restoration of the marine environment. The ministry is also currently engaged in consultations with key stakeholders as it embarks upon the revision of the National Transport Policy, which will promote environmentally sustainable maritime transport.

Minister Montague noted that “when one adds the fact that the Caribbean region is the world’s premier cruise ship destination, that about 33 per cent of world crude oil passes through the region, and with other commodities, 30 per cent of world maritime trade transits our region, we owe it to our people to preserve and protect it, but also to make it safe.”

He further said, “It is often not realised that there are real risks of serious pollution incidents which are associated with the carriage of large volumes of oil and other noxious substances. Many of us are not aware that the largest recorded pollution incident in the history of shipping occurred in the region, when two very large crude carriers, the Aegean Captain and the Atlantic Empress collided 10 miles off the coast of Trinidad and Tobago in 1979, resulting in approximately 287,000 tonnes of crude oil being discharged.”

Maritime administrations of the region, he said, have been entrusted with the regulatory oversight and responsibility for safe, secure, efficient and environmentally clean shipping within our respective states.

The Maritime Authority of Jamaica

Through the efforts of the MAJ, Jamaica has tabled its Ballast Water Management Bill in Parliament. This bill is aimed at protecting Jamaica’s marine environment with the implementation of measures to prevent the transfer of invasive aquatic species and pathogens in the ballast water of ships, which pose risks to public health (including cholera), fisheries and other areas of Jamaica’s economy.

The minister reiterated the importance of maritime issues to Caribbean states. He noted that for Jamaica and most, if not all, states in the Caribbean, the ocean is an invaluable resource that is full of potential for economic growth and job creation. The majority of the population (61 per cent) live in communities within five kilometres of the coast. The island’s two cities (Kingston and Montego Bay) and eight other parish capitals are also located along the coast.

“Notwithstanding the importance of the blue economy to Jamaica, marine pollution by ships, overfishing, marine litter and coastal development could endanger efforts to harness the potential of our seas for sustainable development.

“The blue economy concept advocates for a balance between economic growth, improvement of livelihoods and ocean sustainability. That means, for Jamaica to fully leverage the blue economy, including, inter alia, the potential for deep-sea mining and renewable energy, it must address current and potential challenges to environmental sustainability,” he added.

During the high-level symposium, the ministers and senior government officials of maritime transport were brought up to date and briefed on several areas of topical relevant maritime matters, which resulted in the adoption of a resolution, which included the adoption and implementation of IMO instruments by member states in the region, as well as a regional action plan.

The HLS was represented by the governments of Anguilla, Antigua and Barbuda, The Bahamas, Barbados, Belize, Cayman Islands, Curaçao, the Commonwealth of Dominica, Grenada, Guyana, Haiti, Jamaica, St Kitts and Nevis, St Lucia, St Vincent and the Grenadines, St Maarten, Suriname, and Trinidad and Tobago.