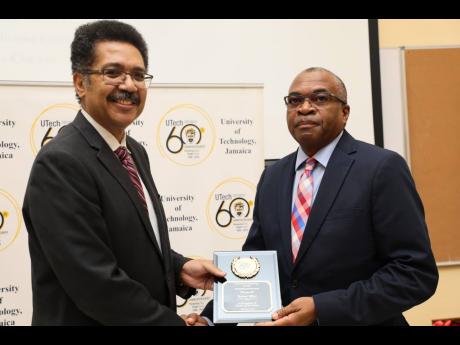 On Thursday, March 28, 2019, the University of Technology (UTech) presented awards to various distinguished alumni who were nominated for the Outstanding Alumni Award 2019, as part of a year-long celebration of the university’s 60th anniversary.

The criteria for selection required that nominees be persons of integrity, maintaining a profile which can be emulated by other members of the alumni community and the current student body.

Riley, who has provided executive leadership at the SAJ for a decade and a half, currently manages a team of more than 400 persons providing a range of services, including the supply of labour, security and information technology, property services, and investments.

He has worked previously in banking, tourism and media, notably serving as managing director of the Jamaica Observer and deputy director of tourism. Recently, he has been serving the parish of Kingston as a justice of the peace. Now recognised as a distinguished alumni, he holds a Bachelor of Laws degree (Upper Second-Class Honours) from UTech, in addition to his other academic credentials. He currently sits on the advisory board of the Faculty of Law at UTech.

Other notable recipients of awards include Elaine Thompson, Olympic medallist and double Olympic champion, who received the most prestigious award of the University, the Chancellor’s Medal. Chancellor’s Special Recognition Awards were given to the Jamaica Hotel and Tourist Association and the Jamaica Tourist Board.