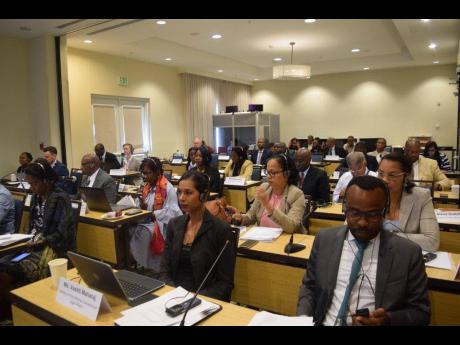 Participants in the June 2019 Arms Trade Treaty sub-regional Workshop held in Kingston are assisted by the translator as the Haitian representative (not shown) presents his country situation report. 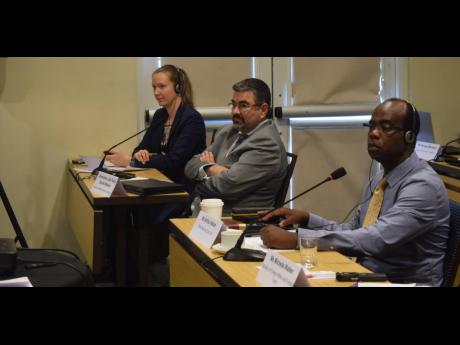 Participants in the June 2019 Arms Trade Treaty Subregional Workshop held at the Marriott Courtyard in Kingston. 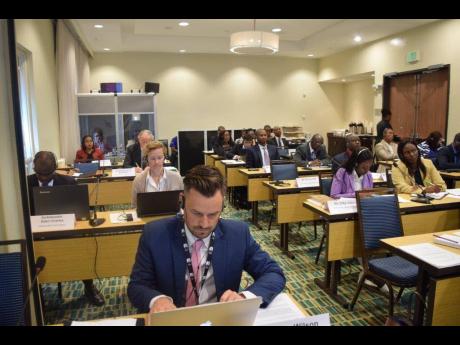 This week Jamaica hosted a CARICOM sub regional workshop focused on the implementation activities of the Arms Trade Treaty (ATT). The German Federal Office for Economic Affairs and Export Control (BAFA) and Expertise France (EF) sponsored the activity, which ran from June 10-11 2017 to facilitate the second phase of the EU’s activities in support of the implementation of the ATT. Barbados, Haiti, Trinidad and Suriname joined Jamaica for intensive discussions involved in the implementation of the treaty. This project, is co-financed by the Government of the Federal Republic of Germany, the Government of the French Republic, BAFA and EF.

The Shipping Association of Jamaica’s (SAJ) representatives joined the Jamaica delegation which was constituted mostly of government’s law enforcement agencies in the exploration of the legal shipping and cross border movement of restricted arms.

The main objectives of this project are to promote the effective implementation of the ATT by supporting beneficiary countries in strengthening their arms transfer control systems and to work towards the universal adoption of the treaty. In order to achieve these goals, this EU project strives to establish and strengthen expertise and arms transfer control capacities in the beneficiary countries and to foster involvement of the relevant national agencies and representatives, as well as regional actors and organisations. Especially with regard to the universalisation of the ATT, outreach not only to beneficiary countries but also to their neighbours, as well as through regional fora and organisations represents a key component of the actions undertaken within the project.

The project offers dedicated national assistance programmes to strengthen long-term partnerships with beneficiary countries and to address multiple national implementation priorities through tailored assistance activities. These roadmap-based assistance programmes are developed in close cooperation with the partner countries. In addition to the comprehensive partnerships, ad-hoc assistance activities allow for a flexible and quick response to individual requests for support. Furthermore, regional outreach seminars provide a platform to discuss specific regional challenges relating to the ATT, share best-practice models, involve civil society actors and foster regional cooperation. In addition to the individual activities with the partner countries, the project actions also focus on expanding the existing pool of experts.

As indicated by its name, the Arms Trade Treaty regulates the international trade of arms. Its object and purpose, which is clearly spelled out in Article 1 of the treaty, is the following:

Establish the highest possible common international standards for regulating or improving the regulation of the international trade in conventional arms;

Prevent and eradicate the illicit trade in conventional arms and prevent their diversion;

for the purpose of:

Contributing to international and regional peace, security and stability;

In a nutshell, the ATT sets out global standards to conduct legal and rightful activities in a transparent manner. This, in turn, helps to identify where and how arms are diverted from the legal market and raises the bar regarding accountability for responsible transfers of arms.

A historic achievement of multilateralism

“To a burst of sustained applause, the General Assembly today voted overwhelmingly in favour of a ‘historic’, first-ever treaty to regulate the astonishing number of conventional weapons traded each year, making it more difficult for them to be diverted into the hands of those intent on sowing the seeds of war and conflict.”

The ramifications for Jamaica are significant as CARICOM focuses on a collaborative approach to the implementation of the treaty. This ensures that neighbouring countries are all held to the same high standards. This fosters greater information sharing and capacity building in the arena of intelligence capabilities. It will be more difficult for unregulated and unauthorized trading in arms as the region tackles threats together. Another positive outcome of regional collaboration is the opportunity for Caribbean nations to strengthen each other as they are able to draw on the strengths of their agreements with their sister nations to help with cross-border controls and investigations.

This workshop was hailed by the participants as the experts from the international community were are to share best practices with law enforcement, trade and arms controlexperts from Portugal, Hungary, Croatia and the United Kingdom. A second regional workshop focusing on the needs expressed by the participants is planned for later this year. Jamaica has ratified the ATT.