Countering proliferation challenges in the Caribbean 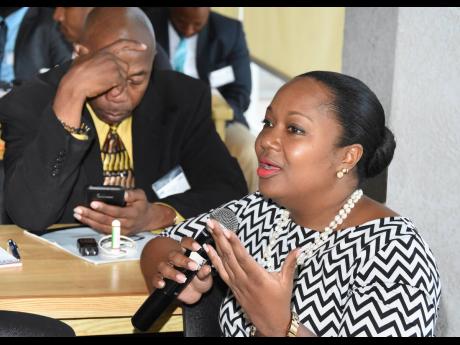 Member Services Officer of the Shipping Association of Jamaica Monique Morrison commending the organizers on the staging of the first conference on Countering Proliferation Challenges in the Caribbean Region, held on June 12 and 13, 2019. 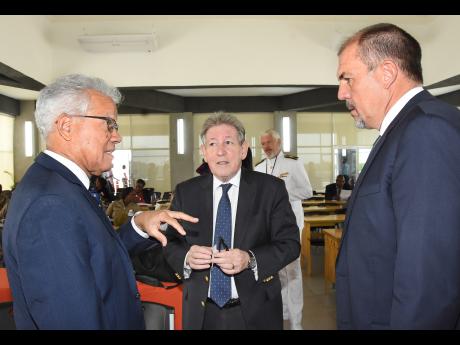 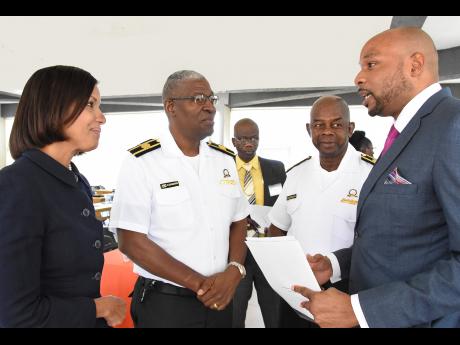 The first conference on ‘Countering Proliferation Challenges in the Caribbean Region’ hosted by the Centre for Security, Counter Terrorism and Non-Proliferation (CSCTN) was held at the Caribbean Maritime University (CMU) and was hosted in collaboration with US-based James Martin Center for Non-proliferation Studies. From left: Local CSCTN executives Winsome Packer, programme and conference Coordinator; Owen Ellington former Commission of Police and Executive Director of the Centre; and Assan Thompson, Head of Department, discuss the theme of the conference on day two, with Alwyn Nicely, Deputy Commissioner of Customs, Jamaica Customs Agency.
1
2
3

Presenting on United Nation (UN) Resolution 1540, Leonard S. Spector, deputy director of the Institute of International Studies’ James Martin Center for Non-proliferation Studies, focused on the raft of international treaties regarding non-proliferation and counterterrorism, explaining the requirements countries had to adhere to under each agreement. Also participating in the panel of experts was O’Neil Hamilton, member of the approved Roster of Experts, which advises the UN Security Council. He shared that Jamaica has consistently joined multilateral treaties and implemented them into national law. He highlighted that the Proliferation Security Initiative is an international effort that aims to prevent the spread of weapons of mass destruction, and their related components and materials. He explained how ships are boarded and inspected on the high seas to prevent the illegal spread of arms.

In his presentation, executive director of the CSCTN, Owen Ellington, reported that local gangs generate a high demand for trafficking in guns and other weapons. He fears that Jamaica’s proximity to the United States also makes it easier for criminals to access weapons from that gun-producing nation. Ellington says it would be relatively easy for criminals in Jamaica to shift from the use of small arms and guns to weapons of mass destruction. He also shared his fears that persons who commit murder for hire may be induced to commit other crimes for hire too, including terror-type crimes.

Former Assistant Commissioner of Police Assan Thompson, now department head for the CSCTN at the Caribbean Maritime University, reported that there are almost 150 uncontrolled ports of entry across Jamaica. This caused quite a stir in the audience as he provided a comprehensive map of the unmanned ports across the island and discussed their various threat levels. He shared that the large expanse of coastline along the south of the island in particular, makes it ideal as launching points for illicit activities. Thompson is warning that an illicit trade for guns could develop between Jamaica and Venezuela because of the current economic crisis affecting the South American country, such as currently exists with Haiti in the north.

Jamaica’s responsibilities with regard to UN resolutions, in particularly Resolution 1540 (2004), was a subject of the JCA presentation made at the conference by Deputy Commissioner Alwyn Nicely, who discussed maritime threats. The resolution requires all states to adopt and enforce appropriate laws to this effect, as well as other effective measures to prevent the proliferation of these weapons and their means of delivery to non-state actors, in particular for terrorist purposes.

He also explained the extensive radiation-detection equipment that Jamaica has currently at the sea and airports, in accordance with the requirements under the megaports initiative. He also highlighted the weaknesses which Jamaica has with post-detection follow-up as the Office of Disaster Preparedness and Emergency Management, the fire department, the police or other state agencies are ill-equipped to store, dispose of, or process irradiated cargo when they are detected. Overall, the container security initiative, he reported, has yielded good results.

The conference was well received by the audience of government, quasi-government, academic and private-sector interests. The attendees heaped praise on the organisers for their excellent conceptualisation, organisation and execution of the conference. Caribbean CSCTN is a department of the Caribbean Maritime University.