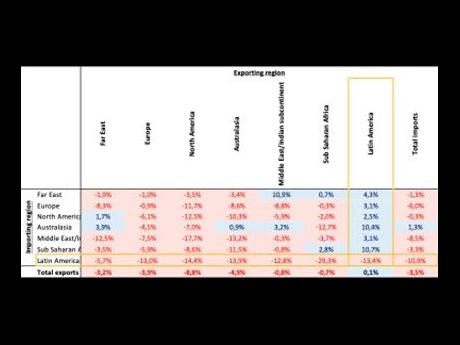 Data based on container trade statistics 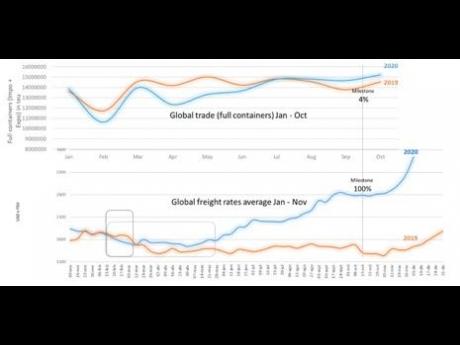 The sudden and prolonged action of COVID-19 on health, living conditions, and the world economy is being characterised by four fundamental elements: the pre-existence of adverse conditions, the extent of the effects, the speed of the impact, and finally, its intensity. A recent article appearing on the PortEconomics website notes that the effects have also been far-reaching, but with significant variations, on maritime trade throughout the world.

Looking at the first three-quarters of 2020, Ricardo Sanchez and Eliana Barleta revealed in their article appearing on the website on December 30, 2020, that the falls worldwide in container traffic were particularly marked in the months of April and May. These falls lasted a bit longer in Latin America after it was observed that in January and February, activity was still on the rise. In the cumulative period from January to September 2020, the fall in containerised maritime trade worldwide was 3.5 per cent, and in Latin America almost 11 per cent.

The PortEconomics article states: “In the first quarter of 2020, partially, and strongly in the second quarter, due to the adoption of strict measures by countries to control the COVID-19 pandemic, international transport and trade systems have been put under great strain. As a result of current circumstances, container trade volumes have varied significantly during the first 3 quarters of 2020.”

Citing data from Container Trade Statistics (CTS), Sanchez and Barleta note that for exports and imports between regions, for the period January-September 2020, the effect of the coronavirus has been tremendously strong. They observed a particularity in Latin America, which shows positive figures in exports, with the exception of intra-regional exports, with a fall of -13.4 per cent. With regard to imports, Latin America has been one of the hardest-hit regions, showing a strong imbalance between variations in exports and imports in the region. According to the information provided by Container Trade Statistics (CTS), in 42 of the 49 trade routes considered, volumes were lower than in the same period of the previous year as can be seen in the table presented:

With regard to sea freight rate, the PortEconomics report shows that despite the fall in the volume of containers mobilised globally, no significant falls have been observed in sea freight rates for containers.

The falls suffered by sea freight rates in the first three quarters of 2020 have been less drastic than those of the same period in 2019. However, it is significant to note that at the same time, they were much lower than in 2009 compared to 2008, considering similar drops in demand. It should be noted that on that occasion, during the period of maximum fall in transport demand, the reduction in freight rates was greater than at present. This is important to note because it shows a more pronounced capacity to manage quantities (and influence price levels) than that observed during previous crises.

At the beginning of 2020, the WCI (World Container Index, assessed by Drewry) was at a similar level to that observed at the beginning of 2019. In spite of this, and although the WCI has suffered, in both years, a decrease between January and April – which is influenced by the seasonal decline that normally occurs every year, between February and the beginning of March – the behaviour of the index during 2020 has almost always remained at higher levels than in the previous year. From October 2020 onwards, freight rates have exceeded 100 per cent increase with respect to the same time in 2019.

In the top graph, the data shows that from January to September 2020-2019, the cumulated growth of full sea containers around the world was of an average of four per cent (first graphic). At the same time period, in October 15, 2020, global freight rate index was 100 per cent above at the same period in 2019 (second graphic):

Sanchez and Barleta note that freight rates from Asia Pacific to the US West Coast began to increase rapidly after the Chinese New Year (which is always associated with a seasonal decline) and in Europe since May. On the other hand, rates to South America East Coast remained in the markedly declining trend of cargoes mobilised, but already in May, they show a reversal of the trend. In summary, four of the five major trade routes show an increase in freight rates in May and a completely different performance from what happened in the previous crisis.

The situation of the relationship between freight rates and containerised cargoes is similar, in some cases, to the above-mentioned antecedents.

Sanchez and Barleta also state that another thing that might be influencing the increase in freight rates is the lack of containers in ports and the whole tangle of problems in logistics that are caused by this.