CMA CGM to pioneer LNG-powered containerships on the trans-Pacific 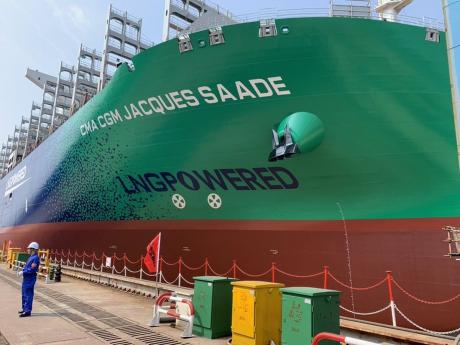 French container line CMA CGM is to start deploying the first of six 15,000 teu (twenty-foot equivalent units) LNG-powered newbuildings (newly built vessels) on the trade between China and the US West Coast, starting in October 2021, with all six operational by the end of 2022. Marcus Hand, writing on the Seatrade Maritime News website, seatrade-maritime.com, reported that this announcement was made at TPM21 by CMA CGM Chairman and CEO Rodolphe Saade.

TPM is a conference for the trans-Pacific and global container shipping and logistics community and was staged virtually from February 25 to March 2 this year. Saade is reported as saying that Maersk “will be the pioneer of the deployment of LNG vessels from China to Los Angeles/Long Beach by the end of this year”.

The Seatrade Maritime News report states that CMA CGM is the first line to operate LNG-powered ultra-large boxships, and five of its series of nine 23,000 teu gas-fuelled newbuildings are now in the operation on the Asia-Europe trade.

While LNG remains a fossil fuel and only reduces CO2 emission, Saade believes it is the best option available today, and that as a shipping line, they need to take action now.

“We can talk about projects we will be able to deliver in 10-15 years, but what is important is, what is it we are doing now? At CMA CGM, we have decide to be proactive and take action. That is why we decided to move forward with vessels that are LNG-propelled,” he said.

The entire report by Seatrade Maritime News may be viewed at ‘CMA CGM to pioneer LNG-powered containerships on the trans-Pacific’ on seatrade-maritime.com.