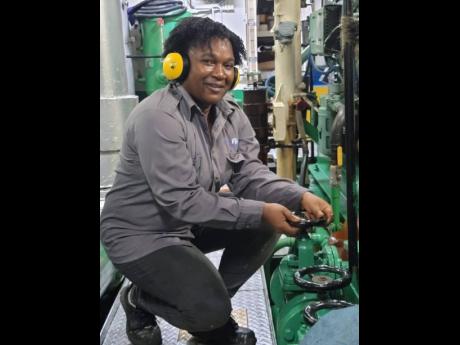 When the legendary James Brown sang It’s A Man’s World, he was not referring to the shipping industry, but it could well be applied, since women make up only two per cent of the world’s 1.2 million seafarers, according to the International Maritime Organization (IMO).

However, women are increasingly beginning to occupy space in the male-dominated field and make their case for equal opportunity and access to employment.

One such trailblazer is Tameika Bucknor-Lynch, a second engineer at the Port Authority of Jamaica (PAJ), where her desire for a challenge and to travel prompted her entry into the maritime field.

The Ulster Spring, Trelawny native’s rise to her current post was not achieved overnight, having previously worked in several capacities, including as an auto mechanic, cargo ship cadet and forklift mechanic, before her move to the PAJ in 2011.

Bucknor-Lynch, 36, says her duties include the planned maintenance and daily servicing of ships’ equipment, engine room observation and maintaining machinery parameters while sailing.

But while those duties may seem daunting to some, she said there are greater issues affecting mariners locally who want a “fair future for seafarers”, as promoted by the IMO for its annual Day of the Seafarer. “The challenges faced by the marine engineer in Jamaica are that we do not have a shipping industry, so there are less opportunities to get jobs in Jamaica,” she said. Additionally,“the necessary tools, spare parts and equipment to carry out the job are unavailable at times,” which she said is compounded by the “lack of experience and expertise from others in decision making”.

The absence of equity in the recognition of work, value and salaries is also another major detriment to seafarers who have been among those most relied on globally for the delivery of food, medications, energy supplies and more, since the onset of the pandemic last year.

Despite those setbacks, the Jamaican-German Automotive School and the Caribbean Maritime University (CMU) past student is undeterred and working towards her objective of contributing to the industry’s growth and development. “My goal is to do my part as an engineer and go beyond the general expectation,” she said, adding that she wants “to grow and advance through excellent work within the industry, using my acquired skills and knowledge to achieve optimum performance and expertise which will help my fellow engineers and the industry to grow.”

After a decade at the PAJ, Bucknor-Lynch shared one of her most perilous moments yet. “One of my most memorable experience was on a trip from Kingston to Montego Bay. We had sailed out of Kingston Harbour (and) on reaching Portland Point, we lost propulsion due to a broken hydraulic line. Upon informing the captain, a decision was made to anchor although the sea condition was not favourable as we were experiencing swells as high as two to four metres, causing the vessel to roll, pitch and heave. Despite the condition, my chief engineer and I kept our composure and, with quick thinking, replaced the broken line with a hydraulic marine hose. We were then able to return to base.”

Ultimately, Bucknor-Lynch shared that, for there to be a “fair future for seafarers”, they must operate under the same system and maintain the similar standards. This would involve a “purpose-driven maritime institution that targets international training needs and delivery on a timely basis”.

Further, she said ships and personnel within Jamaica’s maritime borders should maintain the international standard of payment and equity, in treatment in keeping with the Maritime Labour Convention and International Labour Organization and to see the development of modern legislation for the Jamaica seafarer”.

Day of the Seafarer will be commemorated on June 25 with a series of activities for maritime workers planned by the Maritime Authority of Jamaica, PAJ, CMU and the Shipping Association of Jamaica.