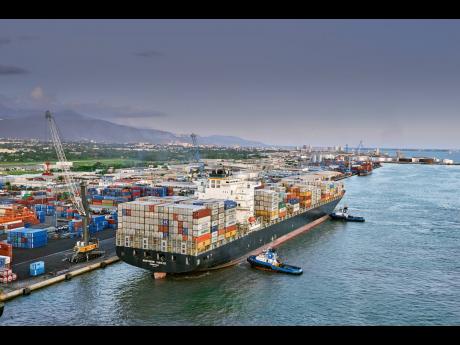 Contributed
Higher-than-normal freight rates are expected to continue throughout the year, at least.

The cost of moving goods across the world has increased significantly over the past year, and shipping companies are warning that customers and consumers will likely feel it in their pockets soon.

With an estimated 80 per cent of global trade being moved by sea, general costs to Jamaicans are expected to increase as shipping rates climb.

Neil Smith, managing director of Regflo Agencies Limited, said the high demand for containers and space on vessels sailing from the Far East are significant contributors to the price hike. Added to that, fuel prices are at their highest levels in five years, he continued.

“We have seen a dramatic increase in rates for both LCL (less-than-container load) and FCL (full container load) shipments from the Far East. We handled a LCL shipment of truck parts for a client and the freight rate was more than double the cost of a FCL shipment (40 feet container) from the same supplier back in 2019. The order was placed in mid-2020, but the order was only filled and shipped at the start of 2021. When the order was originally placed, the freight rate quoted was a quarter of what was actually charged when the shipment arrived,” Smith said.

Brokerage Manager at Pérez y Cía, Natasha McFarlane, shared his sentiments, stating that current market demand outperforms supply, and that the recent blockage of the Suez Canal by a vessel as well as COVID-19 have contributed to “huge imbalances” in prices, with freight rates increasing by as much as 225 per cent.

At least one large local manufacturer has warned of looming price increases driven by the increased prices and lack of containers. “Shipping costs have gone up more than 300 per cent. This is compounded by a lack of containers, which has created disruption in supply chain logistics. Many of these commodities serve as raw material in our manufacturing processes: wheat, corn, sugar, edible oil, feed ingredients for the cows,” shared Seprod CEO Richard Pandohie in a recent Gleaner article.

The impact is clear for some local companies, such as Pérez y Cía, which has experienced a decrease in volumes, according to McFarlane. RegFlo has also suffered a hit to its bottom line. “Based on the increased prices and extended time frames, we have had much less inquiries for our service. We like to be precise with our quotations and with the fluctuations in price and transit time, this has not been possible,” Smith said.

Not only that, but customers of maritime entities should expect to pay higher customs duties, Smith revealed, as these charges are “calculated based on CIF (cost, insurance and freight), not just invoice value. This calculation is often overlooked and will have a major impact on pricing of products.”

Despite efforts to curb the pandemic spread and return to some semblance of trade normality, a shortage of vaccines has hampered access in territories outside of North America and Europe, which account for much of the world’s roughly 791 million fully vaccinated people.

With many nations attempting to inoculate roughly 70 per cent of their populations to reach herd immunity, this delay will prolong the pandemic’s impact on the industry. McFarlane said, “High freight rates will continue into the third quarter,” adding that “there is no indication of rates going down at this time”.

The lengthy timeline for possible lower rates is shared by Smith, who also warned that pre-pandemic rates may not return at all.

He said, “My guess is that costs will go down, but not for one to two years. While the COVID pandemic remains, we could possibly see more outbreaks that lead to closing of manufacturing plants in China and other industrialised countries in the Far East. The backlog of orders that these shutdowns create leads to the high demand, which keeps freight rates at their peak. Once this backlog has been cleared, we will see a gradual return to normalcy, but I would not expect the 2019 rates to return until 2025, if ever.”