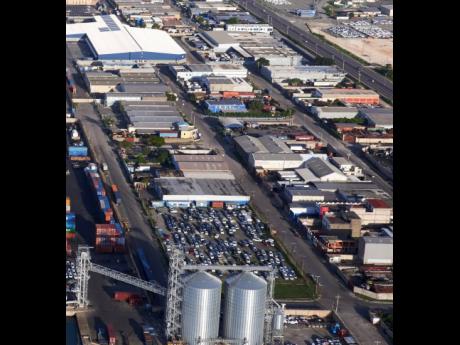 Contributed
Newport West is prone to flooding due to inadequate drainage and improper garbage disposal.

Just about a month and a half in, Jamaica has had its first brush with what forecasters say will be yet another active Atlantic hurricane season.

As weather conditions deteriorated late Saturday, June 3, into Sunday morning, many wondered what the season’s fourth named system, Elsa – which was downgraded from a hurricane to a tropical storm on its approach to Jamaica – had in store for the island, which has been spared the brunt of most storms since Hurricane Sandy in 2012.

None more so than interests at Newport West, a hub of industrial activity for the nation’s shipping industry, which must contend with the impact of such storms on their business lines, and on their commercial operations in the area, which is prone to flooding.

Despite avoiding a worst-case scenario, Newport West was not completely spared the effects of Elsa. With Hagley Park Road, Marcus Garvey Drive and other roadways leading to the area inundated, several businesses were adversely impacted by floodwaters.

This was the situation at the property which houses the Seaboard Jamaica offices, said Corah Ann Robertson Sylvester, chief executive officer and vice-president of the Shipping Association of Jamaica.

Robertson Sylvester said improving Newport West’s resilience to squalls requires the upgrading and cleaning of existing drains “to accommodate the increased storm water run-off from all areas, from Three Miles to Greenwich Farm,” a task she noted Kingston Wharves has undertaken in the lead-up to the rainy season in the past.

Additionally, she said infrastructural improvements to drainage in surrounding areas, including from Half-Way Tree to the waterfront, are needed.

“There seems to be a challenge with drainage. It is evident to the naked eye that the water is simply backing up on the roads. The fact that we are literally located on the seaside makes it ridiculous that we experience the severity of flooding that we do in our area,” they stated. “As the main gateway for imported and exported goods to and from the island, the Newport West area needs more direct attention. A proper assessment of the area needs to be done, with a view to correcting what has been a long-standing problem of flooding.”

NOT LIMITED TO HURRICANE SEASON

Hamilton and Johnston further noted the problem is not limited to the hurricane season. “As an island, we need to take much more civic pride in how we treat our environs. The garbage that is improperly disposed of has to go somewhere, and when the rains come it ends up right in front of our office,” they said.

Grant noted that upgrades to the major thoroughfare and blocked drains have contributed to the area’s problems. She said, “Necessary work needs to be done on the drains, and the median on Marcus Garvey needs to be removed or cut to allow water through. It needs to be acknowledged that this has been an issue for many years; it has only gotten worse.”

Managing Director of Maritime Solutions Jamaica Limited Carol Dixon said the issues that plague the area have been present for years, agreeing that the primary problem is the lack of proper drainage, which affects access to the area.

Additionally, she said, “proper disposal is required for garbage/refuse that have been left on sidewalks,” singling out First Street, where her business is located, as one of the affected areas.

With the hurricane season expected to last until November 30 officially, it remains to be seen if recent events and experience will aid the industrial community to better prepare, even as it awaits municipal intervention to curb its challenges.

The US-based National Oceanic and Atmospheric Administration predicts there will be between 13 and 20 named storms, of which six to 10 could become hurricanes, and three to five being major hurricanes ranging from Category 3 to Category 5.

The past six years have seen above-average hurricane seasons, with 2020 recording 30 named storms, the most ever in a single year and more than twice the annual average.