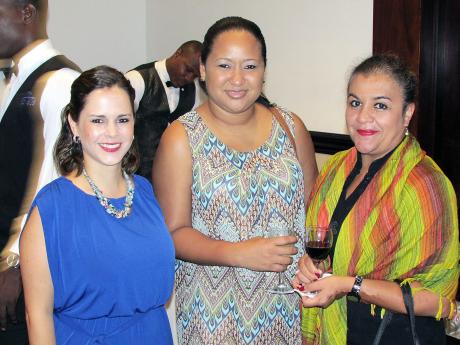 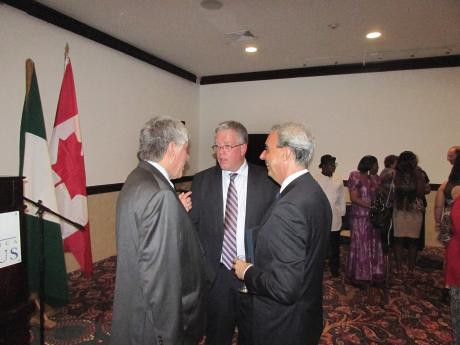 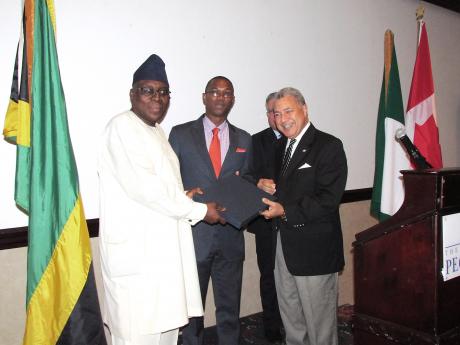 Contributed
High commissioner of the Federal Republic of Nigeria, Olatokunbo Kamson (left) is presented with a parting gift from the diplomatic corps represented by José Tomas Ares (right) and presented by Arnaldo Brown, minister of state in the Ministry of Foreign Affairs and Trade. 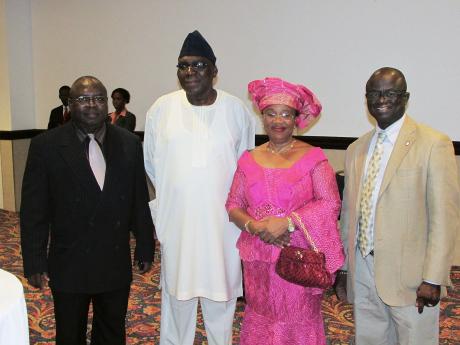 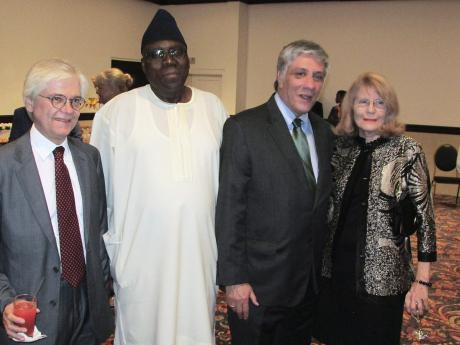 While Kingston warmly welcomed a light drizzle on Thursday, July 30, inside the Legacy suite at The Jamaica Pegasus hotel was bittersweet for the diplomatic corps which said goodbye to two of their very own - high commissioner of the Federal Republic of Nigeria, Olatokunbo Kamson, and Canadian High Commissioner Robert Ready.

Specially invited guests gathered in true ambassadorial fashion, sipping glasses of wine with the option of a wide array of natural fruits juices to choose from.

Given the difficult task of bidding farewell to these men who were not only ambassadors but friends, was ambassador of the Dominican Republic and head of the diplomatic corps, JosÈ Tomas Ares German. He spoke of the ambassadors' tenure noting that when they depart this month, they will be greatly missed.

After offering a gift as a token of their appreciation from the diplomatic corps to the leaving ambassadors, both honourees took to the stage to in turn, offer words of thanks. Kamson, short in his speech, declared that he was indeed grateful for this occasion, and the manner in which the event was put together. In addition, he said it showed the love that they share and for that he was thankful.

He noted that his time served in Jamaica was a dream come true, and he now takes his leave with mixed feelings. He is thankful for the support and solidarity among the ambassadors, the Ministry of Foreign Affairs and Foreign Trade, and the Jamaican people, for accommodating him and his wife.

Ready, on the other hand, had a lot more to say of his time in our beloved island. He started out by noting, "One of the things about being a diplomat is that once you think you're on top of your game and think you've got it all figured out, you have to go," which was followed by bouts of laughter.

He took the time to reflect on the three wonderful years he has spent in Jamaica, and, in doing so, thanked all who made his stay not only possible but enjoyable. He made special mention of his wife Joanne, who rolls up her sleeves and gets to work, and who supports him no matter what. "We've seen so much of Jamaica, toured with locals just about everywhere, and we have had a good time. I've given eulogies for people I don't know, painted schools, participated in 5Ks, and supported fashion shows. But, Jamaica has seen so much of us."

He went on to mention the peanut man on Seymour Avenue, and the walkers who would pass by working up a sweat: they drew both he and his wife closer to the real Jamaica. And while they return to Canada as ordinary people, they will return with extraordinary memories from Jamrock.

The head of the diplomatic corps then closed off the formal proceedings, encouraging all to continue to indulge in conversation with friends and bask in the refreshments provided.