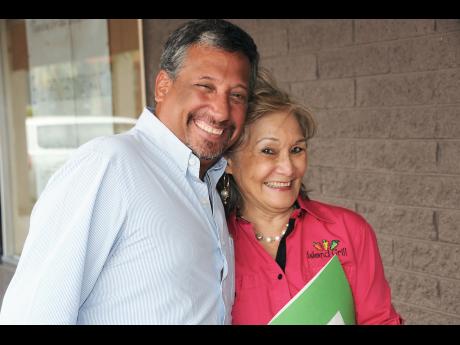 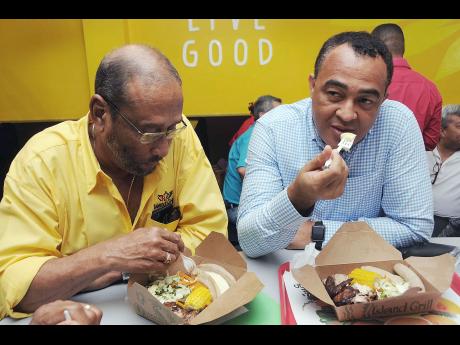 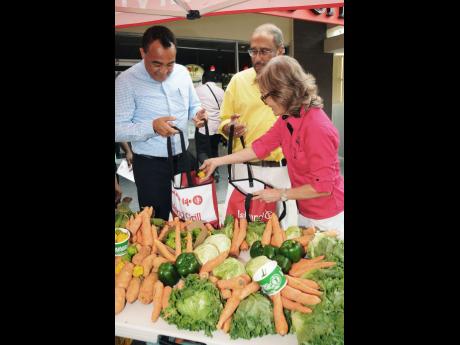 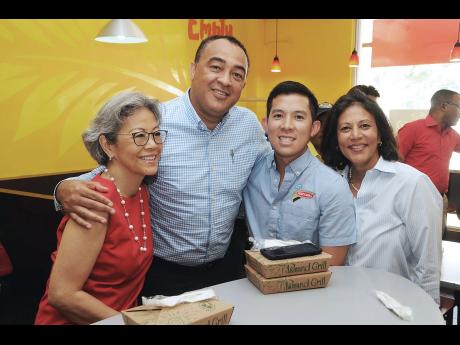 Lionel Rookwood
From left: Lori-Ann Lyn of CB Group, Minister of Health Dr Christopher Tufton, and Craig and Heidi Hendrickson of National Bakery join in for a priceless photo moment. 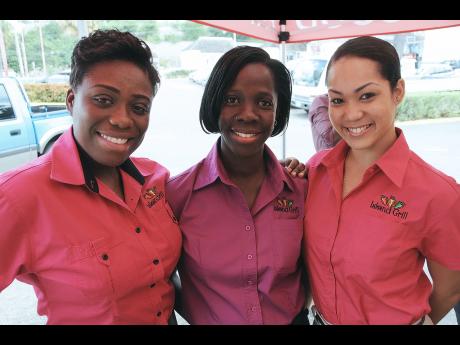 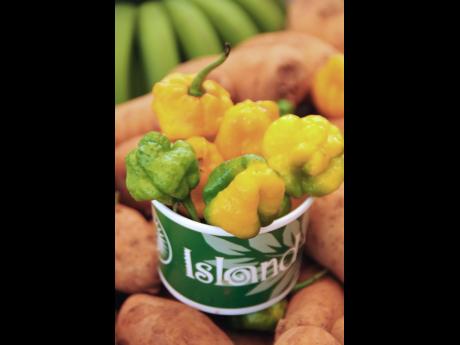 Supaah Food, anyone? Well, Island Grill has you covered by satisfying your appetite one healthy and hearty bite at a time. The local food chain launched its Supaah Foods menu at their Manor Park location on Wednesday to the delight of sponsors and specially invited guests.

If you don't know what Supaah Food is, picture eating a natural rainbow green callaloo, orange pumpkin, blush-yellow breadfruit or sunshine-yellow corn - to be indulged with your choice of Island Grill's traditional jerked, barbecued, curried or fricassee chicken or veggie stew.

Greeted by beautiful produce on the outside of the restaurant, courtesy of the local farmers on board, guests received a warm welcome from staff before making their way into the venue.

Expanding their mantra, 'Eat Good, Live Good', Howard Mitchell, chairman of Island Grill, explained that Jamaica is covered with popular superfoods that the world is excited about, "We need to eat locally and think globally," he added.

He introduced the minister of health, Dr Christopher Tufton, who highlighted that Island Grill is the food chain of choice for his family. He noted that he has seen the company's evolution, promoting healthy living, and commended them for providing healthy options for Jamaica. He noted that the biggest issues facing Jamaicans are unhealthy food choices and physical inactivity. Island Grill's tasty initiative, he said, is the perfect fit for the country's Jamaica Moves campaign. "It looks good, it feels good it smells good, so I'm just waiting on the taste," he declared of the Supaah Food options.

Farmers Llewellyn Grant and Andrew Warwar also took to the stage to share their appreciation for being a major part of the Island Grill family. The lovely and vivacious CEO, Thalia Lyn, closed the formal proceedings by thanking everyone - from the minister of health to her local farmers, to her Best Dressed and CB Chicken family, board chairman, directors, family members, bloggers and foodies - for making this new venture possible.

Salivating at the sound of chopping during Lyn's speech, many were eager to savour the flavour of the Supaah Food for themselves. So what are you waiting for? Try Island Grill's Supaah Food today!