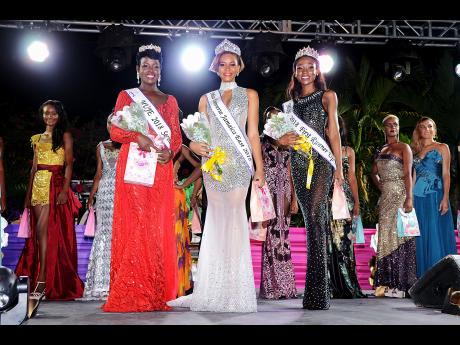 When MUJE franchise holder FitFarm Fitness Club and Pageant director, Sharon Beckford, teamed up to make the eliminations for the MUJE public, it was a good idea, but how do you top a public elimination? With a great coronation.

The MUJE Coronation was themed 'The Garden of Eden', and host Talia Soares stayed true to the theme in her attire with her Africanesque bodysuit and a handmade belt of leaves. Her co-host, Supa Hype, brought his vibrant personality and charm.

Ashe opened the show and left their passion and moves all on the stage, setting the tone for a vibrant show. The 21 girls came out in lovely fuchsia swimwear by DNR Collections to perform their opening number to the musical styling of singer Khalia Million.

The competition gave the women the full Miss Universe Jamaica experience with question and answers, and the evening wear, which included pieces by Hope Wade from New York City, one by Mannequin Pieces worn by Kadejah Anderson, while the rest were by private collections.

By the time the top three were to be announced, you could hear a pin drop, as they called up Miss One Stop Computer, Sara-dee Palmer; Miss Mannequin Pieces, Kadejah Anderson; and crowd favourite Miss Chik 'n' TrendE, Kayla Smith. But the true nail-biting moment was to announce the queen. Kayla Smith was announced as second runner-up, and Palmer and Anderson held hands just before they announced the winner, which was Anderson.

She was brought to tears, but it was truly not much of a surprise as she nabbed several of the sectional prizes, which included Altruism (charitable), Best in Swimwear, and shared Best in Evening Gown with Kayla Smith.

It was a fun night and the top three girls are all looking forward to being part of the upcoming national competition.