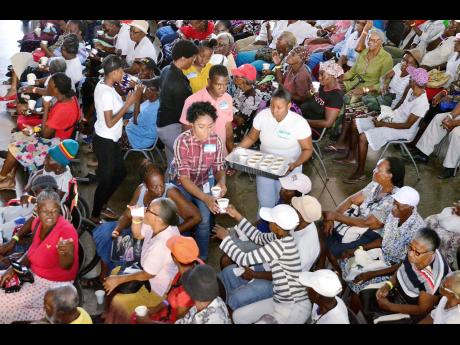 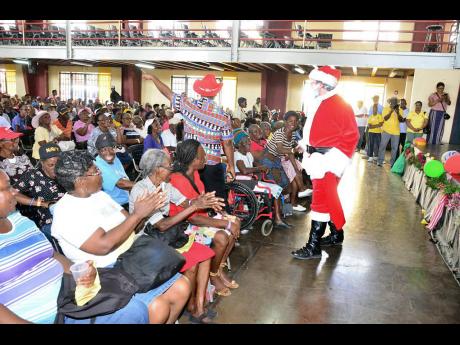 Contributed
Santa Claus came to visit the 750 senior citizens during their annual Christmas treat hosted recently by the Rotary Club of Kingston. They were transported by the club to and from the Wolmer’s Boys’ School for the event where they were entertained, served a meal and presented with gifts.
1
2

It was a joyous day for over 750 elderly Jamaicans who were transported from various senior citizens' homes in Kingston to be fÍted and entertained for eight hours at the annual Rotary Club of Kingston's Senior Citizens' Christmas Treat held recently at the Douglas Orane Auditorium at the Wolmers' Boys' High School. Over 20 companies contributed cash or kind to the event.

In addition to being served a meal, the special guests were handed gifts of clothing, food, toiletries, and blankets. When the infectious music rang out from the Akindele Sounds, the Bethel Steel Band, and Errol Lee of the Bare Essentials Band, many of the senior citizens jumped to their feet and danced with all the energy they could muster. They also sang lustily in the singalong segment. The fashion show was a treat in itself when the seniors took to the runway to showcase their modelling styles in outfits contributed by members of the Rotary Club of Kingston.

According to Linval Freeman, president of the Rotary Club of Kingston, "The event took quite a bit of planning and co-ordination with the administrative staff of the various homes, especially regarding the pick-up and delivery of each special guest."

He said a number of the senior citizens have contributed to nation building but have received little or no recognition from the society and - in some cases - from their families.

"It is our hope that the annual treat adds a ray of sunshine to their lives, especially during the festive season. As a nation, and as family members, we must remind ourselves daily of the sacrifices the seniors in our society have made so that our lives could be better. In return, therefore, family members should show appreciation and be there for them, while as a nation, we must demand that policies are implemented to protect the elderly, thereby demonstrating our sense of responsibility as a people," said Freeman.

The club president also noted that the major project could not have been the success it was without the support of corporate Jamaica.

"To have over 20 companies donating cash or kind to this event is remarkable, and we are very grateful to them," Freeman said.

"In addition to giving of their time, members of the Rotary Club of Kingston also donated cash towards the project," Freeman noted.