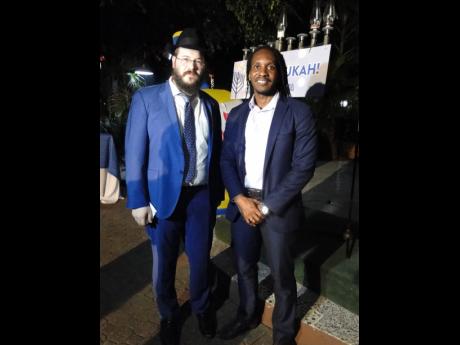 Paul Williams
Rabbi Raskin Yaakov (left) of Chabad of Jamaica and Junior Minister in the Ministry of Culture, Gender, Entertainment and Sport Alando Terrelonge at the celebration of Chanukkah 2018. 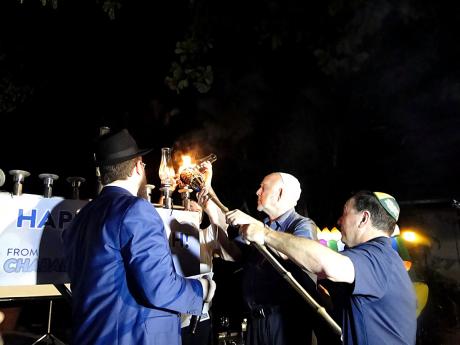 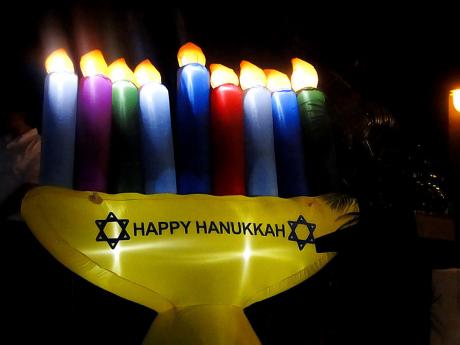 Paul Williams
Chanukkah, or Hanukkah is one of the most important festivals on the Jewish calendar. 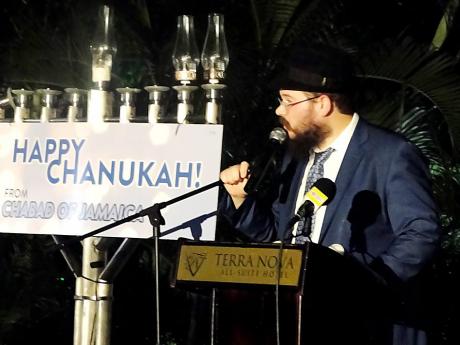 Members of the Jewish community recently gathered on the grounds of the Terra Nova All-Suite Hotel in St Andrew to celebrate Chanukkah (Hanukkah), one of the most important festivals on the Jewish calendar.

Known as the Festival of Lights, which lasts for eight days (this year, from Sunday, December 2, to Sunday, December 9), Chanukkah is held to commemorate the Jews' victory, around 140 BCE, over the Greeks, who occupied Jerusalem in 313 BCE.

The victory of the Jews over the Greeks, the most powerful army in the world at the time, was a surprising one. Before the Greeks were driven out of Jerusalem, they contaminated the olive oil used to light the menorah (lamp) in the Holy Temple. The Jews found a jug of pure olive oil under the floor, and though that oil was expected to last for one night, it lasted for eight days.

"The miraculous victory, culminating with the dedication of the sanctuary in Jerusalem and the rekindling of the menorah, which had been desecrated and extinguished by the enemy, has been celebrated annually ever since during these eight days of Chanukkah," the organisers said.

Since 2014, Chabad of Jamaica has been organising and hosting this commemoration, the highlight of which is the brief menorah-lighting ceremony. The menorah is one of the oldest symbols of Judaism and is represented by a set of seven or eight branches of light. It is regarded as an icon for Jewish culture and faith.

"Lighting the Chanukkah menorah, especially, is a symbol of the triumph of freedom over oppression, of spirit over matter, of light over darkness," the organisers also said.

Before the lighting, Rabbi Raskin Yaakov implored everyone at the gathering, including the Jews themselves, to treat one another with respect and equality and to get rid of concepts of divisions and factions.

In the conclusion of his address on behalf of Prime Minister Andrew Holness, Junior Minister Terrelonge said, "Those of us who have triumphed over the years know that it is only the illumination of light that can bring the world the peace that it truly deserves ... . And tonight, as we light the light of love, tolerance and acceptance, let us illuminate our world and shed light against the darkness, intolerance and hate. Let us, together, by lighting these candles, forge a better world under the light of hope and peace in the spirit of one humanity."

The night was also marked by the eating of Jewish foods and singing and dancing to Jewish music.