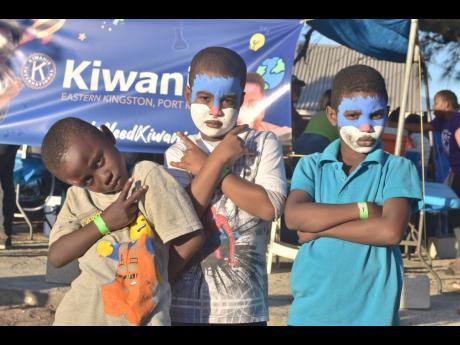 Contributed
Children of the community posing and showing their Face art work at the Kiwanis Club of Eastern Kingston and Port Royal childrens treat held on January 12, 2020 at the Port Royal Beach Park. 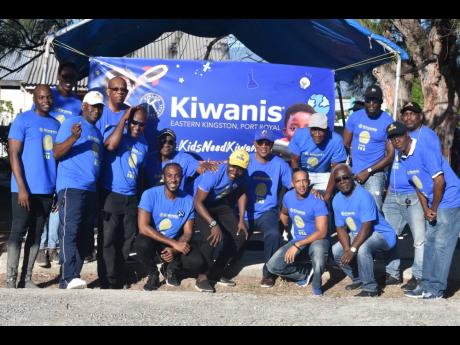 Contributed
Members of the Kiwanis Club of EKPR pose for the camera following a back-to-school treat held on January 12, 2020 at the Port Royal Beach Park.
1
2

The Kiwanis Club of Eastern Kingston and Port Royal (EKPR) has, as a part of its association with the Builders’ Club of Port Royal Infant and Primary School, for many years put on an annual Christmas treat for the children of the school. This project began in December 1994 and has continued for the last 26 years. Over the years, this project has evolved from a school-based indoor Christmas function to a more expanded community event now held in January of each year.

The present location of the treat is The Port Royal Beach Park which facilitates the outdoor activities, other varying forms of entertainment, as well as the large number of children and adults who attend the event each year.

The Port Royal treat not only has the enviable distinction of being the event that kick-starts the Kiwanis Club of Eastern Kingston and Port Royal’s (EKPR) annual calendar of events, it is also EKPR’s signature project, the club’s biggest event in terms of budget, scope, the number of beneficiaries and sponsorship. And certainly, for the Young Children Priority Committee, it is the most prominent project for the year.

On January 12, members of the East Kingston & Port Royal Kiwanis Club joined hands with members of the Circle K International, which is a collegiate service organisation of Kiwanis, as well as a number of individuals, sponsors and volunteers to stage the Port Royal treat. Tori-Ann Fuller, the Caribbean Maritime University Circle K vice-president, said the most fulfilling thing for her was the look on the children’s faces when they realised that others had an interest in them and someone was willing to play and spend time with them.

Over a six-hour period, over 100 children, ranging in ages from three to 11 years, were fêted and provided with a wide variety of fun activities, goodies, and presented with toys and back-to-school items.

Tadmar Moore, president of EKPR, spoke briefly on his passion for giving back and the execution of the event,

“As president, I know there is nothing as ‘taking a break’. I had to ensure that all was executed and that everyone left happy and satisfied, patrons and volunteers alike. Satisfaction became me as I saw smiles on their faces, and I know there was an impact through this project. I had an amazing team working on the ground ,and I am content knowing that the children of the Port Royal community left happy.”