Caroline Brown: From adversity to triumph 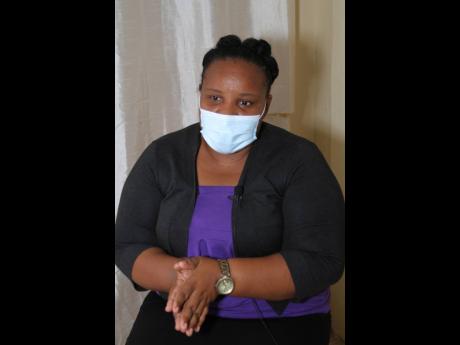 Nathaniel Stewart
Caroline Brown, who became a mother at 14 years old, explains that her life has been transformed by the impact of others and her growing faith in God.

TODAY, MOTHER of two Caroline Brown can look back on her life and give God thanks as she reflects on what she had to overcome to achieving her bachelor’sdegree in church administration and being a youth mentor and a youth president.

Her daughter graduated from The University of the West Indies with a degree in hospitality and hotel management, and her son is now in his final year at the University of Technology (UTech) pursuing computer science studies.

Sharing her journey with The Gleaner, she said she grew up as a ‘privileged’ child with her father, but said she went through the rebellious phase after she did not get what she wanted, or her father did something she did not like. She threw tantrums and rebelled, and it was during that rebellion stage she got pregnant.

“I had to drop out of a prominent high school in May Pen. I was so ashamed, and I hid myself for the nine months,” she shared with The Gleaner.

Brown said she realised that she was not ready to be a mother and found the whole experience devastating. Added to that was her father’s disappointment in her, which him sending her to stay with her mother.

“I grew with my father most of my life and didn’t know my mother that well, so I was in the whole transition thing; and I didn’t really bond with my mother, as I didn’t grow with her,” Brown reminisced.

She said at one point she told a cousin of hers to give her a ladder so that she could climb up and jump off in an effort to end her life, as she didn’t know what to do.

She eventually got over that hurdle and went back to school, but less than four years later, in fifth form, she again got pregnant while being in an abusive relationship. She ended up being expelled from school, as, she said, there were days when she went to school with a black eye or was missing because of the domestic issues.

Fortunately for her, she said a teacher at the school had her best interest at heart and would send her notes from school, affording her the opportunity to sit her subjects, and seeing her passing four out of the five subjects she sat. It was a balm for not being able to graduate.

After she had her son, Brown said having two children and being a single mother traumatised her, as their father migrated and communication ceased after a while.

Reflecting on raising her children, Brown said there were days when she only had bus fare to give them. and there were also days when they missed school for a week at a time.

However, in the midst of the struggle, they found favour with teachers who ensured that they got lunch at school.

Being a single mother took a toll on her; she shared there were days when she felt like running away.

There were days, she said, when she had to go ‘beyond the norm’ in taking care of her children, something she describes as “not being any different from standing up on the corner” in order to make a quick money.

“I remembered on one occasion when a bottle of tablets was on the dresser and I heard a voice say, ‘Just end your life. You mess up your life, you worthless, you got the opportunity to make the best of where you were, but yet you chose a wrong path. Just end your life, because it doesn’t make any sense, and people will take care of them because you are not doing a good job, anyway’,” she shared.

Her life turned around in 2003 when she gave her life to the Lord and meeting Pastor Ann Marie Richards of Stars of Hope in May Pen. Battling with low self-esteem and being a less-than-favourable mother to her children, her relationship with the Lord and being mentored by Richards were all she needed to turn her life around.

Brown said she started focusing on the children, releasing bitterness, anger and unforgiveness.

“Mrs Richard is not only a pastor and a mentor, but was like my mother as she ensured that with the little that she had, I had something out of it, too.”

Another victory that Brown is celebrating is that she is now a grandmother, with her granddaughter being born in wedlock something that eluded her mother and herself.

For other single mothers out there facing the same struggles, Brown has only one advice for them, “Hang on to hope and never give up.”