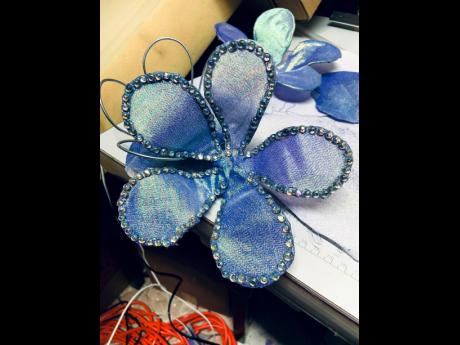 Contributed
Ernesto Castro made the costume’s harness and backpack, down to the blue and purple flowers of the Lignum Vitae-inspired design. 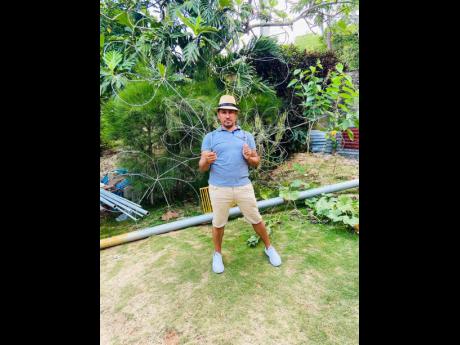 Contributed
Castro shows the range of movement of the harness and backpack. The Dominican Republic-born designer said the entire design was put together in less than 48 hours. 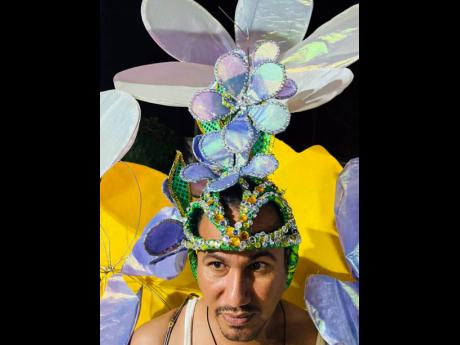 Contributed
The ornate headdress worn by Miqueal-Symone Williams is donned by Castro during its construction phase. 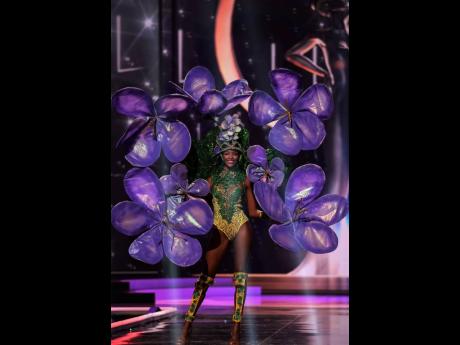 The Miss Universe Jamaica Organization is tooting its horn after Thursday’s parade of the national costumes on the 69th Miss Universe pageant stage. Miqueal-Symone Williams has made Jamaicans at home and in the diaspora feel proud as they watched her walk in a Lignum Vitae-inspired design.

“Ernesto made the harness and back piece, which was the central portion of the design, and he ended up crafting a larger-than-life masterpiece, which was just fantastic, and so we ran with it,” McDermoth told The Sunday Gleaner.

He added, “With Thursday’s parade, we are feeling good just seeing it on stage and how Miqueal looked in it.”

While noting that there are no particular lessons learnt from the uproar in 2019 over the ‘The White Witch of Rose Hall’ costume worn by then Miss Universe Jamaica Iana Tickle Garcia, McDermoth did note that each year, the organisation tries to “grow and improve”.

AIM TO IMPROVE EACH YEAR

“Every year we try to grow and improve upon the previous years and do so, on all levels, so I wouldn’t say that we [learnt] any particular lessons, necessarily, regarding the national costume. If anything, the big difference this year is due to the pandemic and limited resources.”

Also, having a smaller, more defined team with stronger responsibilities played a role in how everything was pulled together.

“We utilised our team members’ individual talents and resources more efficiently this year than all the other years before,” McDermoth affirmed.

Castro shared the same sentiment, pointing out that “as a team, we worked well by bouncing ideas off each other, and what better to capture the essence of Jamaica and our Miss Universe Jamaica than a flower that is blooming”.

Lignum Vitae is Latin for ‘wood of life’. As Jamaica’s national flower, it is embedded in history for its useful and medicinal purposes, from the bluish-purple flowers and orange fruits to its trunk and its gum (produced from the resin). The indigenous plant is a protected species.

Castro, a Dominican Republic-born designer, who has resided in Jamaica for over a decade, is known for making intricate, playful, imaginative yet lightweight costumes for hotel franchises such as Sandals and Rui, said he was most eager to bring the idea of McDermoth and Williams to life knowing that it was inspired by the Lignum Vitae.

“We, basically, did this in less than 48 hours. This includes sourcing the wire for the flowers and headdress and the material and putting it together,” he said. “Working through the night, we stay focusing on the flowers, which were made so they can be opened and closed or folded easily and is not heavy at all. See from her walk, it was light, and there was no issue to get it packed for her to travel with it.”

“This is such a difference. While I understand the cultural tones of past costumes, even when we consider as far back as the bandanas, this shows that they are fleshing out other aspects of Jamaican culture and life and managed to bring it out so beautifully and creatively,” she continued.

Other standouts in the parade were South Africa’s Natasha Joubert, whose costume was a mural of drawings made by South African children telling their personal pandemic experiences; Miss Universe Singapore Bernadette Belle Ong, who, though she kept it sexy in a sequined red leotard and thigh-high boots, wore the ‘Stop Asian Hate’ message boldly on a red and white cape; and Miss Universe Haiti Eden Berandoive, wore a model of the country’s coat of arms and the Citadelle Laferrière, a historical landmark.

“Our Miss Universe Jamaica walked in it neatly, and I believe it is one of the best national costumes we presented. She did great,” said Smith.

On Instagram, Williams shared that she enjoys watching the yellow butterflies flutter around the Lignum Vitae blossom and explained that flowers are also symbolic to her.

“Flowers are a very special symbol to me as they represent what it means if we trust the process, nurture ourselves, and come into our own - we will bloom,” she said.

Yendi Phillips, who represented Jamaica in the 59th Miss Universe 10 years ago, showed support for Williams under the post. She said, “Absolutely LOVE!!! Literally made me gasp for air. Super striking and beautiful!”

Callese Allen, a legal officer, said Williams had “already made us proud”. “This costume is beautiful, and you wore it with pride and elegance,” she said.