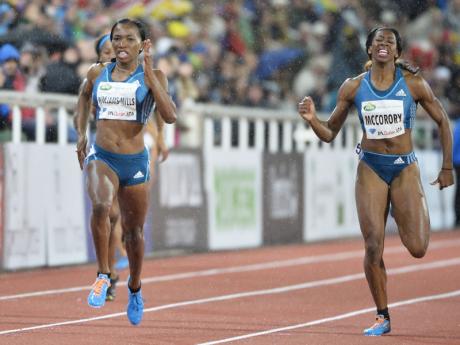 Carter clocked a season's best in the 100 metres, while the 32-year-old Williams-Mills defeated a strong field that included world-leader Francena McCorory of the United States and virtually sealed the Diamond League title for the event.

Carter showed a welcome return to form as he took the men's 100 metres, winning in 9.96 seconds to finish well clear of Trinidad and Tobago's Kleston Bledman, who was timed in 10.09 seconds. Chijindu Ujah of Great Britain surprised Nickel Ashmeade for third, even though both were credited with 10.10 seconds. Diamond League leader Michael Rodgers of the USA was disqualified after a false start.

With temperatures at the track around 12 degrees Celsuis, Williams-Mills brought some real heat. She scorched the track over the first 200 metres and seemed to accelerate over the third, knocking the wind from of sails of the USA duo of Sanya Richards-Ross (50.27) and world-leader Francena McCorory (50.65), respectively.

In the process, Williams-Mills virtually sealed the Diamond League title for 2014.

With only three races to go, the Jamaican's win moves her to 18 points and a comfortable 10-point lead over Richards-Ross, her closest rival.

Recently minted Common-wealth shot put champion, O'Dayne Richards, was unable to replicate his performance in Glasgow, where he threw a personal best 21.61 metres, which would have won him the competition in Stockholm. His best throw of 20.46 metres saw him holding the lead until the third round, when eventual winner Reese Hoffa of the USA took the lead with a throw of 20.55 metres.

Hoffa went on to secure the win with a throw of 21.06 metres in the fifth round. New Zealand's Tom Walsh was second with 20.79 metres, while Germany's David Storl (20.77 metres) was third.

Schillonie Calvert was disqualified for running out of her lane in the women's 200 metres that was won by American Allyson Felix, who defeated the previously unbeaten Tori Bowie to win in a relatively slow 20.85. Bowie stopped the clock in 20.91 seconds as she finished ahead of Joana Atkins, 23.19 seconds.

Queen Harrison won the 100-metre hurdles in 12.66 ahead of Nia Ali 12.96 seconds and Dawn Harper Nelson, 12.99. Sally Pearson was disqualified for false starting.

In the men's 400 metre hurdles, Michael Tinsley made a late surge down the stretch to overtake Javier Culson and claim the win in 49.60. In what was a slow race by Diamond League standards, Culson managed 49.84 seconds, while 2013 World Champion Jehue Gordon was third in 50.13.

Croatia's Sandra Perkovic wrapped up the discus title with yet another convincing win, hurling the implement a solid 66.74 metres to win by more than a metre over Australia's Dani Samuels, 65.70, and the USA's Gia Lewis-Smallwood, 65.21 metres.